Revitalise has a mystery on its hands…

The charity recently launched ‘Wish You Were Here’, a campaign to highlight the importance of holidays, fronted by Revitalise Vice President Dame Judi Dench.

The Wish You Were Here campaign is inviting celebrities to send the charity a doodle or some words about a treasured holiday memory on specially designed postcards.

All the postcards received so far, from celebrities such as Sir Ian McKellen, Emma Thompson, Christopher Eccleston, Warwick Davies and Zoe Wanamaker CBE, have been signed – with the exception of five. Revitalise is now calling on the mystery celebrities in question to come forward and claim credit for their contributions. Here are the five mystery postcards: 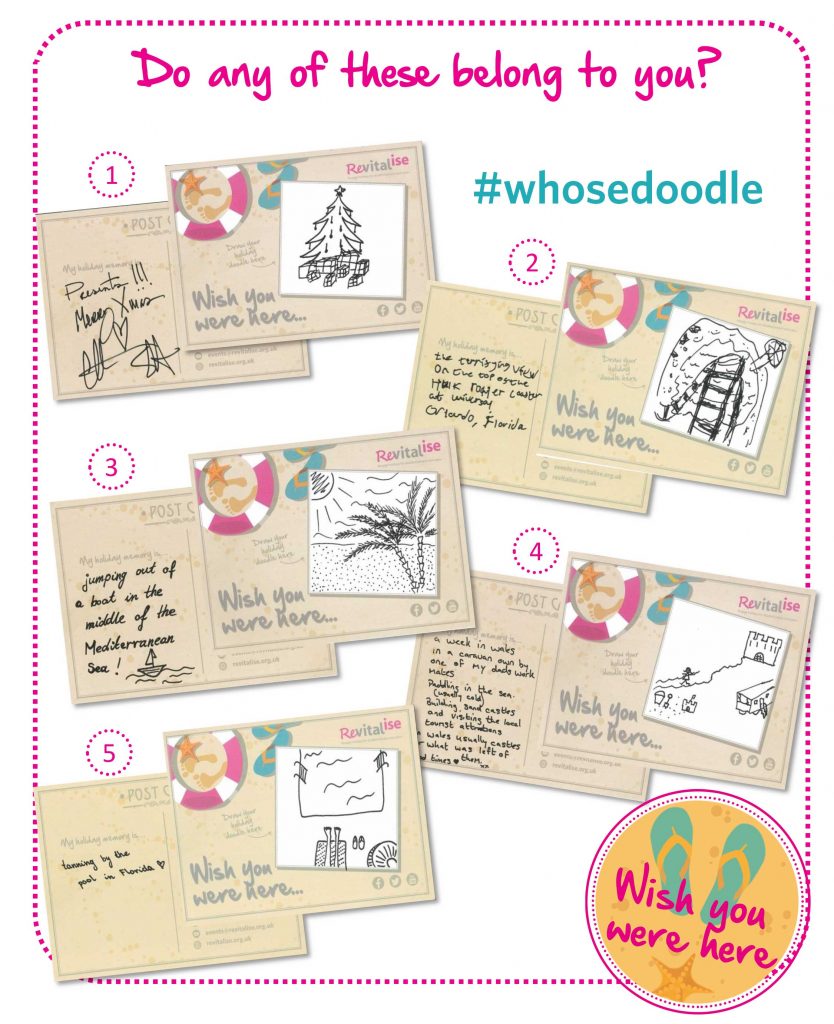 Revitalise’s supporters are also welcome to offer up their own theories and leads as to the identity of the celebrity contributors, including translating the mystery signature. The charity has come up with a special hashtag, #whosedoodle, for use with social media.

The charity devised Wish You Were Here to highlight the importance of holidays, especially for disabled people and carers, who find getting away particularly difficult. The campaign celebrates the sharing of holiday memories, since the opportunity to share one’s stories with others is something we all love about a good holiday.

Revitalise is to hold a special exhibition of the postcards it receives next year. The celebrity contributions will then be auctioned to raise much-needed funds for the charity, so it is important that all the postcards be ascribed to the individuals who drew or wrote them.

“Here at Revitalise we love a mystery, and all we know about these unsigned cards is that each one was contributed by a celebrity. So who are the ‘Famous Five’?

“If we can’t put names to the postcards we won’t be able to auction them, so there’s a lot at stake!

The mystery celebrities are urged to claim their handiwork and send Revitalise a signed picture so that the postcards can be auctioned to raise money for the charity’s vital work. Celebrities can contact Revitalise directly or make themselves known to the charity on its Facebook or Twitter profiles, using the hashtag #whosedoodle.