An employee from Aberdeen Standard Investments’ Aberdeen office embarked on the volunteering trip of a lifetime to witness firsthand the positive impact a charity supported by its own Charitable Foundation is having on the lives of street children in South America.

ChildHope supports work in schools around Lima, the capital of Peru, where despite rapid economic development, around a third of children live on less than $2 a day. Many children are subject to violence in schools, where despite national policy, they are often chastised by teachers using sticks, belts or ropes.

A group of 14 colleagues including Claire Drummond from Aberdeen visited Peru and saw how ChildHope, with its local charity partner CESIP, is helping create safer school environments by promoting the protection of children and young people against mistreatment, sexual abuse and child labour.

Targeted support is being given to eight schools in the poorest communities around Lima and the group volunteered in some of these schools, arriving to a warm welcome and gaining a real insightto the work which goes on within the schools.

Teachers play a crucial role in informing parents on child rights, as well as providing an advocacy support role to underline the importance of keeping children in school instead of sending them to work to earn money.The trip not only brought home the challenges of growing up in economically deprived parts of Lima but also the strength of spirit among young people who want to build a brighter future for themselves.

A night school runs for young adults aged 14 plus who have had to leave school to work. Despite the fact these students have spent the day laying bricks or cleaning houses, their bright smiles and positive energy made a big impact on the Aberdeen colleagues, who were overwhelmed by the kindness, generosity, a positive attitude and smiles that met them throughout their visit which brought home just how driven they are to learn, despite family and work commitments.

The Aberdeen colleagues enjoyed many memorable moments – from the way they worked round language barriers, to teaching children Burns poetry and Scottish anthems like Flower of Scotland and gaining an insight into Peruvian culture too. 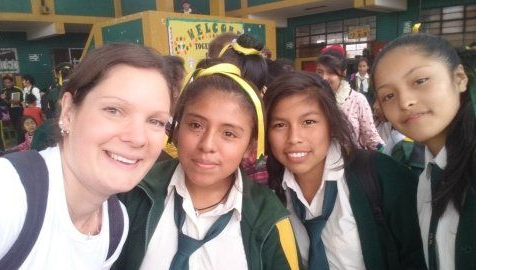 Claire Drummond, head of charitable giving at the Aberdeen Charitable Foundation, was one of the volunteers and said: “It was an amazing experience. ChildHope and CESIP work alongside schools to create a safe place for children to learn and a place where they can speak out when they are upset or unhappy.

“This is evidenced in a newly formed child protection right group made up of an elected pupil from each year group. They are all so proud to be part of a group which encourages school values to ensure everyone is treated fairly both inside and out

“The opportunity of an education is something that many of us take for granted. We worked with children who had often come straight to the classroom from a 12 hour day of hard labour, because they truly wanted to improve their life chances. Many of them spoke of their future aspirations to become lawyers, bankers and engineers which,with the hard work from their wonderful teachers, volunteers and CESIP, isn’t simply a pipe dream.”