The AIDS Healthcare Foundation (AHF) launched its latest outdoor advertising and awareness campaigns with new billboards and bus bench ads placed throughout Southern California. After launching here in the Southland, these two new public health awareness campaigns will roll out nationally to other markets AHF operates in starting in mid-September. 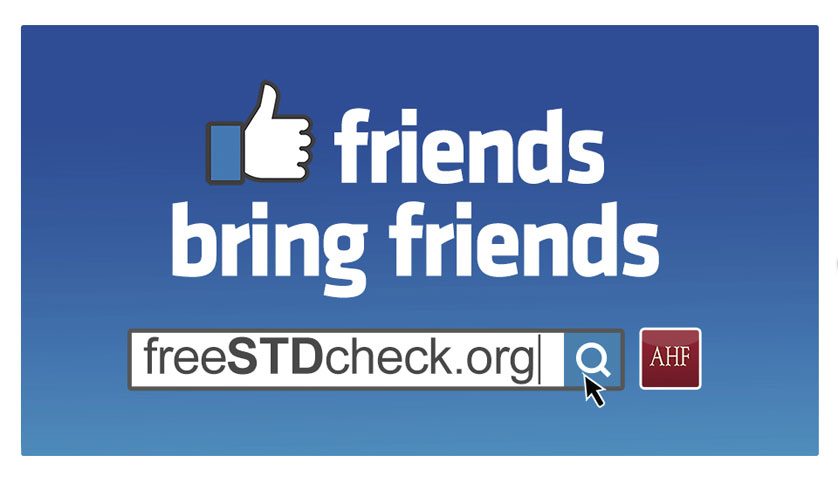 Beginning August 20th, you will find 100 2 x 7 ft. bus benches across Los Angeles wrapped with the message “Friends Bring Friends.” The campaign, which visually plays off of Facebook’s iconic thumbs up ‘like’ icon, encourages people to come with friends to get tested at one of AHF’s Wellness Centers. The more people know their status regarding HIV and other STDs, the likelier they are to seek treatment—a key step in breaking the chain of new or shared infections—and the safer our communities will be. The signage directs people to FreeSTDcheck.org, where patients can go to one of our four testing sites in Los Angeles and get tested for HIV and other STDs at no cost.

For those individuals who do test positive, AHF wants them to know they have treatment options. Hence, our “Thriving” billboard campaign. Beginning August 21th, 18 billboards (15 English and 3 Spanish) will go up across the city of Los Angeles. Each individual billboard highlights an AHF patient with the word “Thriving” in the signage. The purpose of the campaign is to communicate to the public that through medical treatment, AHF can help HIV/AIDS patients (like Playboy Playmate Rebekka Armstrong) survive, thrive and prosper. The billboards drive patients to HIVcare.org.

“We continue to see an inadequate response from the CDC and the drug companies in addressing the growing public health threats posed by these infections,” said AHF President Michael Weinstein. “We need to keep making the public aware of and encourage sexually active individuals to get tested for STDs regularly and be treated, if and as necessary, and to use tools like condoms to prevent or reduce the likelihood of possible infections.”