Badia Spices, one of today’s most prominent family owned and operated Hispanic food companies is proud to announce that they have once again partnered with National Breast Cancer Foundation, Inc.® (NBCF) for the 7th consecutive year to honor of Breast Cancer Awareness Month.  Through this charitable initiative, Badia Spices aims to promote awareness for breast cancer at an international level, while raising funds to support the Foundation’s mission of Helping Women Now® through early detection, education and support services. 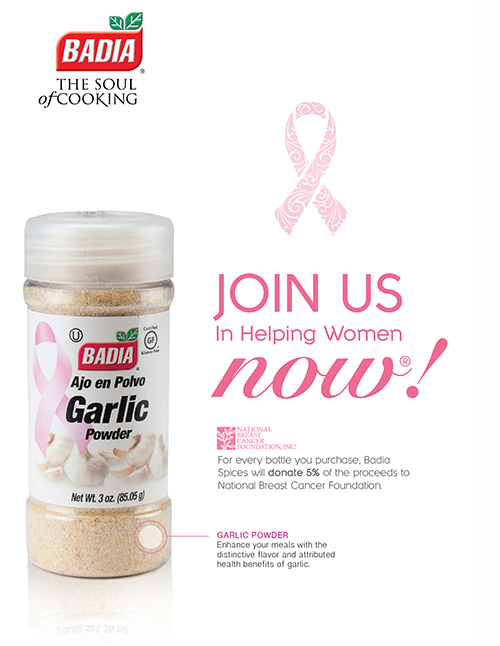 National Breast Cancer Foundation was founded in 1991 by breast cancer survivor, Janelle Hail.  After her treatment, Janelle made a commitment to help women around the world by educating them about breast cancer and the importance of early detection. NBCF has received the highest 4-star rating from Charity Navigator, America’s premier charity evaluator for twelve years.  On average, 80% of their revenue is directed to their life-saving programs and NBCF has partners all across the country.

In just six years, with the help of its consumers around the world, Badia Spices has raised over $710,000 to benefit NBCF. Badia Spices’ commitment to once again support NBCF will kick-off with National Breast Cancer Awareness Month starting October 2017 and continue through October 2018. NBCF’s logo will be prominently displayed on all 3 oz. Garlic Powder bottles and Badia Spices will donate 5% of all worldwide sales to NBCF.

“We are so thankful for the continued support of Badia Spices,” said Danae Johnson, Senior Director of Development, NBCF. “The funds they raise will allow us to help women now by providing free mammograms and patient navigation services for women in need across America.”

“As a husband, father of three daughters, and a grandfather of two granddaughters, I am grateful to once again have the opportunity to partner with National Breast Cancer Foundation to encourage and support their work of Helping Women Now® through early detection, education and support services. We are so appreciative of all our consumers around the world who support our philanthropic efforts, and we hope to make a lasting influence on advancing health care for women through our philanthropic partnership with NBCF,” said Joseph “Pepe” Badia, President, Badia Spices.