STOPit Japan Co., Ltd. announces that Hideki Matsui and Matsui 55 Baseball Foundation, Inc., have become supporters of STOPit, the leading technology platform for schools that deter and report bullying and other forms of harmful or inappropriate conduct. 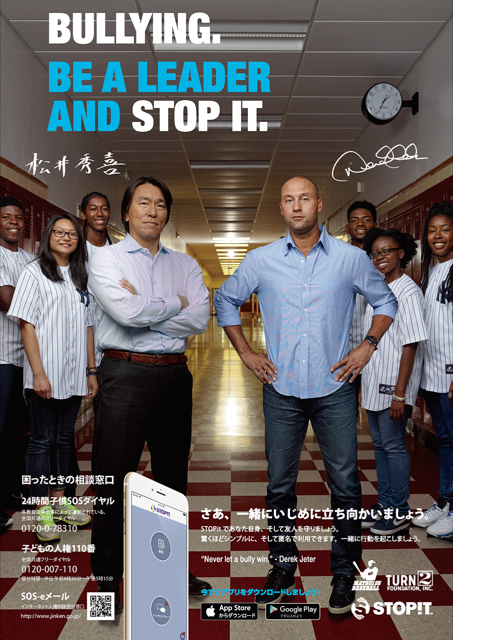 STOPit was formed in 2014 in the United States. Current Miami Marlins CEO Derek Jeter and his Turn 2 Foundation support STOPit, along with the STOPit team in the U.S. and other parts of the world. The STOPit platform consists of a simple, fast and powerful mobile app for reporting, anonymous two-way chat between reporter and administrator (STOPit Messenger) and a back-end incident management system (DOCUMENTit) for administrators. In Japan, STOPit Japan Co., Ltd. (Tokyo, CEO: Daizaburo Taniyama) has distributed STOPit since 2015. Approximately 6,000 schools (3,300,000 users) in the U.S. and 31 schools (16,000 users) in Japan use the STOPit platform.

Hideki has supported a multitude of social action programs both during and subsequent to his career as a professional baseball player. Matsui 55 Baseball Foundation, Inc. is his primary instrument of action. As the founder/director/president of the Foundation, he actively encourages healthy lifestyles for youth through the game of baseball. Hideki joins Derek Jeter and the entire STOPit team in their efforts to save children from bullying.

“I had a wonderful career as a professional baseball player. It is also true that sometimes I had a hard time and during those hard times warm voices from family, managers, coaches and fans helped me. Now it is time for me to support others who are having a hard time. STOPit can provide the means through which to help those suffering because of bullying. That’s why I support STOPit. We cannot forgive bullying. Be brave and please take a stand against bullying along with me,” said Hideki.

Future vision of STOPit Japan and Hideki as a supporter.

STOPit plans to deliver Hideki’s message to children through the poster above for Japanese educational organizations (schools), public relations magazines issued by Japanese districts and his video message.