Every year, the number of assaults against ambulance staff increases. In 2016/17 more than 250 physical assaults were recorded against staff from the East of England Ambulance Service NHS Trust (EEAST) – an increase of 10 per cent from the previous year.

The Trust has launched Don’t Choose to Abuse to highlight the problem of assaults on ambulance service staff and remind the public there is zero tolerance against any form of abuse against emergency workers.

Whilst this is a small proportion of the thousands of calls the ambulance service receives every day, one assault is one too many.

Robert Morton, EEAST Chief Executive, said: “Ambulance managers, staff and volunteers work hard to save lives and protect the vulnerable in our communities. It is totally unacceptable that they face violence and aggression, whether in person or over the phone, when they are trying to do their best for our patients. If someone is drunk or has taken drugs, they are still responsible for their actions. There is no excuse. Our staff should be able to do their job without fear of being attacked.” 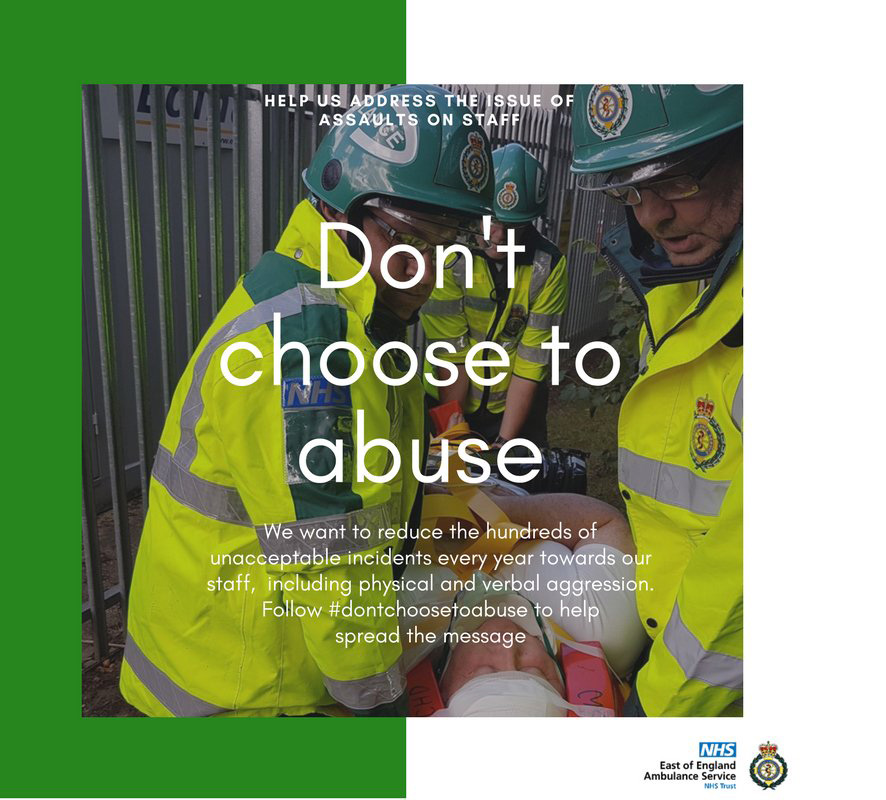 In a survey of EEAST staff, more than 10 per cent said they regularly experienced physical abuse whilst working.

Physical assaults can cause a devastating impact on ambulance staff with some requiring counselling and treatment for Post Traumatic Stress Disorder (PTSD).

Robert added: “We continue to work closely with the police to ensure that action is taken against those who assault our staff. Having seen first-hand the impact violence and aggression can have on my colleagues, I have in the past and will continue to call for much tougher sentences for people who assault ambulance staff and other emergency workers.”

More than 40 criminal sanctions have been brought against people who assaulted ambulance staff last year.

A paramedic from Norfolk, who has asked not be named, was assaulted and left with a needle stick injury earlier this year, which resulted him being off the frontline since the attack and receiving treatment to stop prevent HIV and Hepatitis. He has also been diagnosed with PTSD. His attacker was jailed for three and a half years.

The paramedic said: “We all have the right to go about our duties without fear of or being verbally and physically abused or assaulted. Sadly, this isn’t often the case, so I hope my case shows these offenders can and will be prosecuted in the future. For me right now I am on the up and getting better each day, I still have plenty of off days and suffer with terrible fatigue. I feel my confidence has suffered in regards to being outside and in crowded places but that will get better in time and with some counselling.”

Student Paramedic Gemma Brucher has worked for EEAST for four years and is based at Cheshunt, Hertfordshire. She was head-butted by a man in Hoddesdon earlier this year.

“I had bumps and bruises on my face and my nose was swollen but not broken. I returned to work about a week later and my confidence was completely ruined for a while. I was a solo responder. However, after this I have not been a solo responder and will never again. I think about it every time I go on a job and it affected my sleep for a while and I had flashbacks,” she said. 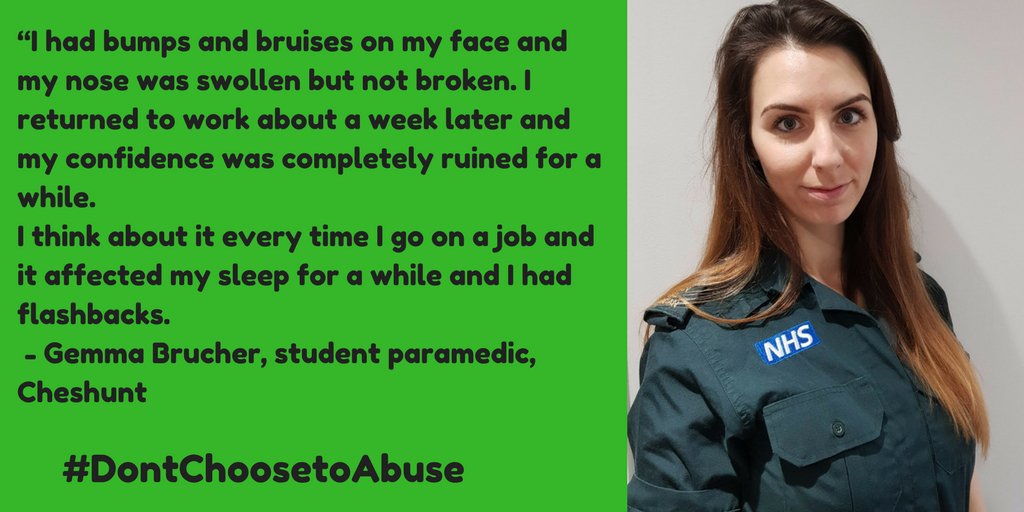 Chelmsford-based Emergency Medical Technician Ian Watkins was attacked whilst trying to help a drunk man with a head injury. His attacker was jailed for six months.

“It has definitely changed the way I approach jobs and I am wearier and on my guard, especially if I’m going to a drunk patient. There is no excuse. The more we can get prosecutions, the more the public will understand that it is unacceptable. It should be dealt with harshly,” he said.