Today, Stand Up To Cancer (SU2C), American Airlines and Marvel Studios’ Avengers: Infinity War announced a powerful collaboration as they team up in the fight against cancer. The inspiring initiative and public service announcement (PSA) features beloved Marvel Studios’ Avengers: Infinity War heroes, esteemed SU2C researchers and American Airlines team members who have personally fought cancer. To raise funds, awareness and further Stand Up To Cancer’s mission to bring groundbreaking therapies and treatments to patients as quickly as possible, this first-of-its-kind collaboration comes to life in print, radio, digital and broadcast PSAs with a powerful call-to-action and additional campaign elements to come.

“Our team members are true service super heroes and are at the forefront of everything we do at American Airlines. The team members featured in this campaign represent all American team members who are currently fighting or have fought this terrible disease, and we are humbled by their fortitude,” said Elise Eberwein, executive vice president – People & Communications for American. “This innovative campaign takes a serious issue and presents a powerful reflection of the resiliency of the human spirit. We stand proudly with the Stand Up to Cancer and Marvel Studios’ Avengers: Infinity War teams to underscore the importance of raising funds for more widely shared cancer research quickly to save lives now.” 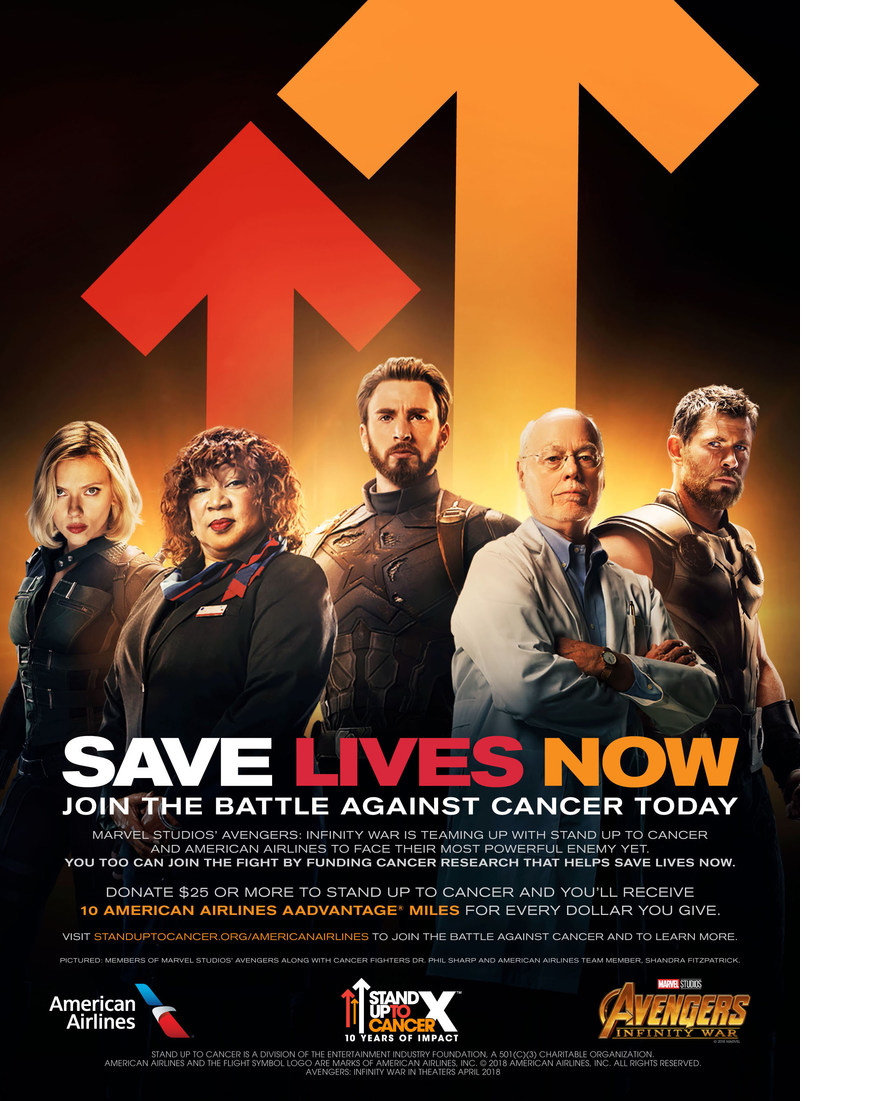 “It’s an honor to bring these worlds together,” said Mindy Hamilton, Marvel’s senior vice president of Global Partnerships & Marketing. “Our Super Heroes are often placed on pedestals as the ultimate paradigms, so we’re excited to shift the spotlight onto the real-life heroes who battle against this terrible disease every day. On behalf of the entire studio, we acknowledge their bravery, resilience, and the example they’ve set for all of us. And, most importantly, we stand with them as they continue the fight.”

“This incredible campaign represents Stand Up To Cancer’s mission to encourage collaboration across unique partners in an effort to flip the script on cancer and save lives now,” said Stand Up To Cancer co-founder Rusty Robertson. “American Airlines has been a tremendous supporter of SU2C, and we are so grateful to their courageous team members who are sharing their heroic, personal journeys in this PSA.”

“With the magic of Marvel Studios, we’re proud to bring real heroes—our SU2C scientists and the American team members—together with  fictional ones, to help save lives and enable our innovative work to soar to greater heights while empowering new audiences to join the movement,” said Stand Up To Cancer co-founder Sue Schwartz.

The PSA campaign will launch early April 2018 with more elements from American Airlines to follow later this month. This year, both Stand Up To Cancer and Marvel Studios each reach their 10-year marks. Marvel Studios’ Avengers: Infinity War will be in theaters April 27, 2018.

The PSA campaign was developed and created by LA, a creative advertising agency located in Hollywood, CA. The broadcast PSA was directed by Tamra Davis, who recently directed episodes of Star, You’re the Worst and Younger.