Barnardo’s is marking Disability History Month by sharing some 125-year-old stories of children supported by the charity. 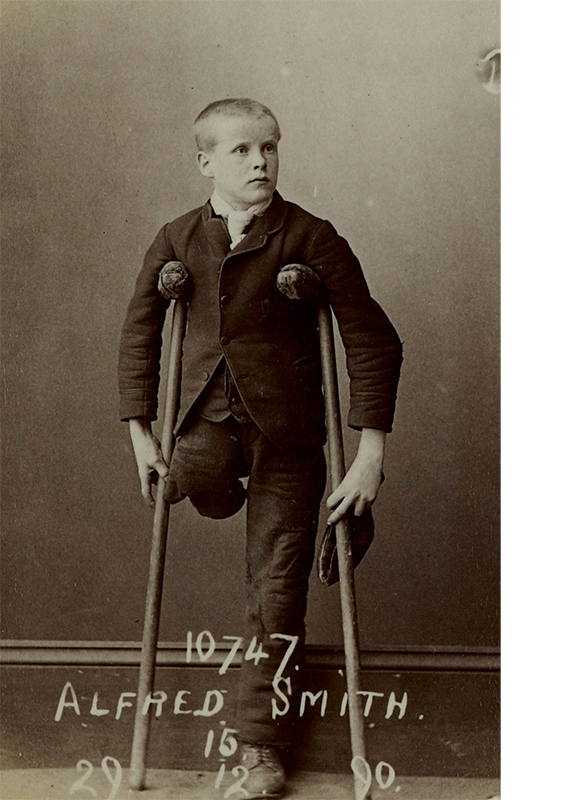 From the beginning, Barnardo welcomed all children regardless of their disability or background into his community. He wrote in 1877: “We receive cripples into our homes, not because they are cripples, but because they are destitute. Given the destitution and when accompanied by disease, deformity or ill-health… we will render assistance.”

Barnardo disapproved of a segregated life for disabled children, arguing that able-bodied and disabled children both benefitted from integration. He wrote: “Unkindness to these little unfortunates from the other boys or girls is a thing quite unknown to us. It seems as though the presence of a child maimed for life, or marked by some serious deformity draws out only kind deeds and gentle thoughts from the roughest boys and wildest girls.”

When Thomas Barnardo began his work in London’s poverty stricken East End, in 1870 one infant in every seven died in England and Wales.

Disabled children often learnt a valuable trade under Barnardo’s care. In 1872 a tailoring department was opened where boys made uniforms for the City Messenger Brigade and Barnardo’s boys resident in the homes.

In the Girls Village Home in Barkingside they were specially trained to embroider fine linen and lawn handkerchiefs. At Barnardo’s art school for deaf, blind and disabled girls in Hackney they wove Persian pile carpets, rugs, tapestry, made pram sets and hand-painted lace.

At the time of Barnardo’s death in 1905, there were 7,998 children in the care homes and approximately 1,300 of these children were described as disabled.

Barnardo’s today is committed to the principle of inclusion for disabled children and works with children from pre-school age to 16 plus. It supports young people with special educational needs and those who have been, or are at risk of being, excluded from school. It also works with young disabled people who have been denied access to normal everyday living and experiences and provides short breaks for disabled children to give them new experiences.

Alfred Collings was born November 1895 in Plymouth and admitted in January 1905 aged nine.

His father a well-known docker, and a “man of excellent character and a temperance worker”, died from pleurisy and pneumonia in July 1901. The mother received £10 insurance money.

Soon after his father’s death Alfred suffered a fall which led to the bone in his foot becoming diseased. Unfortunately for a long time after the accident the problem wasn’t identified or treated and eventually the parish doctor ordered him to the infirmary where his foot was amputated.

While in the infirmary, Alfred’s mother became acquainted with a man who, according to the Barnardo’s admissions report, “professed great affections for her” claiming he had “pecuniary prospects”.  They married in 1904. “Her illusion was quickly dispelled and six days later she drove him from the house having found him to be drunken, idle and fraudulent”.

Alfred’s mother was described as very respectable earning money as a bottle washer. Her rooms were poor, but were always tidy, as were her children.

The admission report says: “Alfred is of a specially bright, lively and mischievous disposition and has been petted and spoilt by the men in the infirmary. He was perpetually playing pranks.”

He eventually was restored to his mother in 1914 nine years in Barnardo’s care.

Herbert Harris was born in March 1874 in Ashton, Berkshire and admitted March 1892 aged 18.

Herbert’s father died from tuberculosis three months after Herbert was born but his mother remarried a porter who worked at the Millwall Dock Company.

Herbert was working at paper mills in Millwall in December 1889 when both his hands were drawn into some machinery. He was in hospital for three months and his arms needed to be amputated – one above, the other below the elbow.

The mother received £50 from the boy’s employer which was used to stock the shop that his mum and her husband ran. The admission report says that it appears that none of the money was spent on behalf of the boy, apart from buying a barrow for him on which he might sell fruit.

One of Herbert’s aunts claimed his mother and her husband brutally ill-treated Herbert, that the husband had severely beaten Herbert and his mother “equalled the step-father in cruelty”.

Herbert was described in Barnardo’s admissions report as “civil-mannered” and “in great fear of his mother and her husband”.

Herbert died in August 1896 and is buried in Tower Hamlets cemetery.

Thomas Marks was born in February 1885 in the town of Rhymney, Caerphilly and admitted October 1891 aged 15.

This tragic story saw Thomas orphaned at a young age.  Both parents were described in the records as drunkards and their deaths were as a result of their heavy drinking; Thomas’ mother died in an accident while intoxicated in 1887, four years before Thomas was admitted. His father, a former soldier and furnace man, had also died. According to Thomas’ admission history “The whole family, it appears, bear a very unwholesome local reputation”.

When Thomas was around eight, he “had both his legs cut off from the trunk by an engine running over him”.

Despite this, he is described as “a most active and powerful lad, and goes about as nimbly as the boys of the streets and there is hardly anything he cannot do. He had been caught stealing several times but had only been prosecuted once as tradesmen and others who had been his victims refrained from prosecuting him out of sympathy. He fears no man: policemen are no terror for him”.

After admission to Barnardo’s he was given an apprenticeship in the Tailoring Workshop and subsequent found employment as a tailor on leaving the homes. By 1899 he had his own business in Wales.

Kate McLoughlin was born in June 1882 in Nottingham and admitted September 1889 aged seven. The local vicar made the application.

Kate’s father had been in prison several times and was serving nine months in jail at the time Kate was admitted.

Her mother’s drinking had resulted in three of her children falling victims to accidents. Tragically, her first child drowned in a bucket of water while the mother was in a pub. Another was seriously burnt while the mother was again out drinking. Kate fell out of her mother arms in infancy, the result being hip disease and deformity.

Kate had been in Nottingham Hospital but was growing strong and at the time of her admission it was thought “with good treatment and proper care, may regain the entire use of her limbs” her only chance of this is the removal of her present miserable surroundings.”

The family of five lived in one room which the local vicar described as, “the most utter squalor and filth”. It was “the very worst home” he knew in his parish.

Kate was described in Barnardo’s admissions report as a “good-tempered, frank, willing child” who had suffered from insufficient nourishment.

After care and training in the homes she went into domestic service in 1905.

Alfred Smith was born in November 1875 in the town of Rugeley, Staffordshire and was admitted December 1890 Aged 15.

Alfred’s father died of diabetes in 1884 leaving seven children. His mother was described in the admissions report as “irreproachable for cleanliness and respectability” but was unable to work due to abscesses on her legs from which she had suffered for five years. She received parish relief of 3 shillings and three loaves of bread a week. Alfred was described as “smart and intelligent, capable of making his way” despite having his right leg amputated aged 13.

After receiving an apprenticeship in the Tailors workshop, Stepney he became a tailor in Kingston, Surrey in 1895.

William Large was admitted 26 September 1888 aged around seven and a half.

William’s mother died of tuberculosis in 1887 in Tonbridge, Kent. The father subsequently deserted William and went into the local workhouse as he was disabled and not able to do a full day’s work.  The father was described as an “excitable man, perhaps not strictly responsible for his actions having some years ago sustained injury to his head. His carelessness and cruelty to the child have caused the hip disease which the little one is afflicted”.

William was also deaf and had tuberculosis. He was also described as “bright, attractive and intelligent, quite capable of learning a trade” and “an affectionate little fellow”.

William was trained within the print school at Stepney and was able to secure employment as a printer in 1899.

Elizabeth Lines was born in August 1884 in Deptford, London and was admitted December 1892 aged eight.

Elizabeth’s father died of tuberculosis in 1887 aged 32. Her mother was employed two days a week at Morden College where the matron spoke very highly of her. The mother also worked one day a week at a private home and received some parish relief.

A fall during infancy is believed to have caused the abscesses on the knee-joint which made it necessary to amputate Elizabeth’s leg in St Thomas’ Hospital when she was just 19 months old.

She was described as “well-behaved, sharp and fond of needlework”.

The training Elizabeth undertook at the homes helped her secure work as a dressmaker in Port Talbot, Glamorganshire in 1905.

Fred came from a “wretched home” in Cheltenham. The mother died of tuberculosis. The father, a shoemaker, had six children. Fred had at least two operations on his cleft palate which were unsuccessful. He had one eye, as a result of an accident, but otherwise was “strong and hearty”.

While in the Home for Sick Children he behaved well but it came to light that he began stealing and, it was believed, at the instigation of his father or sister. The father was described as “drunken and totally unconcerned with his children”.

Fred died in May 1895 and is buried at Tower Hamlets cemetery.