The nature of depression can discourage people from talking about their illness, cutting them off from help. Yet research shows 69% of helpline callers foundthat talking to someone enabled them to cope better and feel supported, less anxious, and more in control. SANE is encouraging more people to get in touch.

The campaign features a film showing a man being silenced by an unidentified intruder who covers his mouth as he struggles to answer the phone. The intruder is a metaphor for the man’s depression, who wants to stop him talking. The film ends with the line: “Your depression doesn’t want you to talk. But we do”.

The social media campaign #LetMeTalk will see celebrities including Stephen Fry and Ruby Wax participate in a mass ‘day of silence’ on Twitter, with only thetyping icon posted that day. After 24 hours the reason for their silence is revealed. On Instagram influencers will post images of themselves with a stranger’s hand across their face. The campaign film is subsequently shared with followers.

James Arthur, a SANE Ambassador, praises the campaign: “People with depression tend to stay quiet about their condition. They shy away from sharing their struggles with colleagues, loved ones and friends yet it’s a proven fact that talking about your depression is often the way to defeat it”.

The campaign was created by advertising agency Iris, with the film shot by up-and-coming director Youness Benali through production company Sweetshop. The stills were shot by the renowned British fashion photographer Rankin. The campaign will run across digital channels and outdoor posters.

SANE was established in 1986 to improve the quality of life for people affected by mental illness. It works to raise public awareness, fund research and bring more effective treatment and compassionate care to everyone affected by mental illness. It operates the only national out-of-hours specialist mental health helpline in the UK, completely funded by voluntary donations. Mental health helplines play a crucial role in helping meet the demand for people seeking advice or support for mental health problems.

Marjorie Wallace, Founder and Chief Executive, says: “You don’t have to struggle with depression; there are medical and psychological therapies which are effective and can transform a person’s life.Many of the people who contact us are reaching out for the first time and no longer feel afraid and alone.”

Rankin says “Talking about mental health is an important step towards addressing problems, yet often it is the hardest thing for those suffering to do.I hope those in needare able to connect with these images and with this campaign,and are able to reach out for the help available to them”. 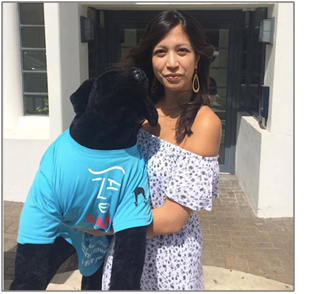 Hanna Stanbridge, 32, suffered from depression and anorexia since 2009, after much deliberation and trepidation she called SANEline to talk about her problems. The helpline volunteers provided the space and time Hanna needed to talk about her mental health, and the guidance given helped her hold hope and move forward.

“I am honoured to be supported by SANE. Back when I was at my lowest and with no one else who I trusted or felt I could be completely honest about my ‘crazy’ thoughts I called SANE. The first time, I simply cried down the phone then hung up. But SANE’s incredible staff were always there; no matter what I said and did. And always knew what to say or to just listen; whatever I needed.”

Hanna has gone on to achieve much success as an actress, and now lives in LA pursuing her career.She performed a solo comedy show at the Edinburgh Fringe poking fun at her struggle with depression, played Angel Delaney in BBC’s drama River City and won a Scottish BAFTA for her first feature film, Outcast.

“I want to make people talk openly about mental health but also realise there is help available from important organisations like SANE: no one should have to suffer alone.”