Coca-Cola Australia has come out in support of same-sex marriage ahead of Australia’s historic vote on equal marriage.  The company has started a number of initiative to showcase their support including launching hundreds of thousands of Coke cans with the famous Coca-Cola script changed to the word ‘love’ and with a rainbow heart in the ‘o’ of love. As well as creating the ‘Love’ cans, as they are known the drinks manufacxturer has also made a statement on their website stating:

“Coca-Cola believes in the power of bringing people together. Whether it was the struggle for human rights in the United States in the 1960’s to a group of young people from many nations on a hilltop in Italy in the 1971, around the world we’ve always stood up for diversity, inclusion and equality.

We proudly strive for these qualities in our own business and support these rights for all in society. Every person has the right to happiness, so we believe it’s time for a change in Australia. No matter who you are or who you love, all couples should be treated equally.

We understand that not everyone will agree with our stance and we respect people’s right to hold a different view. We hope they’ll respect our right to support our staff, their family and friends, and our customers and consumers so that all can share the simple happiness of being together.”

As well as this statement they have further showed their support by changing the LED lights on their iconic Sydney Kings Cross Billboard to a multicoloured rainbow effect. 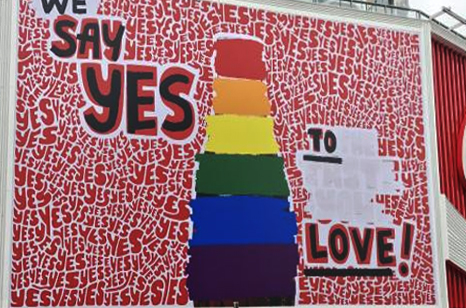