Disney has partnered with the England Women’s football team to challenge the clichés of what it means to be a modern Princess in an effort to promote and inspire girls to fulfil their potential.

The Lionesses, led by captain Steph Houghton, have channeled their inner Disney Princesses including Belle from Beauty and the Beast, Jasmine from Aladdin and Rapunzel from Tangled to show young girls that footballers can also be Princesses – with Disney redefining its Princesses with attributes such as courage, determination and kindness.

“England Lionesses and Disney Princesses share many character traits including determination, kindness and fearlessness and we hope that bringing the worlds of football and Disney Princess together will help inspire all young girls from across the country to get active, dream big and fulfil their ambitions.”

“Being brave, being strong and being kind are all important attributes when it comes to building a successful team and they are all qualities that girls can learn from Disney Princesses. We’re delighted to join the Disney Dream Big Princess campaign and hope it helps give girls the confidence to believe in themselves.”

The new campaign from Disney and The FA, shot by celebrity photographer Scarlet Page, launches ahead of this summer’s UEFA Women’s Euro 2017 in the Netherlands with the aim to get girls into football. This initiative is the first in a three-year partnership between Disney and The FA, which sets out to increase the role football has in girls’ lives by empowering them, building their self-confidence and getting them active. Earlier this year The FA revealed its new strategy for women and girls’ football, Gameplan for Growth, with the three main targets being to double participation, double the number of fans by 2020 and achieve success on the world stage by 2023.

“Dream Big Princess is such a great project to be involved with. I am a mother of a nine-year-old and it is so important to highlight that girls who are themselves, who are brave, who are caring and who are kind can be Disney Princesses too.”

England Lionesses Steph Houghton, Lucy Bronze, Ellen White, Nikita Parris and Siobhan Chamberlain are pictured sharing their advice for aspiring Princesses including BE CONFIDENT, BE DETERMINED, BE CARING, BE KIND and BE FEARLESS. They also star in a series of short films talking about the attributes they share with Disney Princesses and the barriers they have overcome to realise their dreams. 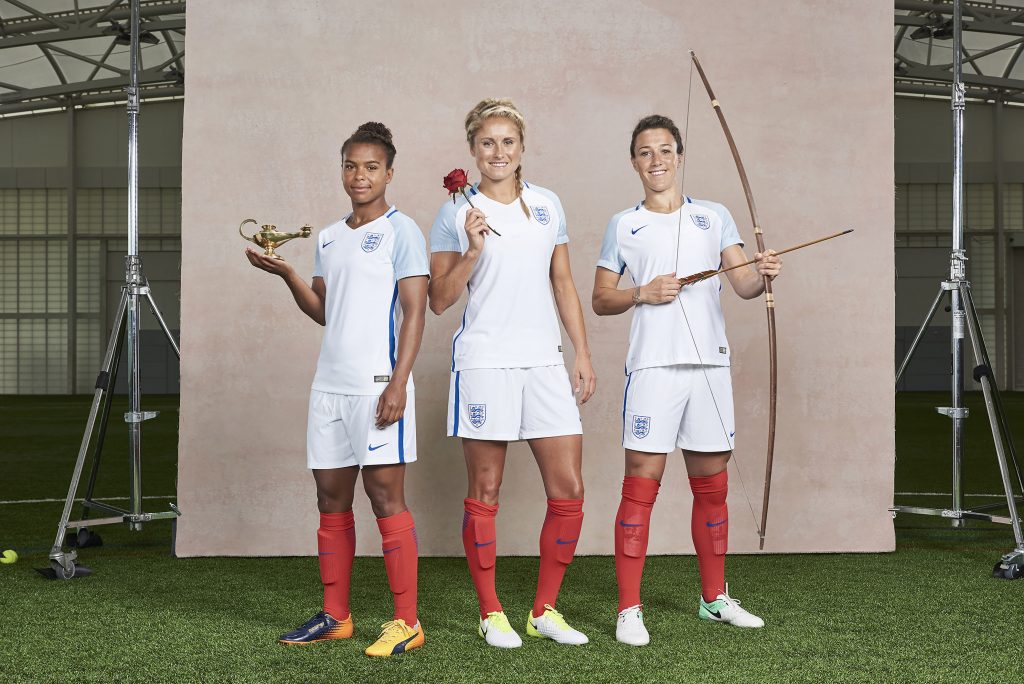 Disney Princess and the Lionesses are encouraging the public to share their own inspiring and motivating images for young girls using the hashtag #DreamBigPrincess.

“England Lionesses and Disney Princesses share many character traits including determination, kindness and fearlessness and we hope that bringing the worlds of football and Disney Princess together will help inspire all young girls from across the country to get active, dream big and fulfil their ambitions.”

“Girls’ football is one of the fastest-growing sports in the world, and particularly in England, and we take our position as role models very seriously. It is important that young girls have people they can look up to and learn from and we hope strong Disney Princesses and England Lionesses can be exactly that.”

Some more of the team gave us their thoughts on the campaign:

“My advice top young girls is never be afraid of having big dreams and ambitions. If you believe in yourself and try your very best to have fun and enjoy living them out. I loved Snow White and Pocahontas as a kid because they showed me that you could be a lovely person, but you can also be powerful and loyal and strong.”

“My favourite Disney Princess is Ariel from The Little Mermaid because she was fearless and I was the same when it came to playing football with the boys in my home town. I had to be determined in order to make it.”

“Everyone is different, but there’s a lot that can be learnt from Disney Princesses including determination and a work ethic to follow your dreams and realise your potential. I am proud to be part of a campaign that encourages girls to dream big.”