The Edinburgh Chapter of 16 Days of Activism has been doing a numbe of important events over the 16 days in the Scottish capital.

Other events which have taken place include Using art to combat gender-based violence at Edinburgh University College of Art with Naomi Smith and some of her fellow University of Edinburgh students, Katherine Dalton, Hazel Steven, Louise Mamey, Allie Haddlesey, and Gavin Gillon. Also lauunched on the 25th of November was The Abuse, That’s Not Only… (Przemoc To Nie Tylko…) intiative, this was launched at an event at Edinburgh Sheriff Court on Saturday. Polish workers and volunteers supporting victims of domestic abuse came together to raise awareness within the community about various forms of domestic abuse; the impact it has on victims, including their children and families, as well as available help in the UK. 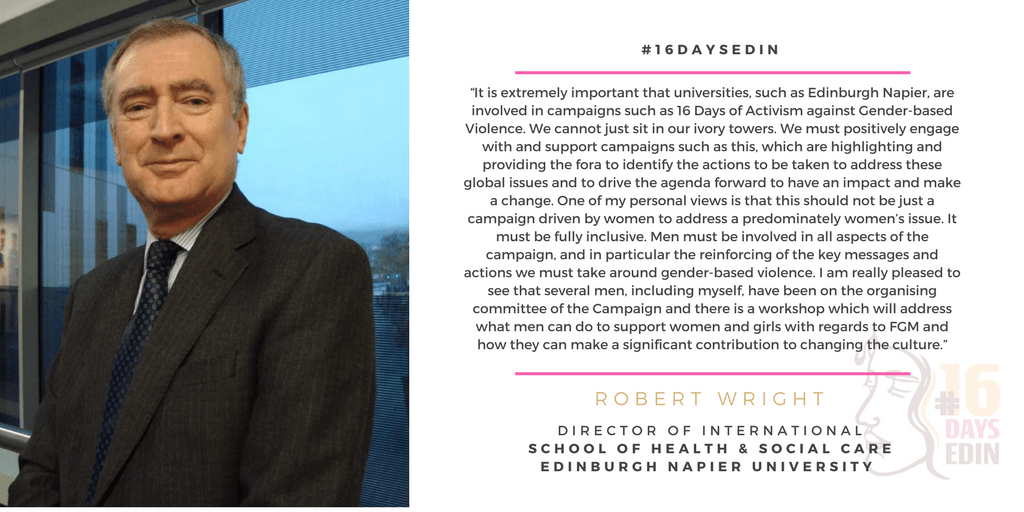 Why this is important

The Edinburgh Chapter have posted a number of blogs highlighting the importance of the 16 Days of Activism Campaign. These include one by the Bethany Christian Trust whose staff often meet women who are victims of GBV (Gender Based Violence) at their Care Shelter for people sleeping rough. Other blogs include one highlighting the plight of women in Russia, and one which discusses what GBV is and gives examples. 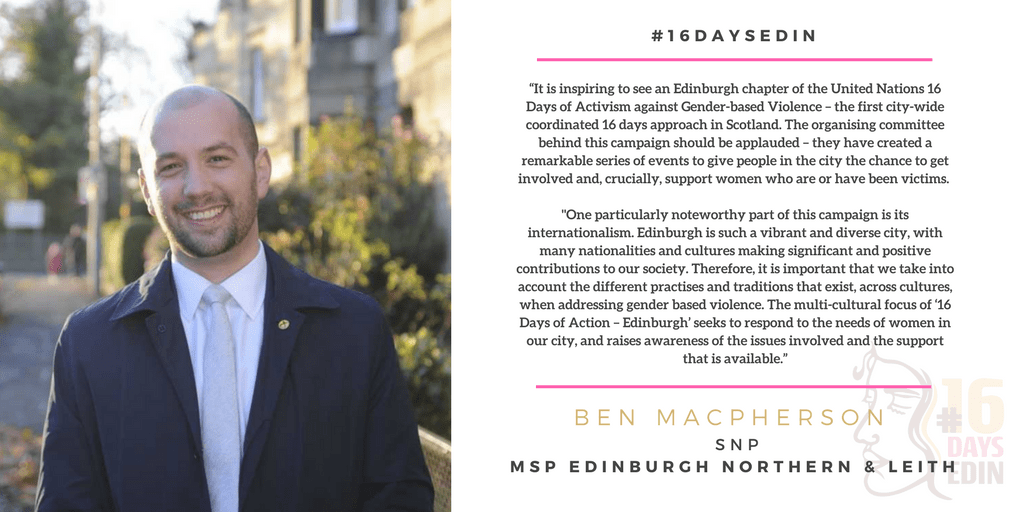 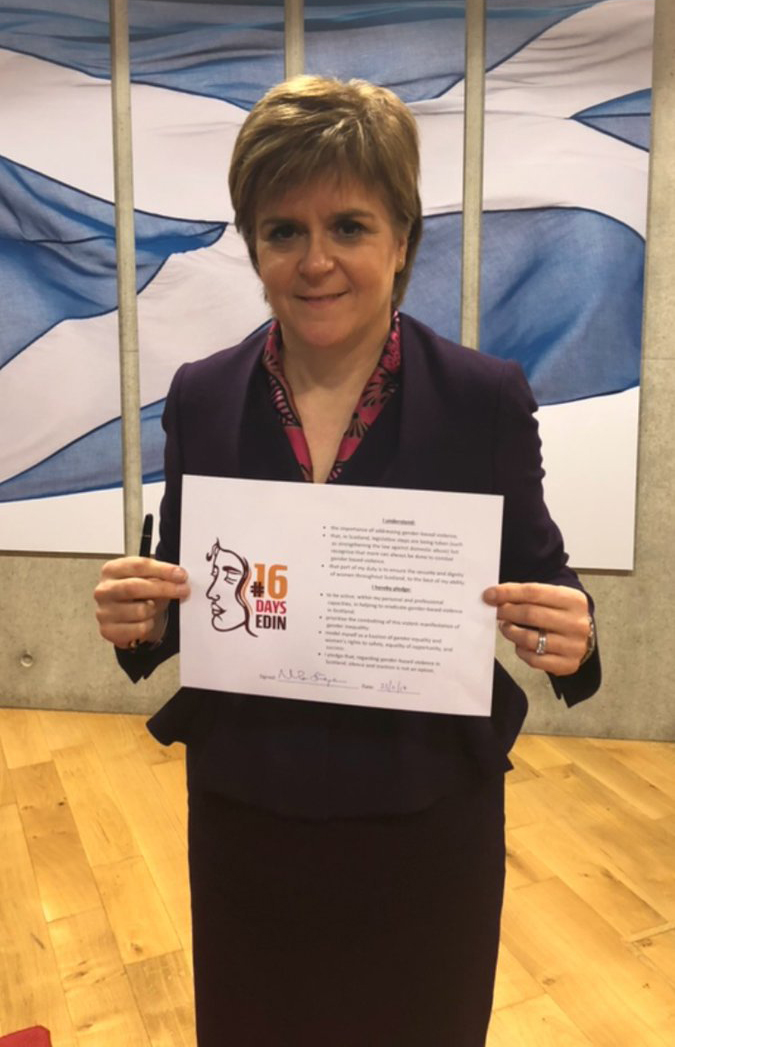 About 16 Days of Activism

The 16 Days campaign, which mobilizes governments and public alike, is commemorated by the UN under the umbrella of the Secretary-General’s campaign UNiTE to End Violence against Women by 2030. Orange has been designated as the colour of the UNiTE campaign as it symbolizes hope and a violence-free world. The call is for everyone to “Orange the World” and play their part to end violence against women and girls, taking the outcry to action. In 2016, people in a record 105 countries participated. 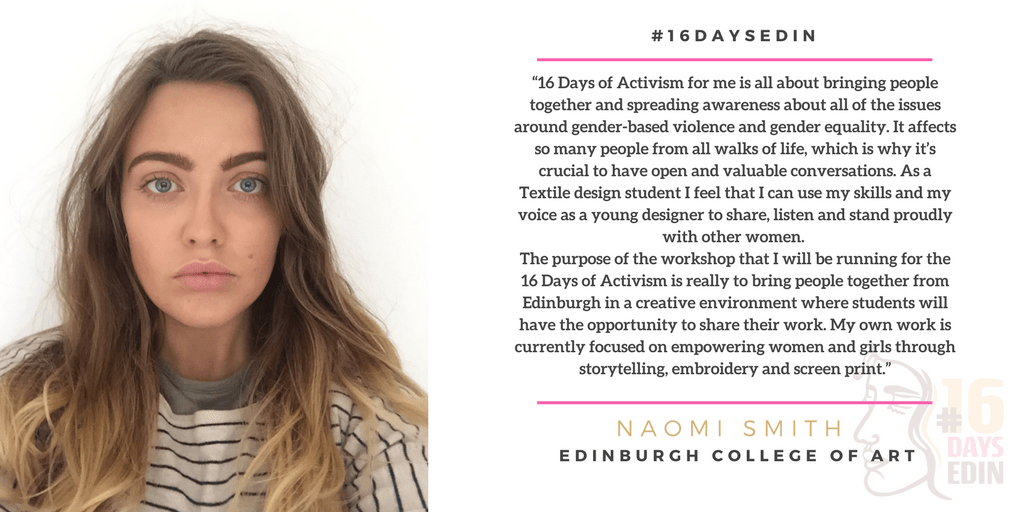 This year’s theme for the campaign is “Leave No One Behind: End Violence against Women and Girls”, in line with the 2030 Agenda for Sustainable Development. It underscores that while no group of women or girls is exempt, the risks and vulnerabilities for some are greater. Identifying the most marginalized women and girls is fundamental to being able to effectively respond and reach them.

For instance, migrants, refugees and internally displaced people are at greater risk of sexual violence and may lack formal recognition by the State, which prevents them from accessing health, police, justice or social services. Indigenous women and those from ethnic or racial minorities often face the highest levels of discrimination across social, political and economic dimensions. Women living with disabilities and those living in rural areas face physical and/or communication barriers. 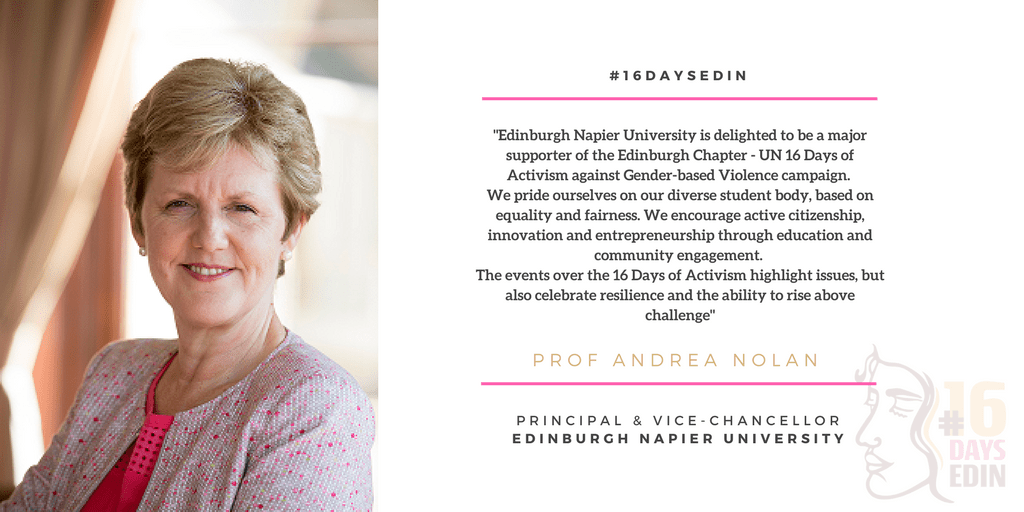 “Everyone has the right to live their life without violence or the threat of violence. This holds for all people, no matter what their gender, age, race, religion, ethnicity or caste, and irrespective of their income level, sexual orientation, HIV status, citizenship, where they live, or any other characteristic of their identity,” said UN Women Executive Director, Phumzile Mlambo-Ngcuka. “At the heart of today’s theme of ‘leaving no one behind’, is leaving no one out. This means bringing women and girls as equals into everything that concerns them,” she added. 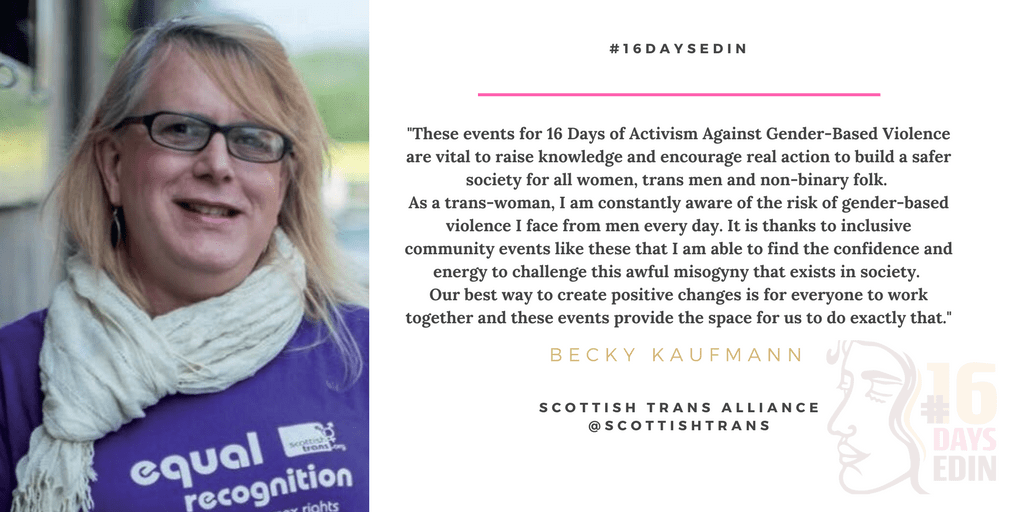 Violence not only has negative consequences for those who suffer it, but also their families, the community and society at large, and it comes at a high economic cost for society. But it is not inevitable—violence against women and girls can be ended with a comprehensive approach that includes the passing and implementation of laws to protect women and girls and boosting efforts to prosecute offenders; prevention that starts at an early age to instill a culture of zero tolerance toward violence; and comprehensive services accessible to all survivors, including medical and psychological support, housing, legal advice, etc. The multilateral UN Trust Fund to End Violence against Women, managed by UN Women, has for 20 years awarded grants to over 460 organizations with results that show that violence against women and girls can be systematically addressed.