Marketing has often been accused of exaggerating the truth. One of the tenets of ethical marketing for most ethical marketing professionals is that they will tell the truth. Ethical marketers look to be honest in their campaigns and will try to be honest and upfront with their customers. It is interesting that this week, a campaign has done almost the opposite of that. The campaign utilised fake news in what some have said is an unethical way.

The film, from director Gore Vebinski, is A Cure For Wellness. It is a thriller about a mysterious health spa, and the campaign created a series of fake local news articles for fictional newspapers such as The NY Morning Post, The Salt Lake City Guardian, The Houston Leader and  The Sacramento Dispatch. These articles used headlines such as ” Screenings for Upcoming Psychological Thriller Result in Panic Attacks” to promote the film. Other fake headlines seem to have little or no connections to the film such as  “Bombshell: Trump and Putin Spotted At Swiss Resort Prior To Election.” 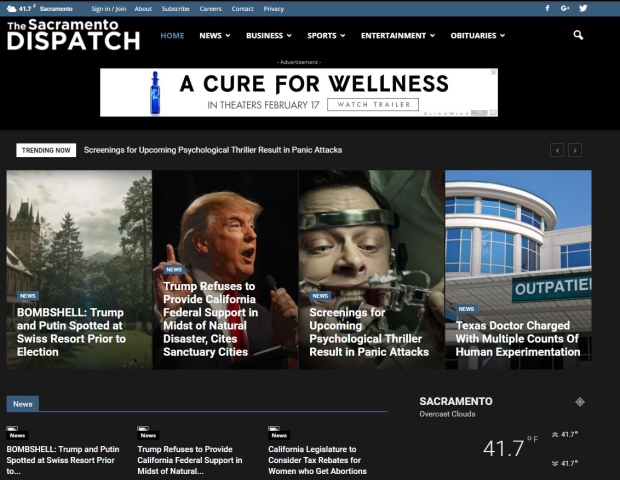 An archived version of the website for The Sacramento Dispatch (Archive.org)

Buzzfeed talks about one story which mentions how Lady Gaga’s Super Bowl halftime show would include a tribute to Muslims generated more than 50,000 shares, reactions, and comments on Facebook. It is not known whether those sharing them realised this was part of the campaign or believed them to be genuine. As well as the ethical issues of using fake news in this way it is quite likely marketing of this sort might backfire if people think they have been fooled.

Buzzfeed also highlight another ethical problem with these ads, which is people were confusing them with real publications. The fake site HoustonLeader.com was mistaken for The Leader, a weekly newspaper in Houston. The Leader subsequently receieved a lot of complaints.

In the end, 20th Century Fox was forced to admit that this unethical marketing strategy was wrong. A statement from the studio said:

“In raising awareness for our films, we do our best to push the boundaries of traditional marketing in order to creatively express our message to consumers. In this case, we got it wrong,”

The websites have been taken down, and now redirect to the official website for A Cure for Wellness.