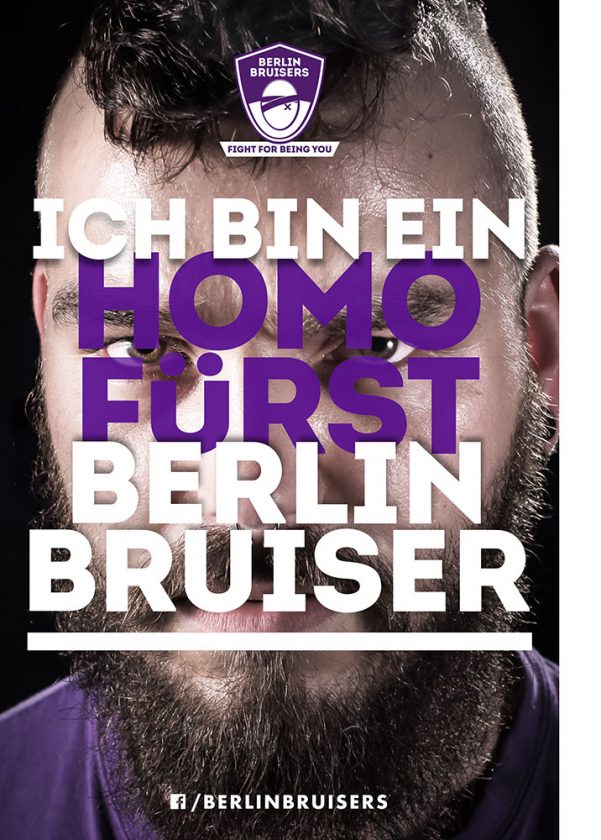 To kick off Pride Season, Germany’s first gay and inclusive rugby team, the Berlin Bruisers are releasing a powerful and provocative campaign promoting respect and tolerance.

For the face-to-face offensive, team members bravely stood in front of the camera to tell their own personal stories of exclusion, bullying and stereotyping. “While in other sports homosexual players have to hide in the changing room. The Berlin Bruisers are positioning themselves against prejudice and homophobia with their slogan “Fight for being you“, says Adam Wide, co-founder of the team.

The goal of this Germany-wide offensive – which will be communicated via social media and guerrilla campaigns in Berlin – is to increase the visibility of the LGBTQI community, portray diversity and challenge prejudices. The club wants to continue to its growth and is looking for professional and leisure rugby players who share the same attitudes.

This is the first step in campaign that is to be further expanded. It was developed and will be implemented by the Berlin creative agency ZumgoldenenHirschen. “Of course we support the Berlin Bruisers in their mission. Let’s be honest: Diversity is still an issue in our industry and there is a lot of room for improvement!“, explains Felix Franz Vogler, Managing Director of ZumgoldenenHirschen Berlin.

To kick off the Pride Season, the Bruisers were present at Motzstraßenfest with a booth to recruit new players for their club. More information on the face-to-face offensive can be found on the Bruisers Facebook channel.

The Berlin Bruisers are the first gay and inclusive rugby club in Germany. Since its founding in 2012, the club is part of one of the fastest growing sports in this country and will fighting in the upcoming season 2018/2019 in the Regionalliga Nordost for promotion to the 2nd Rugby Bundesliga. The Gents XVare the men’s team that encompasses all male recreational players and is open to everyone. In addition to the team training there is an open training on Sundays every weekat the park at Gleisdreieck, to which anyone can come to have a little rugby taster! The members of the Berlin Bruisers are gay and hetero, big and small, fat and thin, male and female and come from over 20 nations. A colourful team of over 50 active members. The love for the sport has brought them together. They actively use that to work together for diversity, inclusion and equal treatment. At the same time, they want to overcome injustice and stereotypes – especially those to which LGBTQI* people are exposed to on a daily basis. With this message the team visits schools in Berlin, plays rugby with the students and shows them in workshops how a diverse society works.