The UK’s 5p levy on plastic bags is proving popular with the general public with a majority saying funds raised should go to charity, according to new research from the Charities Aid Foundation (CAF).

The mandatory levy was introduced across the UK as a whole in 2015, for plastic bags from large retailers such as supermarkets. CAF research found that nearly eight in ten (77%) of those surveyed said the levy was a positive step to protect the environment.

The survey also found that shoppers are adopting new habits since the levy’s introduction, with almost eight in ten people (78%) saying they now reuse plastic bags more often and less than one in five (17%) saying they resent having to pay for their shopping bags. 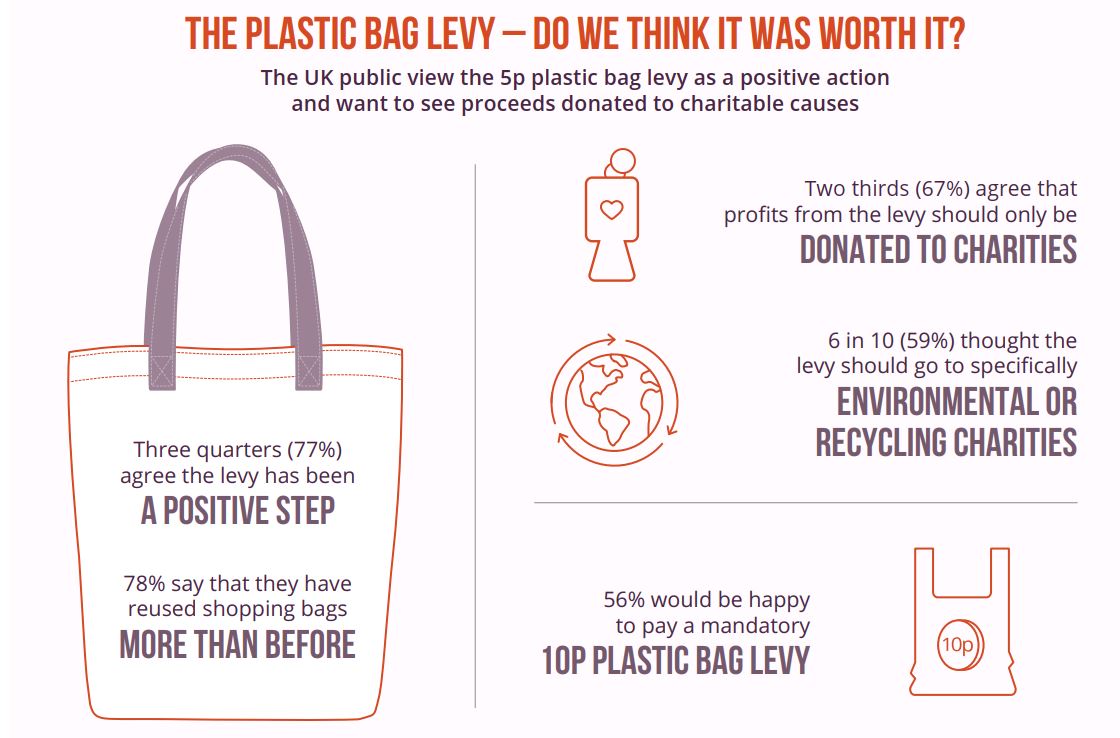 Even fewer people, just one in eight (12%), said the levy had been an inconvenience to shoppers.

While they are not legally required to donate levy proceeds to a good cause, retailers have so far donated the majority of monies raised – or £167 million – to charity.

CAF has worked with four major retailers to distribute nearly £43 million of that levy money to charitable causes since the scheme was first brought in.

Klara Kozlov, Head of Corporate Clients at CAF said that although the levy is having a profound impact on reducing single-use plastics, there are some retailers who have not fully seized the potential that this money can bring to charities.

“Whilst the big supermarkets we work with – Co-op, Aldi, M&S and Sainsbury’s – have all donated the vast majority of plastic bag levies to a variety of great causes, there is still awareness to be raised and work to do to make sure more of this money finds its way from retailers to charities which are making such a difference in our communities.”

CAF’s research found that nearly seven in ten of us (67%) agree that profits from the levy should go to charities. Over half of those asked (54%) said they would be more likely to shop at a supermarket if they knew the shop donated the levy proceeds to charity and six in ten (59%) singled out environmental or recycling charities as where the levy should be directed.

The plastic reduction efforts of retailers large and small are increasingly in the spotlight from “supermarket rebels” such as HISBE, an ethical supermarket based in Brighton with a focus on waste reduction to the likes of Waitrose, which has launched a plastic-free packing trial at an Oxford store.

CAF’s Kozlov said big retailers can make the most of the public’s enthusiasm.

“We know that shoppers are not just in favour of the levy, they are very keen for the money generated to be put to good use, especially when focused on environmental issues.

“With Extinction Rebellion protests on the streets and the school strikes for the climate movement continuing to engage a new generation, consumers are more and more inclined to spend their money with retailers that share their values.”