Ocean plastic pollution is one of the biggest global environmental threats of our age. It’s time to take a stand against throwaway plastic culture that is feeding the rise of Wasteland, a new ‘super-power’ threatening the world.

There is a new ‘continent’ in the Pacific, a continent so vast and impenetrable that no explorer has yet fully mapped it. It’s called Wasteland. It has its allies grouping in the North Atlantic and other oceans gyres.

Wasteland was not forged by a shift in tectonic plates, but simply, by us – it is a continent made entirely of plastic… throwaway plastic.

Five times the size of the UK, Wasteland is growing and threatens to destroy us and our planet, yet it is a ‘country’ not many know about.

Surfers Against Sewage has produced a powerful campaign film with Oscar-nominated actress Imelda Staunton providing a chilling voice-over across footage and animations, showing the emergence of the fictional super power, Wasteland. Whilst this is a creative interpretation, the reality is no less stark for all of our oceans.

To highlight the scale of the threat, Surfers Against Sewage commissioned the installation of Wasteland Warship, a curation of thousands of plastic collected from beaches around the UK into a gigantic warship. Infiltrating Marazion’s iconic beach in Cornwall, the 30ft structure has been installed to represent the nation’s greatest threat to environmental security – single-use plastic. 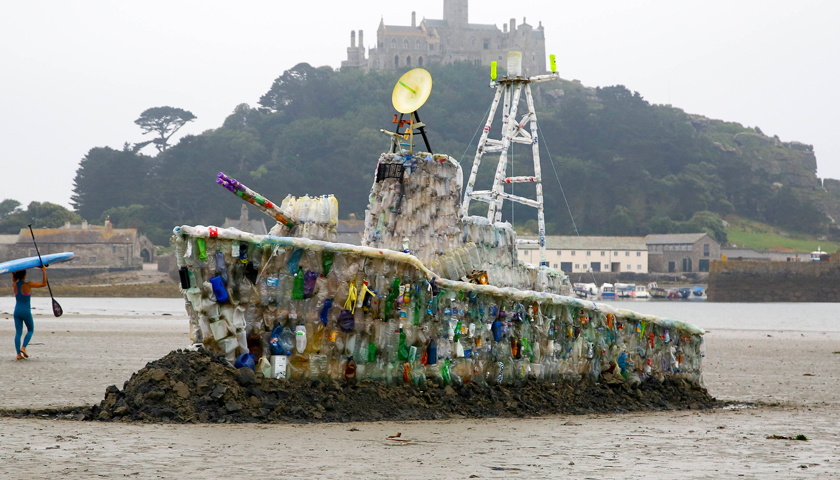 Hugo Tagholm, CEO of Surfers Against Sewage says: “In a remote area in the North Pacific lies one of the most catastrophic man-made disasters to have ever affected us. Five times the size of the UK, Wasteland is growing and threatens to destroy us and our planet, yet it is a ‘country’ not many know about. Our Wasteland Warship is designed to highlight this, helping to spread the message about what is one of the greatest environmental threats of our time, plastic pollution.”

“There are easy steps we can all take join the resistance against the flow of plastic feeding Wasteland. Whether that’s refusing throwaway plastics wherever we can, taking refillable water bottles with you instead of buying single-use bottled water, reusing plastic bags on your weekly shop at the supermarket or making sure you recycle more, we all have our role to play.”

A new SAS study also looked at the plastic consumption habits of over 2000 people across the UK reveals that one in four (24 per cent) are unaware that not all plastics are recyclable, with the average person throwing away 23kg of single-use plastic every year, equivalent to the weight of 1352 plastic bottles, 4600 plastic forks or a seven-year-old child.

The findings also show that a third of Brits (35 per cent) throw away more than three or more plastic bottles on a weekly basis, despite them being either refillable or recyclable.

Single-use plastics, those that are designed to be used only once then thrown away, are playing a detrimental role in the conservation of coastlines and marine ecosystems. According to a recent study by the UN, plastics contribute an estimated 60 to 80 per cent of all marine litter, causing devastation for marine habitats. Nanoparticles from plastic waste are creating vast whirlpools of plastic sludge killing plankton, contaminating the food chain, and resulting in harmful chemicals making their way into supermarket food.

In a bid to reduce the quantities of plastic entering our oceans, SAS is calling for the public to join the resistance against Wasteland – the name given to this growing mass of marine plastic – and resist the use of single-use plastics.

SAS, which mobilises 25,000 beach clean volunteers annually around the UK, has revealed the most common single-use plastics that are found on UK beaches, with plastic bottles, coffee cups and plastic cutlery topping the list.

Most common single-use plastics found on our beaches:

Those interested in joining the resistance against Wasteland to reduce their plastic footprint and help create plastic free coastlines can find out more information here: www.plasticfree.org.uk