To help support brave firefighters like those depicted in the film Only the Brave, Sony Pictures Home Entertainment (SPHE) is teaming with the social change platform Pixhug™ to raise up to $100K for the Granite Mountain Fund, an organization that drives donations to support firefighters. Pixhug and their sponsor, TheBayFestival.org, kicked off the nationwide initiative with a $50K donation. In an effort to double the donation, fans are invited to turn their “likes” into money to support firefighters. Fans can like Jeff Bridges’ Facebook post to help! 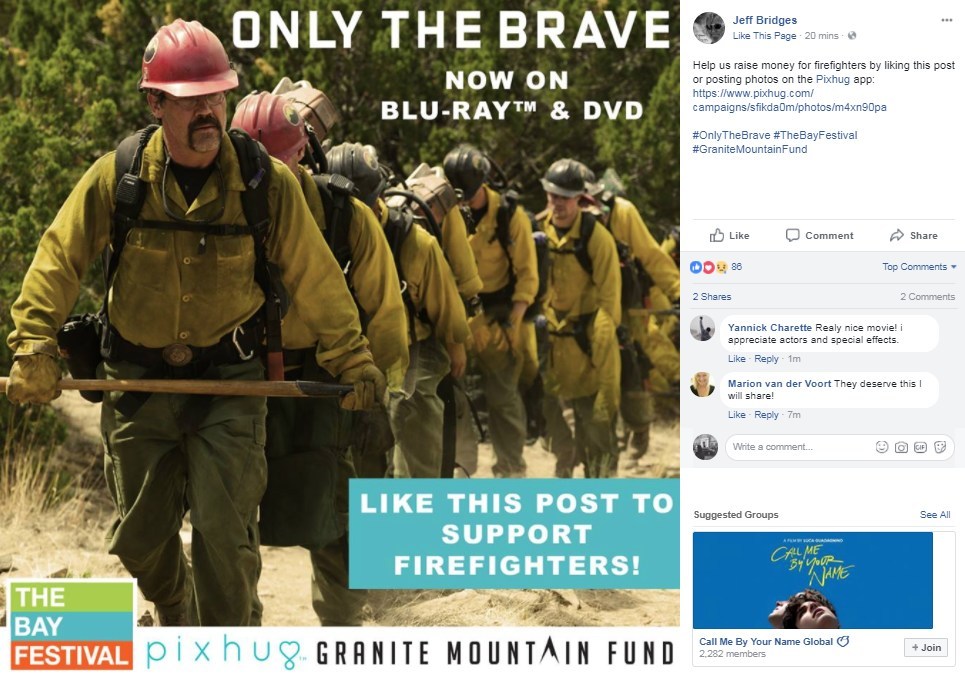 “With the inspiring and heroic effort to battle recent horrific wildfires and mudslides in California, we are thankful for organizations such as the Granite Mountain Fund that offer support for firefighters, first responders, and their families,” says Hans Koch, Executive Producer of TheBayFestival.org. “Only the Brave is an emotionally captivating film that speaks to the dangers of the brave firefighters the Granite Mountain Fund hopes to support with this important social campaign.”

Pixhug is a social change platform that connects social media with social responsibility by uniting people with causes and the companies that support them. The app turns “likes” into donations, giving everyone the power to make a difference simply by sharing and liking photos and videos. With every photo posted to the Pixhug™ social platform users can then choose a charitable campaign to donate all their likes to, such as the Granite Mountain Fund. Every like is worth 10 cents, and the money is donated by TheBayFestival.org.

“We have reached an exciting point in time where a powerful story, like the one told in Only the Brave, not only depicts a real-life event but, through Pixhug, allows its audience to engage with and support the cause alongside the stars of the movie,”  says Mido DeSanti, Founder, CEO of PixHug.

To use the Pixhug app to support the Granite Mountain Fund:

Based on the true American story of the Granite Mountain Hotshots that gave their lives to protect their community, ONLY THE BRAVE is an intense tale of brotherhood, sacrifice and inspiration. ONLY THE BRAVE was shot and mastered in 4K and debuts on digital and 4K digital with HDR* January 23 and on Blu-ray™ and DVD February 6 from Sony Pictures Home Entertainment.  Certified “Fresh” on Rotten Tomatoes, the acclaimed ensemble cast includes Academy Award® nominee Josh Brolin (Best Supporting Actor, Milk, 2008), Miles Teller (Whiplash), Academy Award winner Jeff Bridges (Best Actor, Crazy Heart, 2009), James Badge Dale (The Departed), with Taylor Kitsch (“Friday Night Lights”) and Academy Award winner Jennifer Connelly (Best Supporting Actress, A Beautiful Mind, 2001). The Blu-ray and DVD also include digital versions of the movie, redeemable via the all-new Movies Anywhere App.