Tesco will be ‘Bursting with Pride’ this weekend as it supports London Pride with stores across London joining in the annual LGBT festival.

Thirteen Tesco stores along the parade route will also add a splash of colour to the iconic Tesco chevrons with the rainbow colours of Pride to show their support.  Regent Street Metro will also have Pride themed window vinyl’s, rainbow coloured flooring and shelving and even display the Pride colours at the checkouts.

Tesco returns as an official sponsor of London Pride this year which expects to see over 300 groups march in the famous parade, and over one million people attending. A specially adapted 40-foot Tesco delivery truck will take part in the parade on Saturday 8th July. Decked out with a Pride-o-Meter, dance floor and coloured smoke canons, the truck will play music selected by DJs from Gaydio, the world’s biggest LGBT radio station. 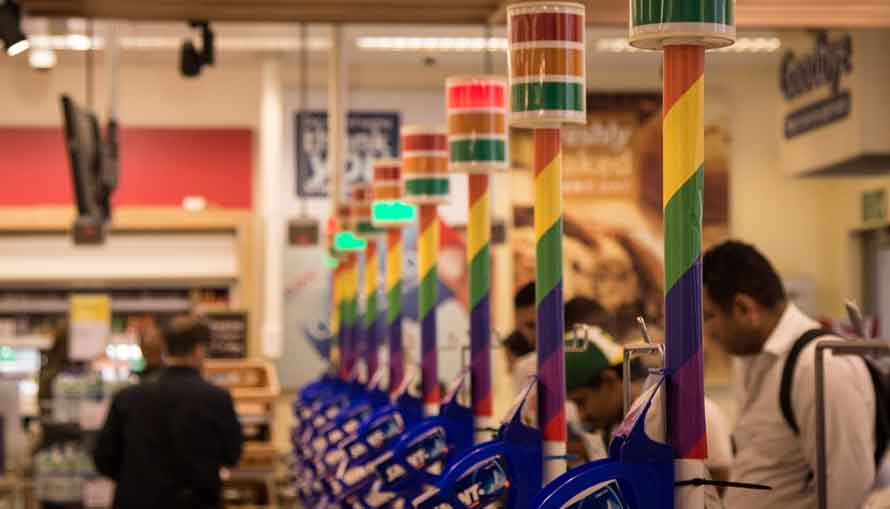 In addition, Tesco stores across London will be fundraising for the LGBT charity, Diversity Role Models, which works to prevent homophobic and transphobic bullying in UK schools. Stores along the parade route will also sell exclusive F+F Pride t-shirts with proceeds being donated to the charity.

“Pride in London is such a fun and vibrant event and that’s why we’re proud to be an official sponsor again this year. Over 300 of our colleagues are expected to take part in the parade and thirteen stores along the route will enter into the Pride spirit with special Pride-themed signs, bunting and carrier bags.”

A team of 650 volunteers will help make the event run smoothly and Tesco will provide each volunteer with lunch to keep them going on the day. The retailer will also hand out bottles of water, sweets and flags to attendees.