Absolut has created a powerful poster campaign to highlight  the fact that it is still illegal to engage in same-sex activity in 72 countries worldwide  as part of its campaign for a more inclusive and open world. Launched on the 50th  anniversary of the amendment of the Sexual Offences Act – the Act of Parliament that saw homosexuality decriminalised in England and Wales – the poster series features individuals  from many of those 72 countries sharing a same-sex kiss to celebrate their own freedom of expression.

Shot by celebrated photographer Sam Bradley, ‘Kiss With Pride’ reflects Absolut’s belief that  people   should  be  free  to  love  who  they  choose  and  builds  on  the  brand’s progressive views and ongoing mission of championing  equal love. The images capture intimate  moments  that would  not be tolerated  in those individuals’  homelands,  with many of the nations represented regarding  homosexual activity as a crime punishable by death. 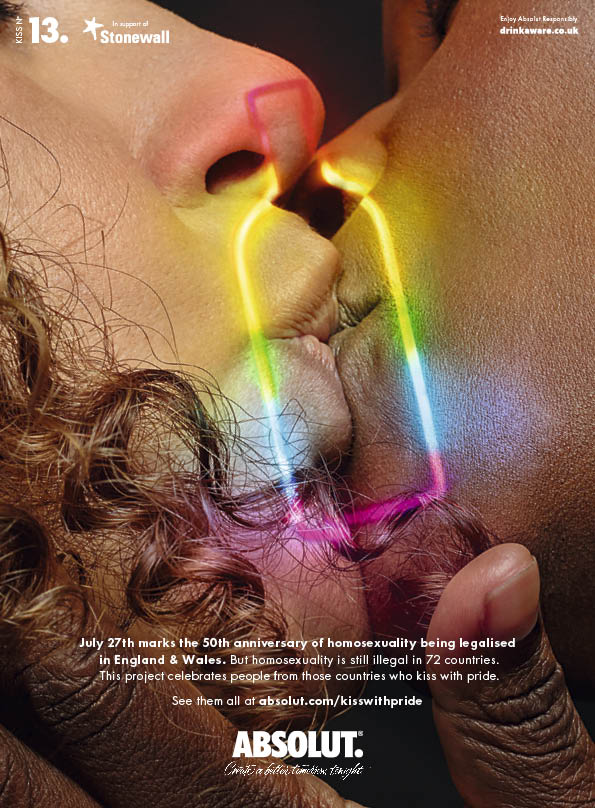 “I was drawn to the Kiss With Pride campaign because the idea was so pure. I knew I had to be involved,  it’s quite  rare for advertising  to be for a cause without  it feeling disingenuous.  This felt absolutely  natural  and  true”,  says Sam Bradley.  “The  more people that see these images the better. And not just in progressive cities like London and New York. I would really like the images to reach people outside of that bubble and to start a constructive conversation.”

The  ’Kiss With  Pride’  images  were  exhibited   at  a launch  event  at  the  Houses of Parliament, which saw passionate speeches from  a number  of LGBTQ activisits. The assembled guests were encouraged  to celebrate the work done so far in progressing attitudes in the UK, but also reminded of the work still to be done worldwide.

Sam Bradley’s images for ‘Kiss With Pride’ will be rolled  out as part of a nationwide poster and digital  OOH campaign, and displayed along the route at Brighton  & Hove Pride. In addition, ’Kiss With Pride’ will appear as print  ads across national news and consumer lifestyle magazines.

From the 4th  until  6th  August  the images will also be displayed  to the public  as one collection at East London’s Protein Gallery (31 New Inn Yard, Shoreditch, London EC2A 3EY). 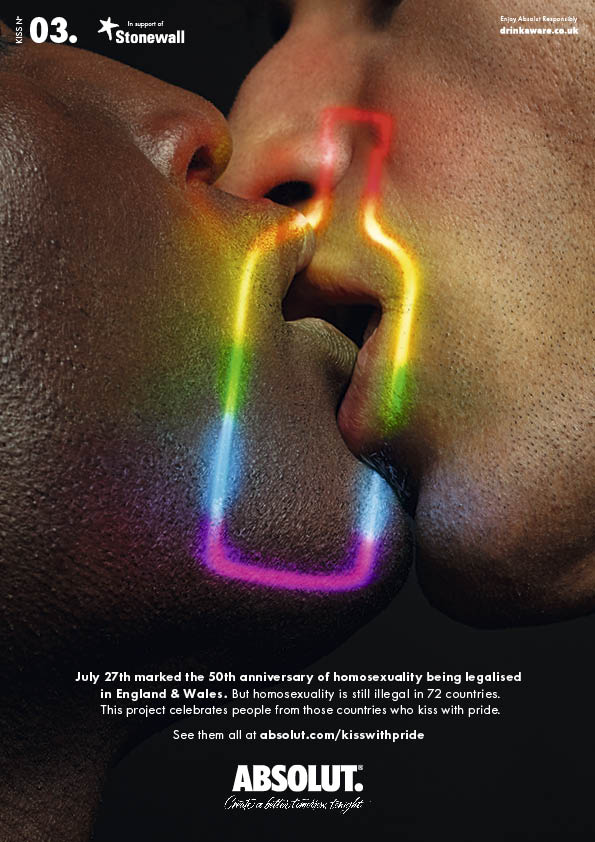 As part of the wider campaign  Absolut  has also launched a #KissWithPride Snapchat Lens, which will see £1 donated  to Stonewall for every use*. Absolut has reserved the lens during Brighton Pride, where the Snapcode will feature on along the parade route and  in  select  bars and  restaurants. The Snapcode  will  be  available  nationwide  all summer.

The launch of ‘Kiss With Pride’ sits within Absolut’s recently launched ‘Create A Better Tomorrow, Tonight’ platform,  designed to celebrate the brand’s core beliefs and its continued collaborative  approach.

“As  a  brand  we  have  a  long  history  of  working  collaboratively   with  the  LGTBQ community,  so the 50th  anniversary of the Sexual Offences Act was a moment  in time that we were keen to celebrate. The fact that millions of people  around the world still aren’t free to love who they choose goes against everything Absolut stands for, so the Kiss With Pride campaign  is something we’re extremely proud  of”, says Adam Boita, Pernod Ricard UK’s Head of Marketing. 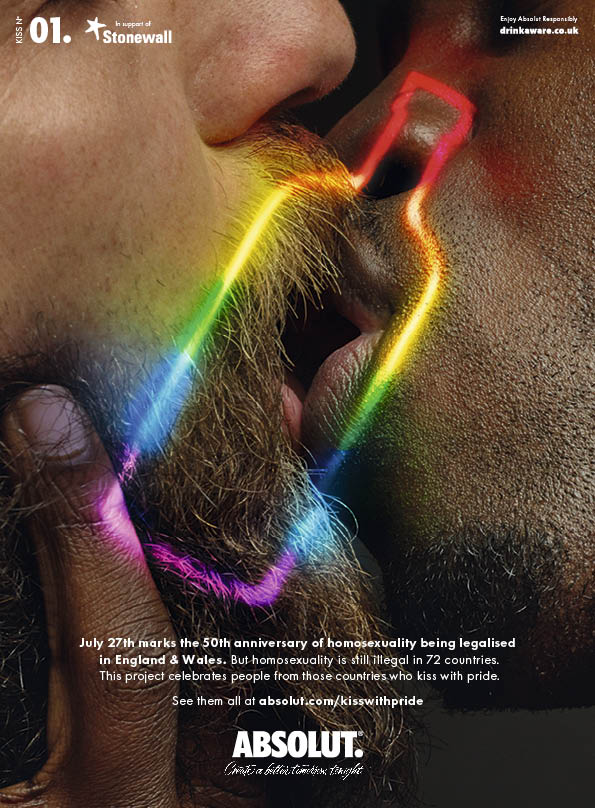 Ian Heartfield,  ECD of BBH London,  commented:  “This is the second campaign  in a matter of weeks that we have made with Absolut that’s been designed to help change minds in a positive, constructive, celebratory  way.  We look forward to making many more.”

Ruth Hunt,  Chief  Executive, Stonewall,  said: “Consensual  same-sex activity  remains illegal in 72 countries, and is punishable by death in eight. These figures serve as a stark reminder that we must not be complacent about what’s left to do until all LGBTQ people are accepted without exception.”

The  ‘Kiss With  Pride’  campaign  follows  on  from  the  recent  release  of  Absolut’s beautifully  shot ‘Equal Love’ film,  a similarly powerful  statement  that  used a never- ending and diverse kiss as a metaphor  for acceptance and love without  discrimination. Watch the film at: YouTube.com/Absolut.