Afro textured hair is about to take centre stage like never before in 7 cities in the UK under the Project Embrace #afrovisibility billboard campaign initiative. 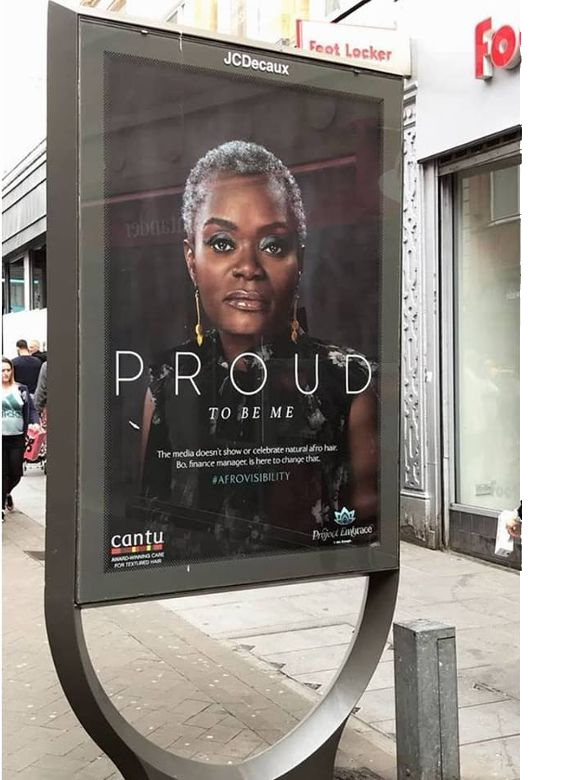 A teacher, a finance manager, a writer, a receptionist, a student and an HR partner, all selected from over 400 women through an open audition, are featured on a series of posters by Quiet Storm.

Lekia Lée the founder of Project Embrace has been on a mission to change the narrative around beautiful hair and by extension beauty one billboard at a time ever since her daughter at the age of 3, now 12, only complimented black women with straight hair.

She hopes to make beauty representation in the media more inclusive and diverse by celebrating and promoting different Afro textured hair.

Lée said: “Representation is very important but unfortunately it has been dangerously one-sided. At Project Embrace we want to create a much more needed and beneficial balance, so that black women and girls can feel empowered because when you feel empowered, you can achieve anything. This is how we want black women and girls – and anyone else with curly hair – to feel after seeing our billboards. We want to inspire them to feel confident in the skin they are in and the hair that that they wear.”

Trevor Robinson OBE, Founder and ECD of Quiet Storm, said: “This feels like a really positive step forward in a very complicated subject. Lack of black representation in the media and how that effects our kids – my own being a perfect example – is obviously an issue close to me. When there is nobody out there similar to you it’s hard to feel good about yourself, and we can’t underestimate the effect this has. We’re extremely proud of this campaign but we feel there is still a very long journey to embark on. It was great collaborating with Project Embrace and Vine Creatives on this project and I hope we can expand this campaign further in the future.”

The campaign has been made possible by donation of billboards from Nottingham City Council and Clear Channel.

A Nottingham City Council spokesman said: “We were very happy to support the positive messages of Project Embrace’s campaign by making a number of our city centre poster sites available to them. They are in prominent positions and will be seen by thousands of people over the week they are in place.”