“Children are precious. Yet as a society we are failing them. No child in Ireland should experience poverty, neglect or not have a home.This work is about getting people to stop and think about these issues and support Barnardos in changing these children’s lives.” That’s according to Laurence O’Byrne, Creative Director at award winning Dublin creative agency Boys and Girls  describing their new campaign for Barnardos, the children’s charity that transform children’s lives through their services; support parents; and challenge society where it fails children. 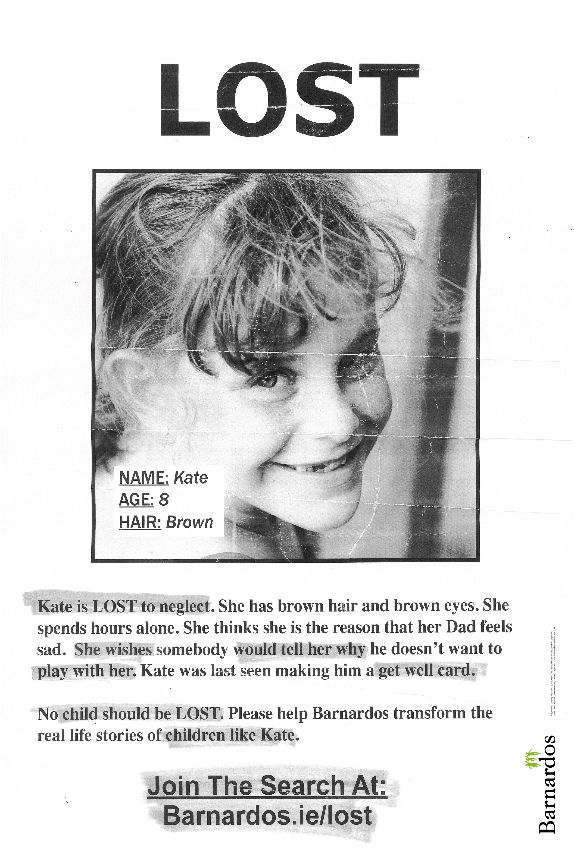 The campaign launches Barnardos new organisation platform and goes live on 21st February 2018. It shines a light on the injustices that children in Ireland face everyday and that result in childhoods being lost – lost to Child Homelessness, Child Poverty and Child Neglect. A call to action in the advertising calls on people to take notice, take responsibility and“Join the search at Barnardos.ie/Lost.”

The campaign includes an immersive360 degreefilm that puts you in control of searching for a lost child, a 60 second TV commercial and a suite of 24 Lost posters for Outdoorand Social. The central idea behind the work is that there is nothing more terrifying than a child being lost. Even just for a moment. But in Ireland, Barnardos calculates that One in Seven children are being lost every day to issues like homelessness, poverty and neglect. And we as a society are not doing enough to help find them.

Barnardos CEO Fergus Finlay said: “For too long children have not been a priority politically, and childhood itself has not been valued as it should be – as the most important time of a person’s life. Thanks to a generous legacy gift, Barnardos was in a position to engage an agencyto work with us to create a campaign to grab people’s attention and make people stop and think.  Boys and Girls have been fantastic partners during this process, in both their ambition to create a strong campaign and in their drive to deliver powerful assets that will not only grab the attention of the audience, but deliver real change”.

“Everything we do is about creating great work that works.”, said Chris Upton, Business Director and co-founder at Boys and Girls, “And we are very grateful for this opportunity to partner with Barnardosto raise awareness of their great work, andmost importantly to help bring about the changes needed so that all children in Ireland are valued.”

To replicate the experience and emotional journey of losing a child, Boys and Girls used the latest 360 technology to create a 2 minute film that makes the viewer part of a search for a missing child through their mobile or desktop.

Beginning in an everyday situation of a mother in a busy train stationgetting tickets, she turns around to find that her child “Ciara” is no longer beside her and is lost.

The viewer has the ability to look all around the train station to help Ciara’s mother on her heart-stopping search before she’s finally re-united with her daughter.

The film then pauses to alert the viewer that “Ciara” wasn’t the only child lost. By looking around the station again,the viewer realises that there were three other children who were also lost. But although Ciara’s mum found her, there is no one to find these children unless Barnardos has your help. The children shown are actors, however the individual stories are based on real life cases where children have been lost to homelessness, poverty and neglect.

This tells the samestory as the 360 film and the viewer is brought through the tense search within the busy train station. In this format, we discover the three other lost children through a dramatic pause moment when they are framed within posters with theheadline of LOST and featuring their fictionalnames, pictures but real-life stories.

Boys and Girls has adopted a radical approach to Outdoor. Creating what they have described as a visual STOP sign, they stripped posters of their typical design and polish to create a style that looks torn, weather-beaten and abandoned. What’s left are 24 real stories of children as young as one and as old as sixteen. These posters will run across all outdoor formats and illustrate 24 case studies of children helped by Barnardos (but not showing their real identities, photo’s or names in the posters).

Rory Hamilton, Executive Creative Director and co-founder at Boys and Girls said:“Barnardos do important work, but people don’t always take notice. With this campaign we wanted to force them to – by using technology to put them in the shoes of a parent who has lost a child. Making them act, and then showing them all the children lost to poverty, homelessness and neglect. We are really proud of this campaign because like Barnardos, we believe that no child should be lost.”