The winds of change continue to blow across the world’s most influential food companies as more and more recognise the need to take farm animal welfare seriously.  Over the last couple of years, driven by consumer demand, investor considerations and market forces, commitments on cage-free eggs have spread from the US, to Europe and the UK, crossing all sectors and laying the foundations for the end of the cage age, while progress has also been made on the living conditions of broiler chickens. 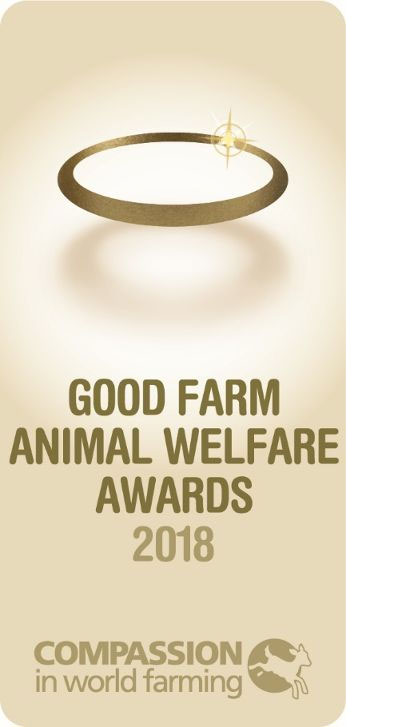 Alex said: “As a former vegetarian (now flexitarian!) – and having hosted many conferences on the subject, I’m convinced we are at a turning point in the general public’s attitude towards animal welfare. I’m delighted to be hosting this year’s ceremony and to have the opportunity to celebrate those companies that are doing so much, in very practical ways, to advance a cause which is, above all – simply humane. I truly believe their work is invaluable.”

This year there was a total of 59 awards celebrating market-leading food businesses for their higher welfare policies and practices which are estimated to positively impact the lives of over 209 million animals each year.

Winterbotham Darby has been working with Compassion for a number of years to promote higher welfare practices in the pig sector across Europe. They have developed a unique tiered animal welfare certification scheme for their continental meat suppliers (which recently received UKAS accreditation – ISO: 17065) which is driving welfare improvements and helping to secure cage-free commitments across their European supply chain. Their huge investment and commitment has been fundamental in continuing to raise the bar for pig welfare and has already shown promising results, particularly in countries like Italy and Spain – not known for their higher welfare credentials – where their suppliers are leading the way on free-farrowing systems in their countries.

Dutch manufacturer Kipster deserves a special mention for winning not only a Good Egg Award but the Best Marketing Award too.  Both accolades were awarded for having developed the ‘world’s first carbon neutral egg’. Their innovative farm has been designed to address animal welfare as well as sustainability concerns, all whilst delivering an affordable product to consumers. Through their various marketing activities and their strong partnership with Lidl, their products have been selling out in-store as consumers support the notion of buying not only animal friendly but sustainable products too.

Oliver Wegloop, Managing Partner at Kipster explained the thinking behind their work: “We want to show the world that animal welfare is definitely a realistic option in combination with environmental friendliness as well as financial feasibility. To this end, we developed a new system where sustainability and animal care do not compete. We have the highest ranking (3 stars) regarding animal friendliness from Dierenbescherming, the Dutch animal protection association. Our eggs are carbon neutral, we reduced fine particle emissions to almost zero and we have no land use for feed, because we feed our birds with a diet made from leftovers.”

The Best Innovation Award went to Germany’s SELEGGT for their work in helping to address the issue of killing male chicks in the egg industry – a practice which affects over 5 billion chicks every year.  SELEGGT has developed an endocrinological method for identifying the sex of hatching eggs before the embryo develops the capacity to feel pain. The male (and unfertilised) eggs can be humanely rejected early on and turned into high-quality feed.

SELEGGT Managing Director, Dr Ludger Breloh explains the impact they hope to make: “The scientific work to develop a solution for the issue of male chick culling has been ten years in the making but we have now developed a prototype adaptable to very large and very small hatcheries and plan to be working in a commercial hatchery in 2019.”

In recent years, Compassion has been working in partnership with the International Cooperation Committee of Animal Welfare (ICCAW) in China, developing an awards programme to recognise the higher welfare achievements of Chinese pig and poultry producers. The awards are based on criteria that equate to stars with five being the highest accolade.  This year there were 17 Good Pig Production Award winners (with one five star winner), five Good Egg Production Award winners (of which three achieved five stars) and seven Good Chicken Production Winners, again with three achieving 5 stars.  In total, this year’s Chinese Award winners are set to benefit over 180 million farm animals every year.

Dr Tracey Jones, Director of Food Business at Compassion in World Farming concludes: “There has undoubtedly been a sea-change in attitudes to farm animal welfare within the last decade. Driven by consumer demand, investor considerations and market forces, more and more companies are making the move towards to cage-free production and taking steps to tangibly improve the lives of millions of farm animals across the globe.

We encourage companies to invest in the best and develop systems that are not only fit for purpose to deliver a good quality of life, but are fit for the future too, by meeting the growing demand for more ethical and sustainable food. I’d like to congratulate all this year’s winners and look forward to continuing to help them fulfil their higher welfare commitments and pledges. It’s great to see industry leaders across the globe pushing the boundaries and really driving change.”