ILOSTAT data show that progress is needed in many areas and in every region to achieve gender equality in the labour market.

The analysis, which looks at pay, participation in management and opportunities for young women, highlights the challenges we face on International Parity at Work Day, which aims to champion the value of diversity and raise awareness of persistent workplace inequality.

While most of us are aware that women are often paid less than men in the same occupation, ILOSTAT data show where the gaps are largest. The median gender wage gap for 115 countries with available data is 14% in favor of men. And male-dominated occupations have even higher wage premiums for men. For example, 73% of managers and 77% of craft and trade workers are men according to ILO estimates, and these are the two occupational groups where men enjoy the largest wage premiums. 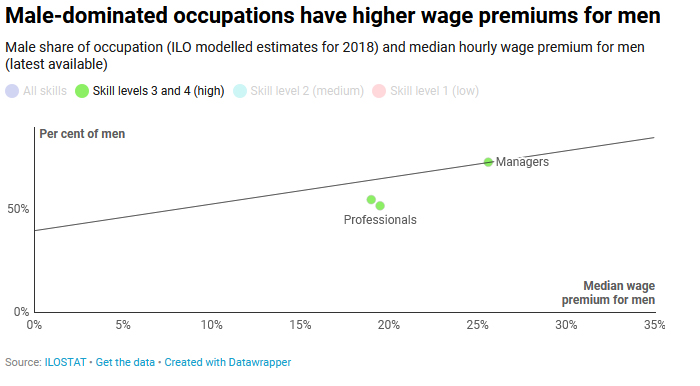 Around the world there are far fewer women than men in management, and progress in this area since the turn of the century has been virtually non-existent.

Women make up 39% of the world’s employed according to ILO estimates, but only 27% of managerial workers and that share of female managers has hardly changed in two decades.

In 2018, the share of female managers was highest in Latin America and the Caribbean at 39%, and in Northern America and Europe at around 37%. Western Asia and Northern Africa had the lowest shares at only 12%.

While there has been much debate about closing gender gaps and improving the environment for current and future generations, this has yet to be borne out in the data. Young women around the world are routinely left behind.

Women aged between 15 and 24 years old are more likely to be unemployed than men in the same age bracket, with large differences in some parts of the world. In the Arab States, the unemployment rate for young women has been about twice that of young men throughout the last decade.

There’s also a much higher inactivity rate for young women than for young men across regions, and more young women than young men are not in employment, education or training (NEET), particularly in rural areas. Globally, the youth NEET rate was 30% for women compared to 13% for men, according to ILO estimates for 2018.

In some countries this gap in labour market participation is due to restrictive gender and cultural norms, which leave women more constrained in terms of their options to seek paid employment, according to the ILO’s Trends for Women report.

These figures provide a snapshot of how far women still have to go before achieving equality in the labour market, particularly young women.

International Parity at Work Day is now in its third year, after beginning in 2017, a sign that these issues are gaining prominence. Nevertheless, the statistics should give policy makers food for thought by showing how women around the world continue to face barriers in the labour market throughout their working lives.