Girlguiding is launching its first ever national campaign to recruit more volunteers to join the leading charity for girls and young women in the UK.

Girlguiding volunteers inspire and empower girls and young women across the UK, giving their time so girls can have adventures, make friends, build confidence and develop skills they will use throughout their lives, but 70,000 girls are missing out on these opportunities because of a shortage of volunteers.

Today, Girlguiding is launching a multi-channel campaign calling on more people to volunteer and join the movement of girls and women empowering each other. The campaign features a film which will be shared on social media channels and celebrates how Girlguiding volunteers have found ‘their place’ motivating, inspiring and leading girls.

Sally Illsley, Deputy Chief Guide, said: “The spirit of the campaign is to turn the old fashioned idea that a woman should know her place on its head and reclaim it to make clear that a woman’s place is wherever she wants it to be. If you’re someone who would like to help inspire and empower a generation of girls and young women to find their place in the world then volunteering with Girlguiding is the chance to do just that.” 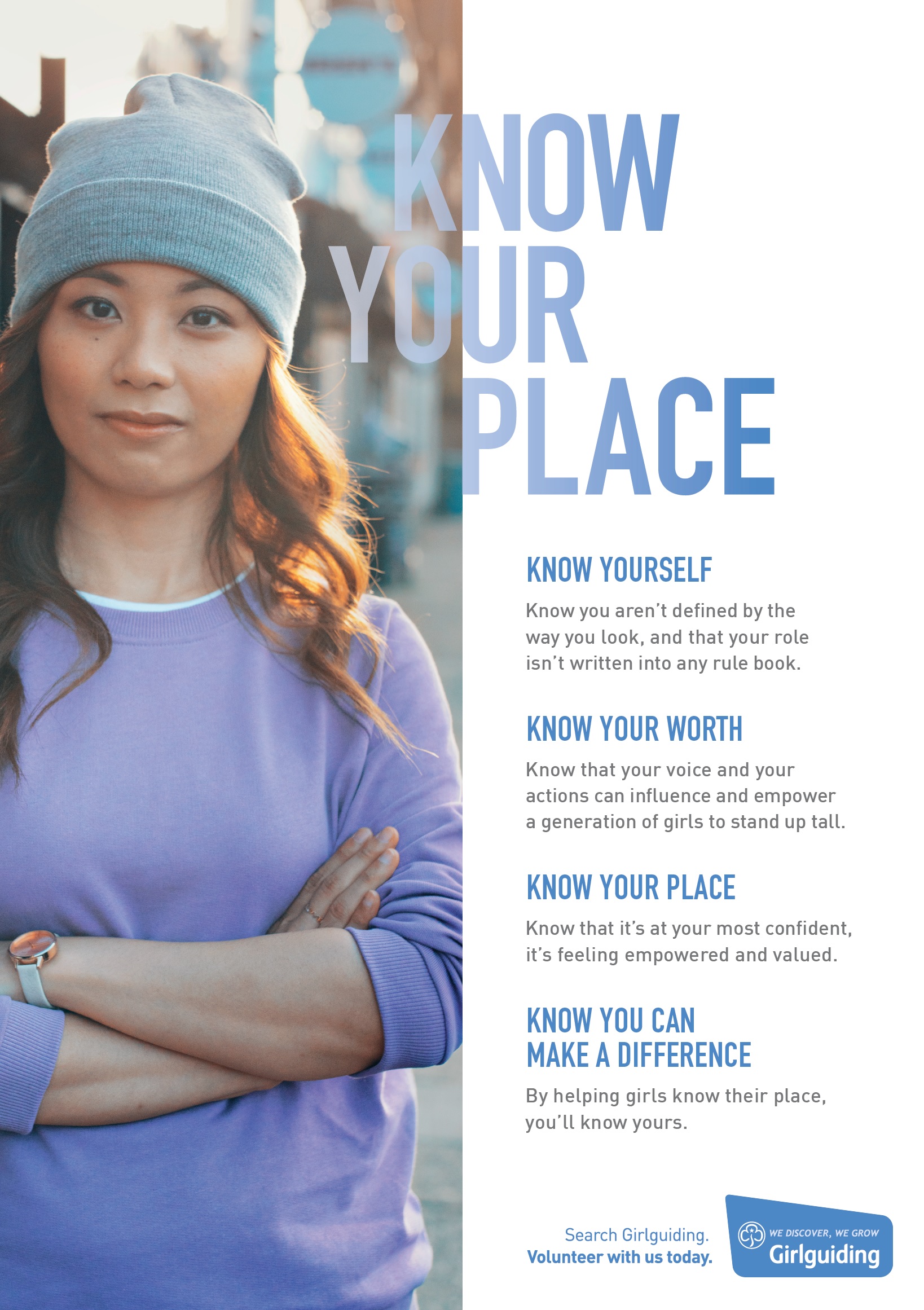 In Girlguiding, girls can access a space away from school where they can escape the pressures in their lives and are supported by volunteers to gain skills and confidence, whether they are trying abseiling for the first time, having a go at science experiments or taking action on the issues that matter to them. Without volunteers Girlguiding would not be able to provide girls and young women with these amazing opportunities.

Hayley Scott, a Rainbow and Brownie leader from Basingstoke, said: “Making children smile and seeing them achieve new things is the best thing about volunteering. Seeing the look on a child’s face when they accomplish something for the first time is amazing, whether it’s their first public reading or even the first time they’ve managed to do a roly poly. I love knowing I’ve influenced someone in a positive way and helped them to gain new skills.”

Gemma Rolls-Bentley, a volunteer at Guide groups in London who features in the campaign, said: “Some of the issues Girlguiding chooses to tackle around gender equality, professional opportunities and relationships and sex education are really important issues and I think a lot of women like myself, women in their 20s and 30s, are really struggling to understand how they can have an impact and how they can make a change and make a difference and Girlguiding really offers a way to do that.”

Jess Sinnott, a leader from Burnham-on-Sea who features in the campaign film, said: “I enjoy helping others and being part of the Girlguiding community. It’s helped me to become a well-rounded and confident person and I try my hand at anything. Girlguiding is important to girls because it gives them a safe space away from school and home life so they can completely relax and be themselves.”

Over the last nine years Girlguiding’s Girls’ Attitudes Survey has given an insight into girls’ lives and shone a light on the challenges and pressures they encounter. The 2017 survey reveals their worries about being online, the impact of gender stereotypes on their behaviour and the impact of sexual harassment at school, while in 2016 girls told us they feel as though they’re not good enough.

Maddie, a Girlguiding Advocate who is also a volunteer, said: “Girlguiding is a place where girls and young women feel free to be who they are, where they can just let go and have fun. Being part of such an amazing group of volunteers is an unforgettable experience and something I am so proud of because we are making a change. We are helping girls to reach their potential.”

Girlguiding offers a variety of flexible volunteering roles so people can find something that fits with the time they have to give, from helping out at a meeting once a month, to going along to support at weekend events or running occasional sessions with different groups.

Being a Girlguiding volunteer can take you around the world accompanying girls on trips of a lifetime, it can take you out on a weekday evening to spend an hour or two helping girls learn a new skill and it can take you on an action packed outdoors adventure weekend.

To find out more and to view the #KnowYourPlace campaign film visit: girlguiding.org.uk/knowyourplace