Every year on 25 November, UNESCO marks the International Day for the Elimination of Violence Against Women. This day was first commemorated in 1999 following a proclamation from the UN General Assembly. As 25 November fell on a Sunday this year, a series of activities were organized at UNESCO Headquarters in Paris starting on Friday 23 November. 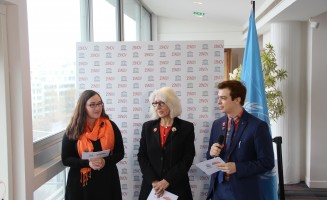 The first of these activities was a Facebook Live interview with the Director for Gender Equality, Ms Saniye Gülser Corat. During this interview, Ms Corat spoke of the history of this day, its importance to UNESCO, and UNESCO’s ongoing work to end violence against women, both online and offline.

Directly after the interview, around 150 UNESCO staff, both men and women, participated in a group photo to say NO to violence against women. This photo symbolizes the solidarity and commitment of UNESCO staff in eliminating the worldwide phenomenon of violence against women. Field Offices also shared photos expressing solidarity for this commitment. These photos may be viewed here (link is external).

Around 150 UNESCO staff members under an umbrella to say NO TO VIOLENCE AGAINST WOMEN (as above).

As 25 November has been designated as the Orange Day by the UNiTE to End Violence against Women Campaign (link is external), the UNESCO globe was illuminated in orange on Friday 23 November.

On Monday 26 November, a special session of Gender Views within the framework  of the International Day for the Elimination of Violence against Women took place at UNESCO Headquarters. Ms Nathalie Tomasini and Ms Janine Bonaggiunta, two lawyers who established an international network to protect victims of conjugal violence in France and Canada, gave a talk on their work. H.E. Mr José Antonio Rodriguez, Ambassador of the Dominican Republic to UNESCO, opened the session with an acoustic performance of one of his original songs, Ella solo dijo no, which talks about gender disparities and says no to discrimination.  The short film “Je t’aime à la folie”, produced in 2016, was also screened in the presence of the film director Mr Gilbert Glogowski. More information can be found here.

If you want to know more about UNESCO’s action on preventing Violence against Women, please visit: https://en.unesco.org/commemorations/eliminationofviolenceagainstwomenday