On the doorstep of a decisive decade for climate change, Kimberly-Clark has announced expanded new targets for greenhouse gas (GHG) emissions, approved by the Science Based Targets initiative (SBTi) and aligned with the goals of the Paris Climate Agreement. 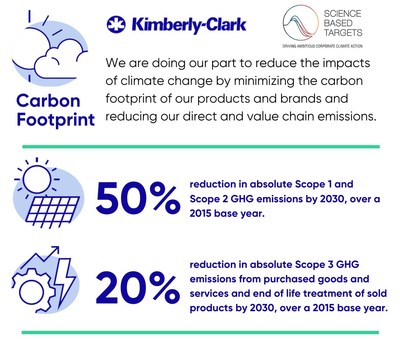 Kimberly-Clark’s ambitions for 2030 include a commitment to reduce the carbon footprint of its operations and supply chain for its trusted brands, including Huggies®, Kleenex®, Cottonelle®, Scott®, Kotex® and Depend® by 50 percent for absolute Scope 1 and Scope 2 GHG emissions (direct and indirect) from its operations. The commitment also includes a 20 percent reduction in absolute Scope 3 GHG emissions from purchased goods and services and end of life treatment of sold products. Both targets are based on a new 2015 base year.

Targets are considered “science-based” if they align with what is necessary to limit global warming to well-below 2°C above pre-industrial levels and pursue efforts to limit warming to 1.5°C, according to the latest climate science.

Alberto Carrillo Pineda, Director of Science Based Targets at CDP, one of the Science Based Targets initiative partners, said: “We congratulate Kimberly-Clark on setting emissions reduction targets in line with what science says is needed to meet the Paris Agreement. Companies have a vital role to play in driving down global emissions and it is encouraging to see major players taking such ambitious action across their operations and supply chain.”

The Science Based Targets initiative was formed by CDP, the United Nations Global Compact, World Resources Institute (WRI) and the World Wide Fund for Nature (WWF) to empower companies to set GHG reduction targets that are in line with the Paris Climate Agreement.

“The new 2030 goals will challenge us to innovate new solutions to meet these ambitious science-based emissions reduction targets and expand our focus beyond our manufacturing sites into our entire supply chain,” said Juan Marin, Global Energy Solutions Manager, Kimberly-Clark. “Our teams around the world have developed outstanding plans for conservation, renewable energy and alternative energy that have driven our results thus far. We’re excited to take the next step.”

Kimberly-Clark previously doubled its 2022 GHG reduction target from 20 percent to 40 percent after meeting its initial 2022 goal four years ahead of schedule. In 2019, the company achieved a 34.7 percent reduction in Scope 1 and Scope 2 emissions over a 2005 baseline.

In keeping with the science-based climate commitments announced today, Kimberly-Clark is working to establish a baseline of its forest carbon footprint by measuring the biogenic carbon impacts of the company’s fiber mix across virgin wood fiber, recycled fiber and sustainable alternative non-wood fibers.  Once established, this baseline will enable forest land use emissions to be integrated into future Scope 3 GHG emissions reduction objectives.

“We cannot fully address climate change without also addressing how we think about, use and account for forests,” said David Chaffin, Responsible Materials Sourcing Program Leader, Kimberly-Clark. “Our ongoing efforts to reduce our use of natural forest fiber from high-carbon value forests and increase our use of environmentally preferred fibers such as plantation-grown wood, alternative non-wood and recycled fibers will continue to be important levers for lowering our forest carbon footprint.”

Kimberly-Clark will release the remainder of its 2030 ambitions, and the company’s 2019 Global Sustainability Report, in early July.