In a week when everyone is sitting up and taking notice of the plastic problem within our seas, UK-based charity Marine Conservation Society (MCS) has launched its latest environmental campaign – Would You Care More If It Was You? – through independent creative agency, daughter. 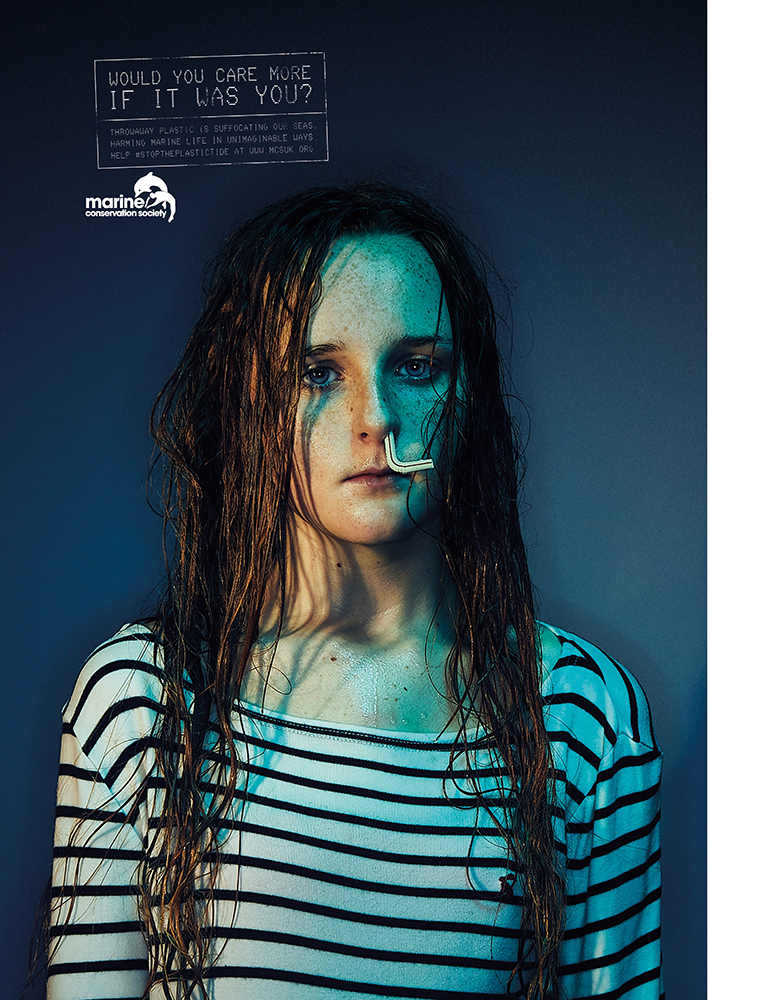 The campaign, part of Marine’s #STOPthePlasticTide project, reveals the truth behind what our plastic is really doing to life in our seas by showing the same impact on humans.

The work was created by daughter who commissioned award-winning photographer Guy Farrow to create a series of hard-hitting imagery that will feature across press and social channels.

We spoke to daughter who told us:

“UK-based charity Marine Conservation Society (MCS) has been a close client of ours since daughter was founded by Rich Newell, Stuart Jackson, Gareth Hopkins and Lee Jackson just over a year ago. As an agency, we’re always keen to do our bit, especially when the future of the planet relies on it! We’ve created a number of environmental campaigns for MCS, from helping them to reduce the number of wet wipes being flushed down toilets, to encouraging people to get to know their Poos & Don’ts.

Our latest work Would You Care More if it Was You? aims to raise awareness of single use plastic and the impact it is having on our seas and marine life. The idea was simply to show the devastation a little closer to home. Consumers don’t always get to see where their plastic ends up, but recent high-profile documentaries like the BBC’s Blue Planet 2, and viral films online of turtles having plastic removed from their noses have helped to highlight the raw reality of our actions. So much so, British Prime Minister Theresa May has announced a new 25-year plan to reduce plastic waster.

The concept was created by daughter and shot by commercial photographer Guy Farrow. The nature of the project meant everyone including agency, photographer and retoucher was happy to reduce their rates in return to get the message out there. Even the models all gave their time for free (including Guy’s daughter!). Since the campaign started, media company Ocean Outdoor has joined forces with MCS as part of a three-year partnership, offering the charity 14 high-profile poster sites across four UK cities: London, Birmingham, Manchester and Bristol to showcase the campaign.

It’s our belief that more and more partnerships like this need to happen, not only to raise awareness of the issues, but to show solidarity in the fight to Stop The Plastic Tide. Creative agencies, charities and media companies have a genuine opportunity to make a real difference when they work together. This campaign is testament to that.”