Bold new works of art have been unveiled on walls and in public spaces across the capital today, bringing the inspirational stories of women from London’s history to light.

The 20 artworks, which pay tribute to unknown women who have played a crucial role in the capital’s history, have been curated by The Tate Collective.

The project, LDN WMN, features new work from a range of emerging and established London women and non-binary artists.  The artist Soofiya has reimagined reporter and activist Jackie Foster with a large and bright artwork on Portobello Road, Susi Disorder’s back-lit digital graphics in Hammersmith celebrate suffragist Lolita Roy, Caroline Cardus brings a quote from suffragette Adelaide Knight to life in Canning Town, and Joy Miessi creates her first outdoor artwork as a dedication to the hundreds of women who built Waterloo Bridge. 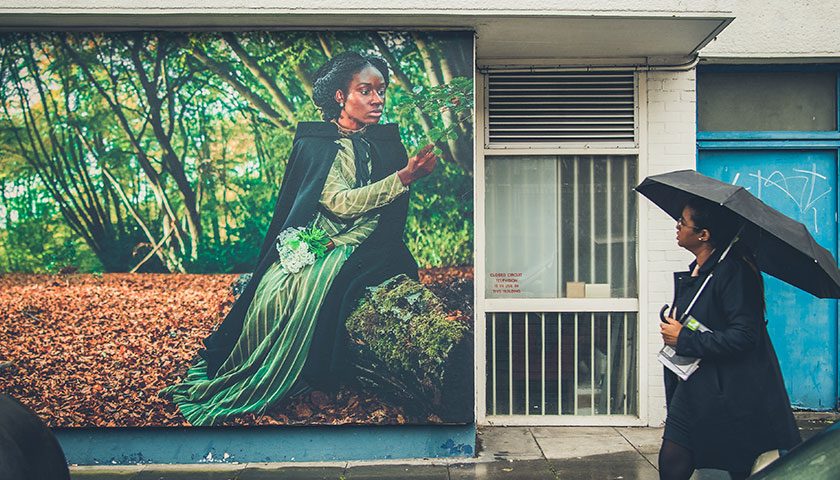 The exhibition is part of the Mayor of London’s women’s equality campaign, #BehindEveryGreatCity, to mark the centenary of the first women in the UK winning the right to vote, and drive forward gender equality across the city. Tate Collective has worked in partnership with City Hall to commission talented women and non-binary artists to create public artworks featuring women who have had a fundamental impact on the city.

LDN WMN has been funded by the Centenary Cities grant scheme, a £1.2 million government fund that is supporting the celebration of the Women’s Suffrage Centenary in seven cities and towns in England with a strong suffrage history. The curation of the LDN WMN artworks has been supported by Tate, Jack Arts, the Southbank Centre, Network Rail, Alexandra Palace, Village Underground, the Old Truman Brewery and Works by Madge Gill.

The LDN WMN artworks are free for all to see from 18th October, with the works in place for at least 10 days – with some staying up for longer.

Today, a host of remarkable women are being honoured by a new generation of talented artists. As we mark 100 years since the first women secured the right to vote, it’s high time we make sure Londoners know the stories of these powerful figures in our history, who have been overlooked for too long. These 20 artworks in 20 different locations across the capital bring inspiring art to Londoners and visitors to our capital and provide a high profile platform for exceptional artists too.”

We are delighted that members of Tate Collective London were invited to curate this exciting initiative, highlighting the creativity of emerging artists and celebrating exceptional women. They have brought together an outstanding selection of young artists. It will be thrilling to see these artworks unveiled across London.”

Tate Collective are passionate about art accessibility for young people, especially the making of art which engages in new and exciting ways and encourages people who feel excluded from the art world. That’s why LDN WMN was such an exciting project to curate; putting the artworks in public spaces makes art accessible in our everyday life. We have commissioned a mix of contemporary artists to represent the stories of important, but underrepresented historical women, navigating identity, culture and freedom in London and beyond.”