As key environmental legislation on plastic pollution is implemented across the EU, environmental campaigners, City to Sea, have warned that England is falling behind the rest of Europe despite promises of a ‘Green Brexit’.

Despite Scotland and Wales joining other EU countries in adopting plans and legislation to ban the top 15 most polluting single-use plastics such as plastic cutlery, plates and polystyrene food packaging, one year after the rules were adopted across Europe, England still has no draft legislation in place. Campaigners say that England is now at risk of being the only country in Europe to not have a ban on these top polluting plastic items.

The warning comes on the back of a newly released annual assessment by the Rethink Plastic alliance and members of the Break Free From Plastic movement that details the progress of other EU countries. With Scotland implementing a ban this summer and Wales having now published it’s draft bill that comes before the Senedd in the coming months, England is falling behind even the worst offenders, which are dubbed “laggards” in the report. Italy for example, who is singled out in the report for failing to include bioplastics in its ban of these single-use plastic items have, at least, banned some of the most polluting conventional plastics.

The warning comes from the not-for-profit, City to Sea, who has slammed the lack of action from Defra in delivering on its promise to ban some of the most polluting single-use plastics – such as plastic cutlery, plates and polystyrene food packaging all of which are covered in the EU Single-Use Plastics Directive. In February 2022, City to Sea joined forces with Greenpeace and campaigners 38 Degrees to hand in a petition with over 117,000 signatures to Downing Street demanding a complete ban.

More than 50,000 of those who signed the petition also went on to respond to the Defra consultation, demanding that the most polluting single-use plastic items should be banned. The vast majority of respondents backed a ban on all the items being considered – such as cutlery, plates and polystyrene takeaway containers – with support at 96% or above across the board. Crucially, almost two thirds (64%) thought the government needed to introduce the ban without delay. 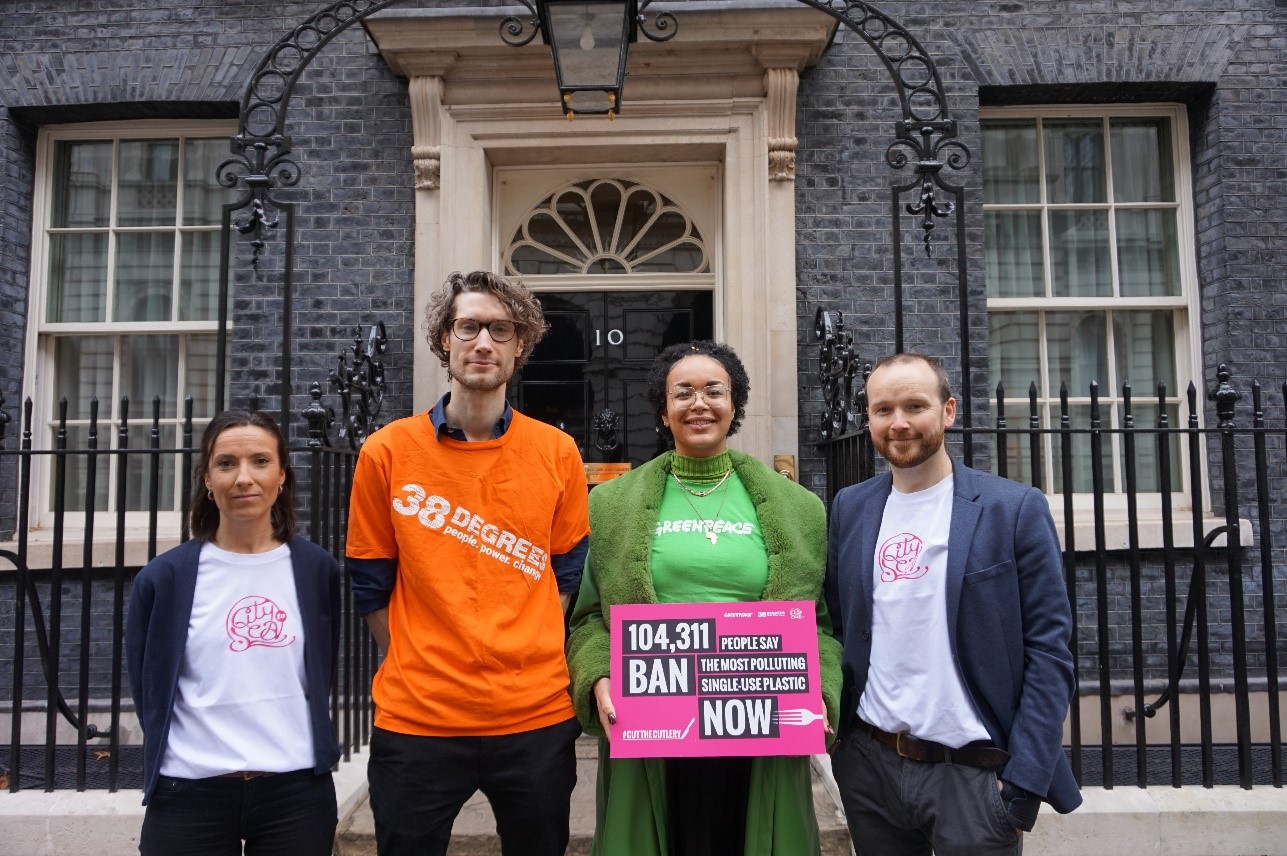 City to Sea/Greenpeace and 38 Degrees outside 10 Downing Street handing in a petition calling on the banning of the most polluting single-use plastics. Photo credit: City to Sea

“It’s frankly embarrassing that we’re having to, once again, point out that England is at risk of falling further behind the rest of Europe on key environmental standards post Brexit. We were promised a “Green Brexit” but have so far little to illustrate this. Instead, all we have is delay and political instability leaving the markets uncertain about if and when this ban will occur.

Their tardiness stands in contrast to the findings of today’s report that details how other European countries are progressing at phasing out the most polluting single-use items and in some cases like Sweden, Greece, Portugal and Ireland going much further. England desperately needs to catch up and get this important piece of legislation in place. ”

He continued, “We’re now over a year since EU member states needed to adopt this ban and other measures in the Directive. Even taking into account the recent political turmoil, I am lost for words at how 8 months after the close of the consultation its results are not even public. It’s leaving us trailing behind the rest of Europe when we could and should be leading in tackling plastic pollution. Now is the time for the new Secretary of State, Ranil Jayawardena, to take this up personally and make sure it is delivered as his government has repeatedly promised.”

It’s not all doom and gloom though, the new report shows real progress by other countries. Top performers in 2021 (Greece, France, Sweden, Ireland and Estonia) were joined in 2022 by Luxembourg, Denmark, Cyprus, Slovenia, Latvia, Spain and Portugal. Some of these countries even showed higher ambition than what was required by the EU Directive, notably on the measures to achieve consumption reduction for non-banned items and had taken significant strides to implement Extended Producer Responsibility (EPR).   Examples include: 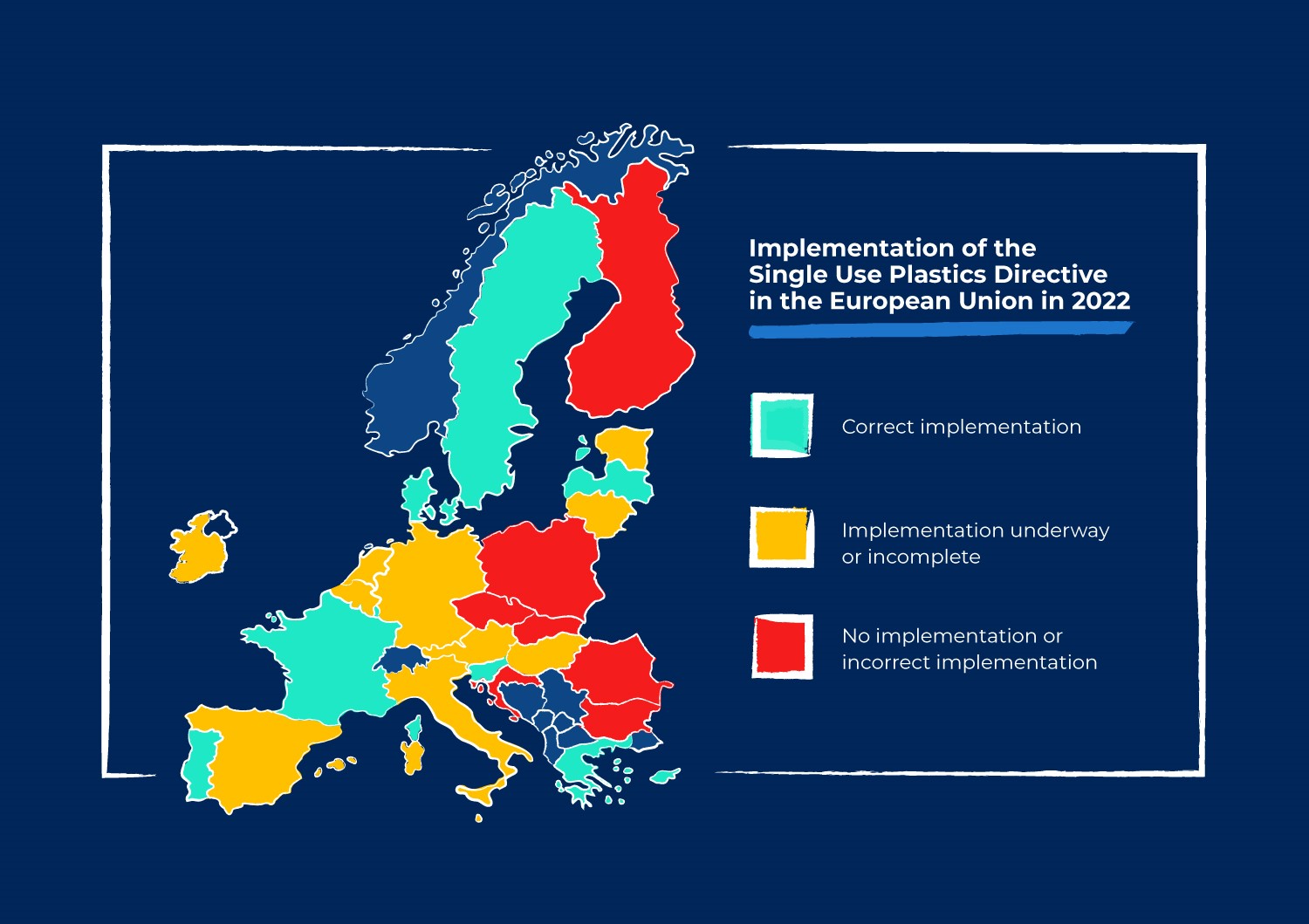 *The map shows the top performers leading the transition (highlighted in green), and the countries lagging behind in implementing effectively the mandatory EU measures to curb single-use plastic (in orange and red). England, if included in the assessment would have certainly been shaded in red