Oil and gas companies are putting investors at risk because their plans to reduce emissions rely on technologies that are expensive and unproven at scale, finds a report from the financial think tank Carbon Tracker released recently.

All but two of the 15 largest publicly traded oil and gas companies have updated their climate targets since May 2021, but the report warns that most are failing to commit to absolute cuts in emissions and it questions the credibility of company plans which seek to make room for new production.

Eni is one of only four companies to accept absolute cuts in emissions from the production and use of its products and has the strongest climate policy: it pledged a 35% cut by 2030, up from its previous 25% target. All North American companies lag behind Europeans and ExxonMobil has the weakest policy: it adopted a net zero target last year but has not pledged specific cuts and excludes 95% of lifecycle emissions from the products it sells.

No new investment in fossil fuel production is needed if the world is to meet the 1.5°C Paris climate target and avoid the worst impacts of climate change, according to the International Energy Agency. Demand is set to fall over time as a result of governments’ climate policies, the rapid growth of clean technologies, and the drive for energy independence following Russia’s invasion of Ukraine. Investors concerned about climate change and the risk of stranded assets are putting increasing pressure on oil and gas companies to align their plans with Paris.

Mike Coffin, Carbon Tracker Head of Oil, Gas and Mining and report author, said: “Financial institutions must scrutinise companies’ emissions targets and whether their plans to achieve them are practical and credible in order to assess alignment with global climate goals. This is particularly so for companies which seek to “create space” for further fossil investment. The best way for companies to reduce both their climate impact and transition risk exposure for investors is to allow their existing production to decline without investing in new assets.”

All but one of the 15  companies have announced plans to use EMTs:

Maeve O’Connor, Carbon Tracker Analyst and report author, said: “Oil and gas companies are gambling on emissions mitigation technologies that pose a huge risk to both investors and the climate. Most of these technologies are still at an early stage of development, with few large projects working at anything like the scale required by company goals, while solutions that involve tree planting require huge areas of land. It remains to be seen whether these technologies will be technically feasible or economically viable given the huge costs involved.”

“While limiting global temperature rise to 1.5°C will likely require some level of EMTs, they should be used to reduce or offset emissions for sectors like aviation or chemicals, where few low-carbon alternatives currently exist, rather than to justify new fossil production.”

The report warns that if EMT projects fail to capture or offset the intended amount of carbon, companies could face litigation, regulatory sanctions, and reputational damage: Chevron, Shell and ExxonMobil have been obliged to buy AU$184 million of carbon offsets because their jointly owned Gorgon carbon capture plant in Australia failed to meet targets agreed with the government. If companies do go ahead with new production, relying on EMTs to offset carbon, this will impose extra costs and therefore increase the risk that assets will be stranded.

The report also warns investors that two other strategies to reduce emissions lack credibility. BP and ExxonMobil are among companies selling assets, but this just shifts emissions from one owner to another who could increase production or operate under less stringent environmental standards. Eni has purchased carbon credits from a 10,000 square kilometre  forest in Zambia and used them to deliver “carbon neutral” liquefied natural gas, but offsetting has been plagued with controversies about the real-life impact of schemes.

For the third year running Carbon Tracker’s Absolute Impact report assesses and ranks climate policies, expanding its analysis to cover the 15 largest publicly traded oil and gas companies. It warns that net zero targets are not enough for companies to be aligned with Paris – they need absolute limits on future emissions and significant interim targets.

Carbon Tracker ranked the companies’ climate policies by assessing three key criteria which it says are a minimum precondition for claiming to be aligned with Paris. They must: 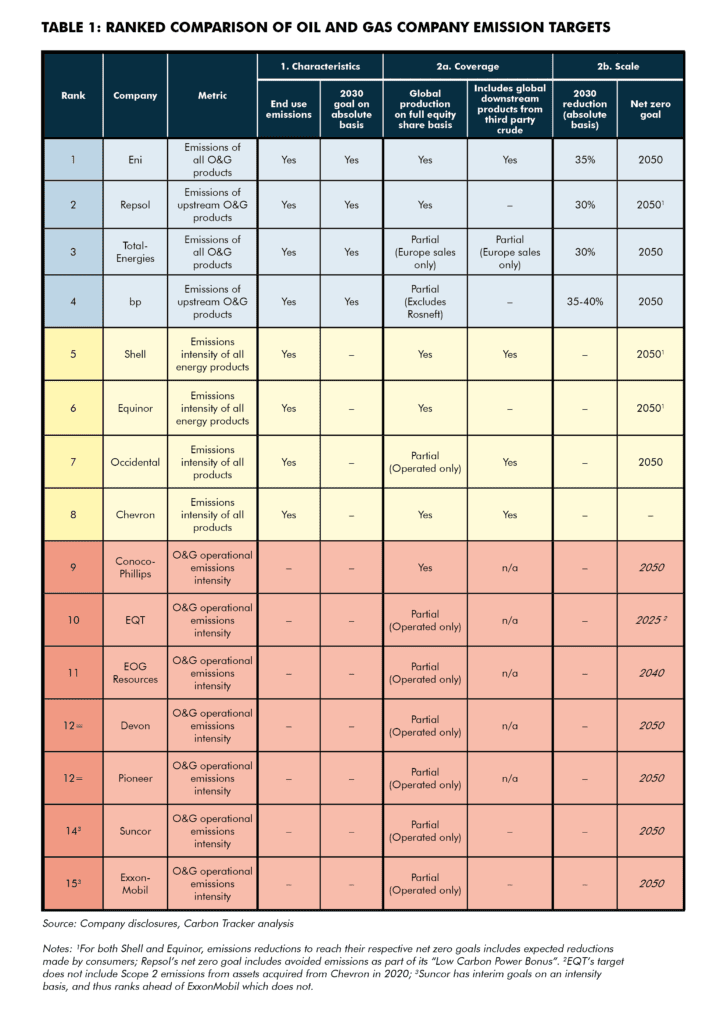 The report can be downloaded here: https://carbontracker.org/reports/absolute-impact-2022/