WNET, one of public television’s most innovative and well-respected media providers for over 50 years, has worked with agency Interplanetary to develop their first advocacy campaign for THIRTEEN, WNET’s tri-state-area (New York, New Jersey and Connecticut) PBS affiliate. Launching this week, the campaign“ THIRTEEN IS WORTH FIGHTING FOR” is meant to inspire and encourage the public to show support for THIRTEEN, before Congress possibly severely cuts or defunds the Corporation for Public Broadcasting, an important source of funding for THIRTEEN and all PBS and NPR stations.

The campaign focuses on generating impact through individual action, with lines such as, “If you believe THIRTEEN is worth fighting for, join us. ” The copy is enhanced with visuals of some of the most beloved images from THIRTEEN’S lineup of acclaimed PBS programming, including the popular American Masters and Great Performances series and a variety of renowned children’s programs from Cyberchase to Sesame Street. The campaign message aligns with THIRTEEN’S core programming and is reflected in the call to action, “FIGHT FOR THE ARTS” and “FIGHT FOR KIDS”. 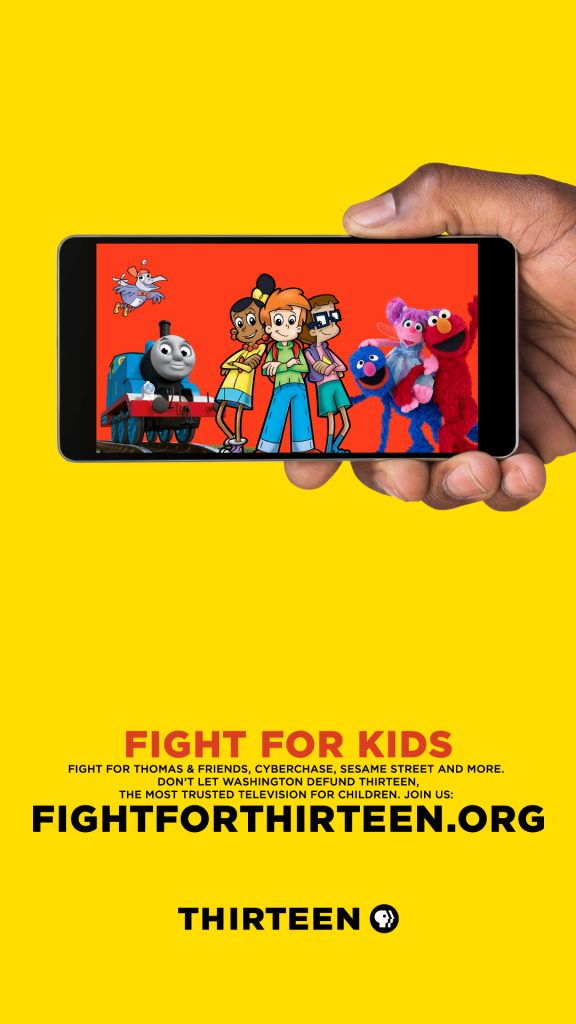 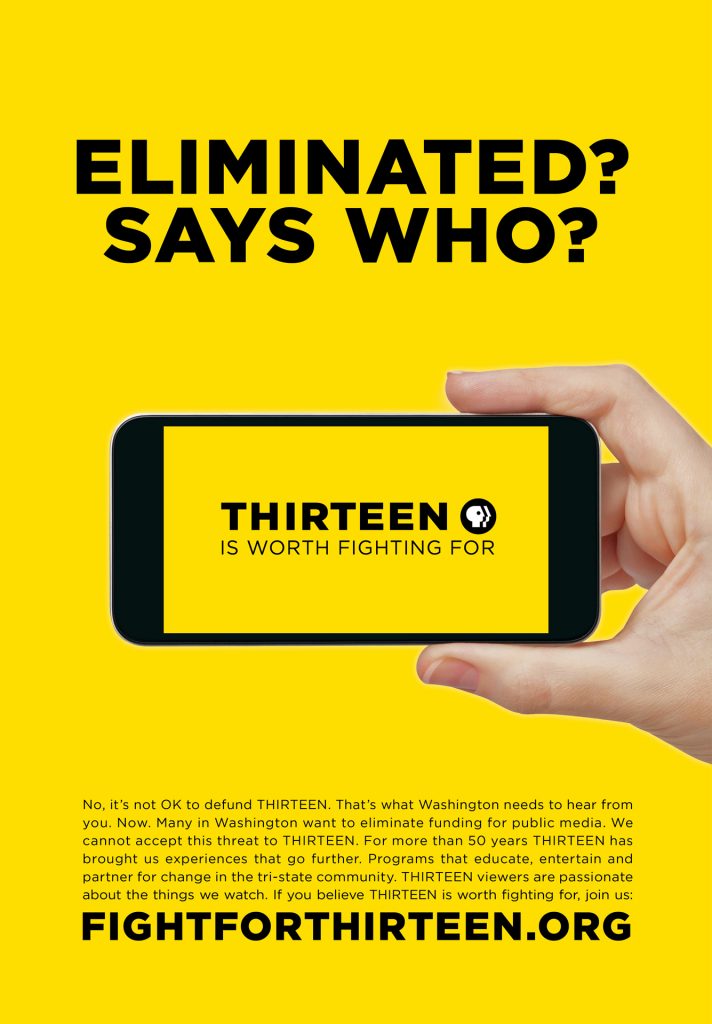 Creative executions include digital and out-of-home. The campaign continues through the summer. The overarching goal of the campaign is to generate greater awareness of the issue and heighten consumer engagement. The campaign also seeks to ensure that viewers and supporters as well as members of the New York community grasp the ramifications of Congress’s budget decision, since many may be unaware that THIRTEEN produces several of PBS viewers’ favorite programs nationally including the popular series Nature, American Masters, Secrets of the Dead and Great Performances and these programs may stand to be affected by changes to CPB funding in the federal budget.

This is Interplanetary’s initial engagement with THIRTEEN with additional projects in the works for later in the year.

For those wishing to do something please visit: https://www.thirteen.org/fight-for-thirteen/

THIRTEEN is one of America’s most respected and innovative public media providers. A member of the WNET family of companies, THIRTEEN is a unique cultural and educational institution that harnesses the power of television and electronic media to inform, enlighten, entertain and inspire.

The flagship public television station of the New York City tri-state area and the most-watched public television channel in the nation, THIRTEEN reaches millions of people with programming that celebrates arts and culture, offers insightful commentary on the news of the day, explores the worlds of science and nature, and invites people of all ages to have fun while learning. 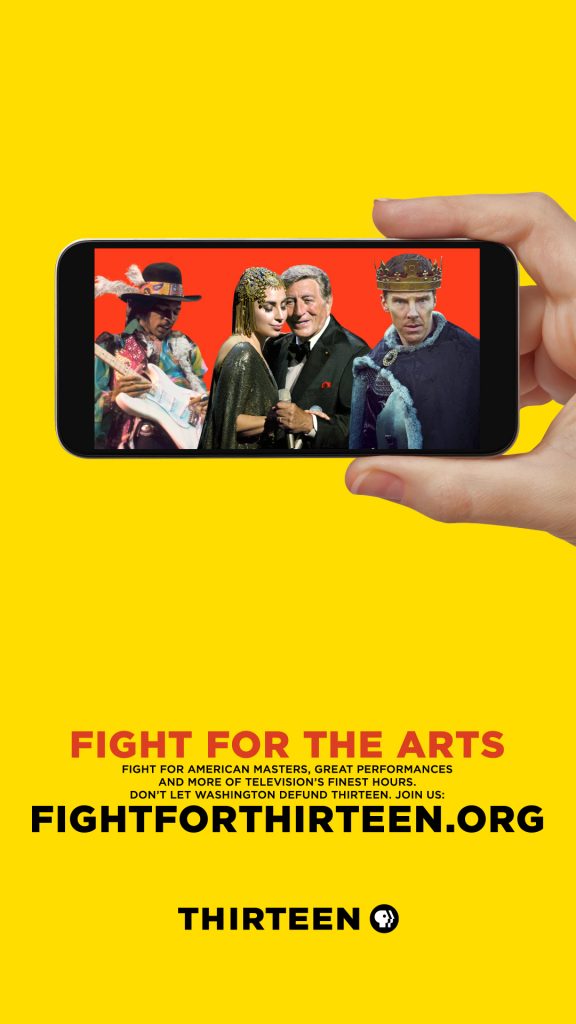 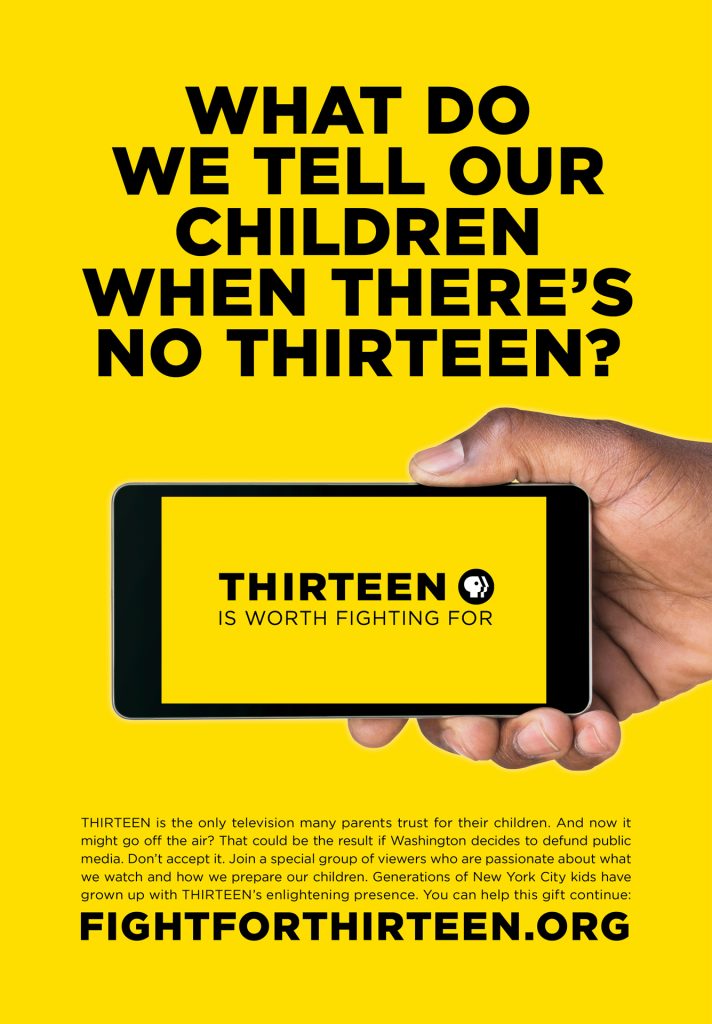 THIRTEEN’s broadcast schedule features a dynamic mix of programming, much of it created by THIRTEEN which is PBS’s flagship station, including: Nature, American Masters, Great Performances, Cyberchase, and PBS NewsHour Weekend. THIRTEEN also produces a range of local programming, including Reel 13, an on-air, online film series; Treasures of New York,  NYC-ARTS, a weekly showcase for the city’s cultural offerings, and MetroFocus, the multi-platform news magazine focusing on the New York region.

As part of its mission to use media to create lifelong learning opportunities, THIRTEEN’s Education department extends the life of on-air programming through online initiatives, supplemental teaching material and community outreach.

Largely supported by private and foundation contributions, THIRTEEN is among the largest membership organizations in the New York area. THIRTEEN receives annual contributions from hundreds of thousands of members. National and local corporations and foundations provide general support and underwriting for specific programs and projects. Major philanthropic donations from individuals are another key source of funds. Approximately one third of THIRTEEN’s operating budget is derived from government sources.