PC Chandra Jewellers, working with JWT Kolkata, have released a short documentary entitled ‘Daughters of Clay’ to highlight the great work female sculptors are doing and also to highlight the gender bias in the community.

Since time immemorial, the worship of Devi Durga has been the biggest celebration of women power. However, even to this day women don’t get equal recognition for their talent, as their male counterparts.

Even in Kumartuli, the potter’s colony that creates nearly 4000 durga idols every year, women’s contribution is either almost non-existent or not recognised. The very concept of a women clay sculptor is very often looked down upon. Traditionally it’s a male bastion, the craft of clay modelling being handed down from the father to the son. And rarely to a daughter. However, the times are changing. The ‘Daughters of Kumartuli’, are challenging this ancient monopoly, with the warrior Goddess as their idol of strength.

PC Chandra Jewellers present Kanya Rupeno, Daughters of Clay, a short documentary on the ‘Daughters of Kumartuli’ who have turned the tide to create a niche for themselves. Born in an atmosphere where girls are discouraged from even entering the potter’s studio, this documentary showcases the journey of three women who braved apathy, ridicule and gender bias just to follow their heart. They are the flagbearers of women power in Kumartuli today. 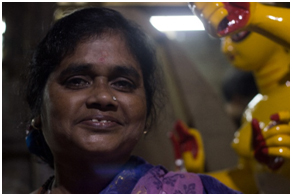 The youngest of 6 siblings, China Pal, earned the ire of her father when he found her playing with clay in his studio. Though he never discouraged her, there was no support from him either. It was only after her father’s demise in 1994, that Chinalistened to her inner calling and decided to keep his studio running. She remained firm as a rock through the waves of ridicule that surrounded her every day. There were many who advised her to sell off the studio and retire with the money but she stayed adamant in the pursuit of her dreams. Today, after 20 years in the business, China Pal is happy that she has been able to become the flag-bearer of her father’s traditional style of ‘Ekchala’ idols. 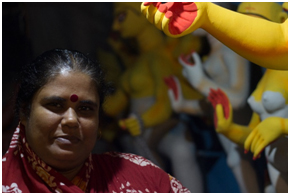 Growing up in a traditional potter household, Kakoli Pal’s childhood was like any other girl in Kumartuli – she was forbidden to step inside the studio and not allowed to play with clay. Making an idol was somewhat of a distant dream. Her days passed doing chores like any other house wife but in a cruel twist of fate her husband Asim Pal, passed away suddenly, just the day after Lakshmi Pujain 2003. Kakoli was left with no choice. With 2 daughters to take care of, and several Kali idols yet to be delivered, Kakoli decided to get her hands dirty. Ever since, the studio has been her home. In the last 14 years, she has expanded the business. While her husband could manage to do 5-7 Durga idols a year, this year alone Kakoli is on course to deliver 22 idols of the goddess. 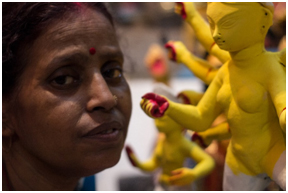 As a kid, Mala Pal imitated her father by creating small, crude figurines out of clay. Though her father didn’t encourage her much, Mala pursued her passion with all honesty. Her elder brother Kalu-da spotted the potential and mentored her. Under his guidance she learnedthe nuances of clay modelling. After her father’s death in 1985, Mala decided to run the studio herself. Initially there was a lot of resistance from her peers within Kumartuli. However, her diligence and love of this craft kept her going. The customers who once deserted the studio started coming back and her business grew steadily over the years. Today, her miniature idols are not only shipped to Delhi, Bangalore and Mumbai but also across the seas to the US, Canada, Germany and Dubai as well.

Speaking on this initiative, U.K Chandra, Managing Director of P.C. Chandra Jewellers said, “By spelling out the stories of these three strong-willed women the ‘Kanya Rupeno’ documentary celebrates the inspirational journey of China Pal, Mala Pal and Kakoli Pal. It reminds us to empower our daughters as well, so that they can follow their dreams, stand up for themselves and make everyone proud with their stories of success.”

Arjun Mukherjee, VP & ECD, JWT Kolkata, says, “This year Daughter’s Day and the onset of Durga Puja coincided on the same date. The challenge was to cut through the clutter of feel good communication and tell an inspirational story that celebrates true woman power. ‘Daughters of Clay’ is an honest, non-gimmicky portrayal of three women potters of Kumartuli, real life goddesses who rose in their male dominated environs to follow their heart. No wonder this documentary has become, probably the most inspirational pieces of work this Durga Puja.”

It’s great to see a company like PC Chandra Jewellers work with a creative agency like JWT Kolkata to produce something like this. It is important to show that things worldwide are changing and women are just as capable of many jobs which were seen as tradionally male, and this shows this. It is great to see these tradional male bastions being broken down by equally talented women who are more than capable, we must showcase the gender bias and show how it is not true that women are not every bit as capable as men in these tradionally male roles and this film helps do that.