Revolver Brewing has released a new beer, with 100 percent of all profits going directly to charities actively serving coastal communities affected by the devastation from Hurricane Harvey. 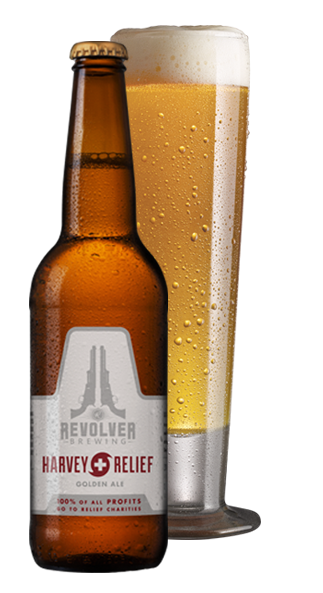 Called Harvey Relief Golden Ale, the Texas-only brew will be found across the state on draught and in six-packs. As efforts continue, Revolver will identify charities that are assisting those affected by Hurricane Harvey. The first of those charities will be the Rebuilding Texas Fund—a Keep Texas Beautiful initiative providing tools and resources for Harvey cleanup and rebuilding efforts.

Revolver founders Ron and Rhett Keisler and brewmaster Grant Wood all have strong roots in Texas, and immediately knew they wanted to help. The special brew was underway within a week.

“Our hearts go out to everyone dealing with the aftermath of this tragedy,” said Rhett Keisler. “Having grown up in Sugar Land, helping our beautiful home state bounce back from Harvey was a no-brainer for us and what better way to do this than by doing what we do best—brewing a beer for our fellow Texans who share this common goal.”

Harvey Relief Golden Ale is the latest support from the brewery, which helped deliver thousands of cans of drinking water to Hurricane Harvey victims immediately following the storm.