On October the 5th Elon Musk replied to someone asking if Tesla‘s solar powered technology could be used to help rebuild the power supply system in Puerto Riico, he replied:

The Tesla team has done this for many smaller islands around the world, but there is no scalability limit, so it can be done for Puerto Rico too. Such a decision would be in the hands of the PR govt, PUC, any commercial stakeholders and, most importantly, the people of PR.

This prompted  a reply from the Governer of Puerto Rico:

@elonMusk Let's talk. Do you want to show the world the power and scalability of your #TeslaTechnologies? PR could be that flagship project. https://t.co/McnHKwisqc

Never one to shirk a challenge, nor miss a PR opportunity Tesla moved and now the company’s Twitter account has shared a set of new photos showing off a new solar panel installation at Hospital del Niño in Guaynabo, calling it the “first of many” solar and storage initiatives planned to bring power to the people of Puerto Rico.

Hospital del Niño is first of many solar+storage projects going live. Grateful to support the recovery of Puerto Rico with @ricardorossello pic.twitter.com/JfAu11UBYg

The photos show off rows of newly installed solar panels filling up a car park and one of Tesla’s Powerpack batteries. Each Powerpack can can store up to 210 kWh of power, which in this case will be produced by the solar panels. The facility will provide power to Hospital del Niño, with a combination of solar cells and Tesla’s Powerpack commercial energy storage batteries. That should mean it can not only generate power from the sun’s rays in times of need, but also store up a reserve that can be used to provide power around the clock and throughout varying weather conditions, even when the sun isn’t shining. The installation is capable of generating 500 kilowatts of power, enough to run most of the hospital’s equipment. The hospital does have backup diesel generators in case they run out of solar power, but now they don’t have to depend on those generators exclusively. It is estimated that at the moment only 24.4 percent of the island has access to power. 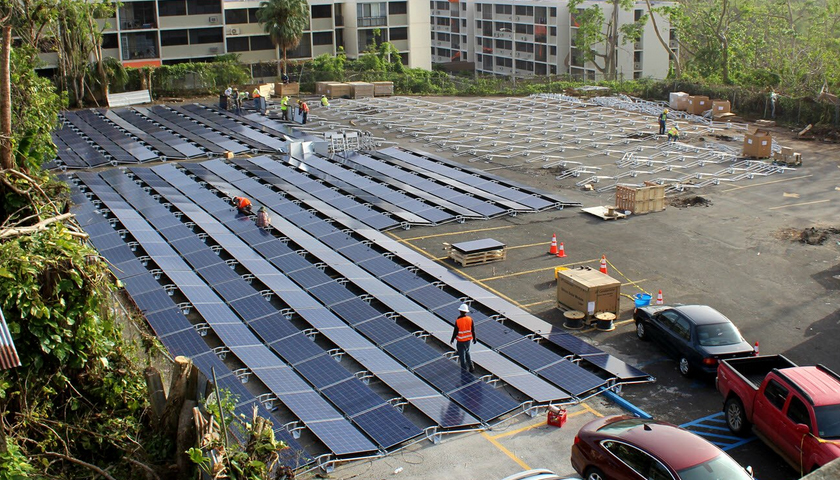 Musk himself donated $250,000 of his personal money to support relief efforts. Tesla also postponed its electric semi truck reveal event to November in order to focus on helping establish facilities like this one in Puerto Rico.