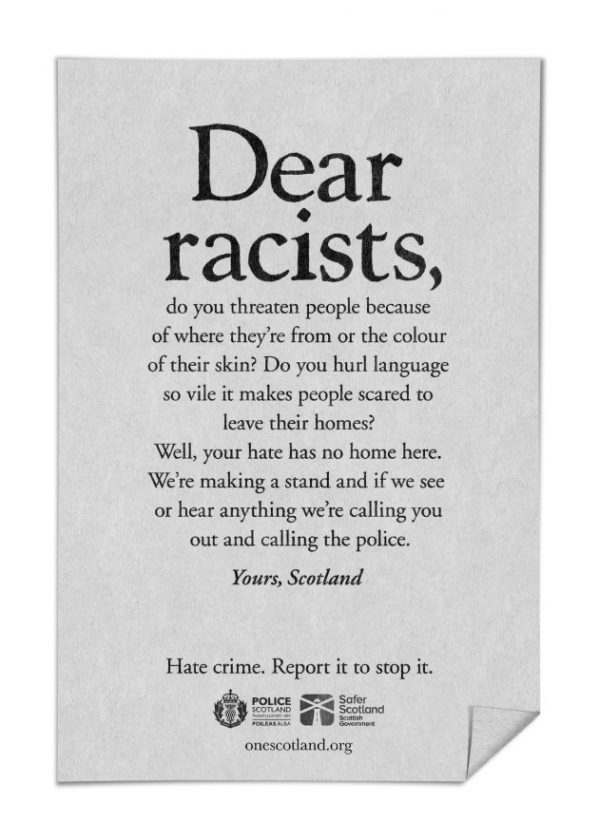 In Scotland, the law recognises hate crimes as motivated by prejudice based on race, religion, sexual orientation, transgender identity and disability. New research reveals that over 80% of people in Scotland would report a mugging of an elderly lady or a house break in in their street to the police. However, only 43% would report online bullying due to someone’s religion and just over half of people would report intimidating or humiliating behaviour towards a transgender person (54%) or racially motivated verbal abuse or name calling (53%).

Cabinet Secretary for Communities, Aileen Campbell, said:“Hate crime has hugely damaging effects on victims, their families and communities and we all must play our part to challenge it.

“We are committed to working across government in order to build a fairer Scotland where there is simply no place for hatred and prejudice and where everyone feels connected, has a sense of belonging and feels valued.

“Everyone must be empowered to achieve their potential irrespective of race, faith, sexual orientation, transgender identity or disability.”

The ‘letters’ speak on behalf of Scotland and carry the clear message that hate crime is not welcome in Scotland and encourages everyone who witnesses or experiences it to report it.

Cabinet Secretary for Justice, Humza Yousaf, said:“As somebody who has faced Islamaphobic and racial abuse over the years, I know how upsetting being a victim of hate can be. Hate crime and prejudice are completely unacceptable and we are absolutely committed to tackling it.

“We all have a role to play in stamping out prejudice and I would ask anyone who witnesses a hate crime to play their part and report it.

“Justice agencies such the police and Crown Office will deal sensitively with reports made and people should have confidence in how they will be treated.  Last year there were over 5,300 charges of hate crime reported to the Procurator Fiscal in Scotland but there are still many incidents that are going unreported.”

“We continue to work tirelessly to ensure we respond to all reports of hate crime and I would encourage anyone who has been the victim of, or witnessed, a hate crime to report it.

“In an emergency calls should be made to 999 otherwise incidents can be reported through 101 or via third party organisations, details of which can be found on the Police Scotland website.”

Victim of hate crime Henrietta Mochrie said: “I’ve experienced so many incidents of hate crime because I’m transgender. I’ll often get street harassment, sometimes this has escalated to the point where I’ve been followed by people shouting abuse at me, just because of who I am. It makes me feel really down and scared to leave the house.It’s important that if you witness hate crime that you report it to take a stand against hate.”

The campaign will run across multiple channels including radio, outdoor, press, PR, social media and digital advertising. A series of case study films will highlight the real voices of hate crime victims and witnesses and will be released during the campaign on onescotland.org and shown on @ScotGovFairer social media channels.