Employee volunteers from energy company Exelon kicked off the holiday season by contributing 14,000 volunteer hours and participating in more than 150 service projects in support of #GivingTuesday, the national day of giving. More than 1,500 Exelon volunteers in 39 cities are participating and have expanded their efforts this year by taking part in charitable activities throughout the month of November. 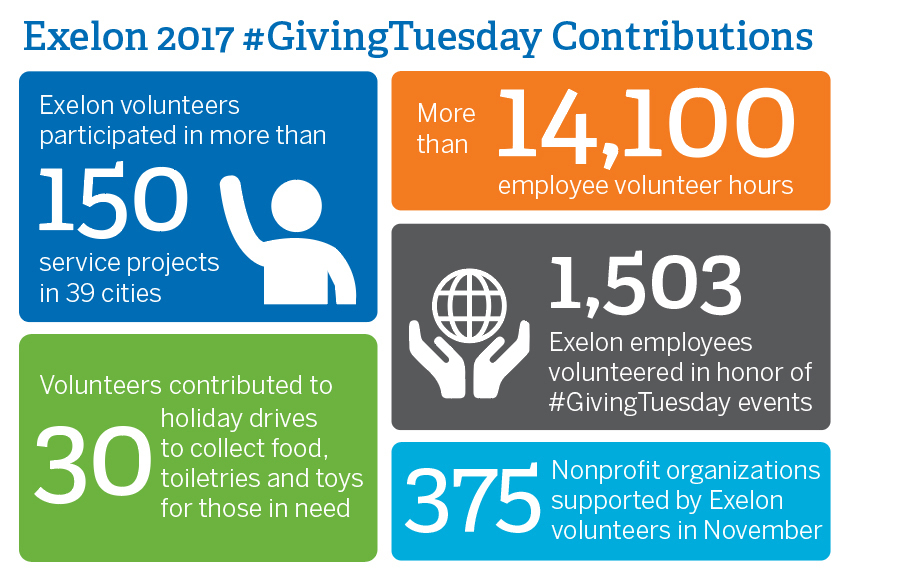 #GivingTuesday, which falls on the Tuesday after Thanksgiving, encourages acts of kindness and generosity from individuals, civic organizations and businesses to help foster lasting change in communities. Throughout the year, Exelon matches employee charitable donations of $25 or more dollar-for-dollar. On #GivingTuesday, Exelon will not only match employee contributions dollar-for-dollar, but will also contribute an additional $100 on employee donations of $100 or more to their charity of choice.

So far in 2017, employees have pledged more than $8.2 million through Exelon’s Employee Giving Campaign, exceeding the company’s goal and breaking previous records.

“We are proud to be part of the #GivingTuesday campaign and support its mission to bring people together through community service,” said Maggie FitzPatrick, senior vice president of Corporate Affairs, Philanthropy and Customer Engagement at Exelon. “Exelon employees across the country are passionate about giving back to the communities where we live and work – dedicating more than 176,000 hours to community service so far this year. It’s one of the many ways we are living our values during the holidays and throughout the year.”

Exelon’s community programs engage employees in volunteer and charitable giving opportunities that enrich them personally and professionally, while positively impacting the community year-round. In the month of November alone, Exelon volunteer activities included:

Volunteers for #GivingTuesday service projects include employees from all of Exelon’s businesses, including Atlantic City Electric in New Jersey; Delmarva Power and Light headquartered in Delaware; BGE and Constellation headquartered in Maryland; ComEd in northern Illinois; PECO in southeastern Pennsylvania; Pepco in Washington, D.C.; and Exelon Generation and the Exelon Business Services Company in Illinois and across the mid-Atlantic region.

To learn more about Exelon’s initiatives to support communities, visit exeloncorp.com/community and follow the hashtag #ExelonVolunteers.