This is a guest post from Clearabee Rubbish Removal talking about some of the people in their own field pushing the boundaries:

From Land To Sea

As Clearabee concentrates on rubbish removal on terra firma, two other forward thinking companies have teamed up to work on rubbish removal from our oceans. The first is a company with one of the most recognized brands in the world, Adidas. This company is largest manufacturer of sportswear in Europe and the second largest producer of sportswear worldwide, so the impact of what they are doing will be huge. Since 2015, they have been collaborating with Parley For the Oceans, founded by Cyrill Gutsch after a very successful career as a brand marketer.

There is a Dire Need For This Effort

According to Ocean Crusaders, there are a mind boggling 5.25 trillion pieces of plastic debris circulating in our oceans! 269,000 tons of plastic float on the surface of the ocean, much of it in large gyres, bigger than the continents! The plastic is also found in the deep sea, with approximately four billion fibers of plastic per single square kilometer! Many experts predict that if we don’t do something about this problem soon the the commercial fisheries of wild fish and seafood will end some time in the middle of this century!

In July 2015, Adidas and Parley For the Oceans released a prototype of their first recycled ocean debris sneaker at the United Nations. Then, on 8 June 2016, World Oceans Day, they released a limited edition recycled ocean debris running shoe, designed by Alexander Taylor, based in London. The uppers were woven from green synthetic fibers made from a gill net dredged from the ocean and causing destruction to marine life and habitat. Only fifty of these sneakers were produced and to be one selected as one of the lucky few who got them, contestants were asked to submit via Instagram a video describing how they would no longer buy products using single use plastic. 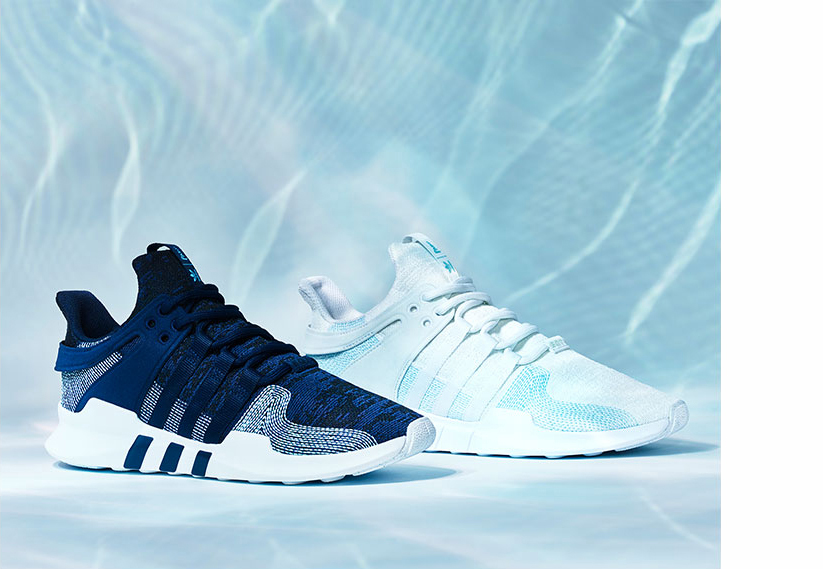 In time for the holiday buying season, the dynamic duo is prepared to release another sneaker made with recycled ocean debris on October 14, 2017. This shoe is officially dubbed: Parley For The Oceans x Adidas EQT Support ADV. The shoe will be released in two color palettes, both nautical themed. The lighter version will be white and icey blue and  the darker version will be navy and icey blue. The uppers are woven from thread made from recycled plastic bottles retrieved from the ocean and soles are made from recycled plastic plus a bit of recycled rubber on the heel. Adidas and Parley For the Oceans are planning to roll out a full collection of these recycled sneakers this coming spring 2018. Both consumers and stores seem very excited to get them.

Adidas has publicly declared on the company’s official website that they endeavor to phase out virgin plastic from all their products, i.e. use only recycled plastic from rubbish removal in their products. They describe this as “spinning the problem into a solution,” in reference to using plastic rubbish to make plastic yarn that is then spun into their upcycled sportswear. Further, they have committed to producing more than one million pairs of these recycled shoes in 2017 in association with Parley for the Oceans! In an interview with Dezeen Magazine, owned by Vox Media and based in London, Cyrill Gutsch stated “We need to reinvent plastic… we created something that we call Parley Ocean Plastic… that is based on all that trash that we find in the sea… which makes it very very attractive for brands to use.”

What’s In Store For the Future

Will Nike, Reebok, New Balance, and other sportswear superstars follow Adidas’ lead? We hope so! Sports get a lot of international media attention. As more athletes and sports fans start wearing these products, it will raise awareness of just how much plastic is already causing destruction in our world oceans. Eliminating virgin plastic from the textile industry, and recycling what is already there from rubbish removal, gives us all new hope for the legacy we leave future generations.

Clearabee, one of the fastest growing rubbish removal companies in the world, has captivated the attention of the press and their customers alike with their worldview toward rubbish removal. Using modern technology as a tool, this company is able to divert approximately ninety percent of the rubbish they clear from going into UK landfills. Furthermore, as a corporate leader in sustainability, the Clearabee team rejoices when they hear about other companies joining them in this effort.