Hywind Scotland, the first floating wind farm in the world, has started to deliver electricity to the Scottish grid. The First Minister of Scotland, Nicola Sturgeon, has officially opened the wind farm.

The 30MW wind farm, operated by Statoil in partnership with Masdar, is located 25 kilometers offshore Peterhead in Aberdeenshire, Scotland and will power approximately 20,000 households.“Hywind can be used for water depths up to 800 meters, thus opening up areas that so far have been inaccessible for offshore wind. The learnings from Hywind Scotland will pave the way for new global market opportunities for floating offshore wind energy. Through their government’s support to develop the Hywind Scotland project, the UK and Scotland are now at the forefront of the development of this exciting new technology. Statoil looks forward to exploring the next steps for floating offshore wind,” says Irene Rummelhoff, executive vice president of the New Energy Solutions business area in Statoil.

In an opening event in Aberdeen the Scottish First Minister Nicola Sturgeon officially opens the world’s first floating wind farm.“I am delighted to open Hywind Scotland—the world’s first floating wind farm. Hywind will provide clean energy to over twenty thousand homes and will help us meet our ambitious climate change targets.”“This marks an exciting development for renewable energy in Scotland.  Our support for floating offshore wind is testament to this government’s commitment to the development of this technology and, coupled with Statoil’s Battery Storage Project, Batwind, puts us at the forefront of this global race and positions Scotland as a world centre for energy innovation,” says the First Minister.

Gina Hanrahan, Acting Head of Policy at WWF Scotland said of the new station: “With around a quarter of Europe’s offshore wind resource in Scotland, it’s great to see the world’s first floating windfarm inaugurated off our coast. Offshore wind is already an industrial success story across the UK, cutting emissions, creating jobs and dramatically driving down costs. By demonstrating the commercial viability of floating wind, Scotland can help to develop the industry in new frontiers and deeper waters.“With this kind of innovation and investment, and continued political support, Scotland will continue to power towards our target of securing half of all our energy needs form renewable sources by 2030.”

Crown Estate Scotland leases seabed to renewables developers and works to encourage development and attract investment. Sian Wilson of Crown Estate Scotland said:“It’s fantastic to see Hywind Scotland up and running. The project is a great success for the teams at Statoil and Masdar and for Scotland, where floating wind could really flourish due to our accessible deeper waters. We are committed to continuing our work to encourage floating offshore wind projects, which will in turn drive down costs, benefitting the whole sector—as well as the climate and consumers.”

In recent years, there have been significant cost reductions in both the onshore and bottom fixed offshore wind sectors. Floating wind is expected to follow a similar downward trajectory over the next decade, making it cost competitive with other renewable energy sources.

“Statoil has an ambition to reduce the costs of energy from the Hywind floating wind farm to € 40-60 €/MWh by 2030. Knowing that up to 80% of the offshore wind resources are in deep waters (+60 meters) where traditional bottom fixed installations are not suitable, floating offshore wind is expected to play a significant role in the growth of offshore wind going forward,” says Rummelhoff.

Mohamed Al Ramahi, CEO of Masdar, is pointing to that future opportunities are already being assessed.

“Masdar has a long-standing commitment to renewable energy in the United Kingdom, and we are immensely proud to deliver our first project in Scotland alongside our partners,” says Al Ramahi.

“Hywind Scotland is showing that floating wind technology can be commercially viable wherever sea depths are too great for conventional fixed offshore wind power. This opens up a number of new geographies, and we are already looking at future opportunities with our partners, building on our existing international portfolio in onshore and offshore wind energy, and solar power,” he says. 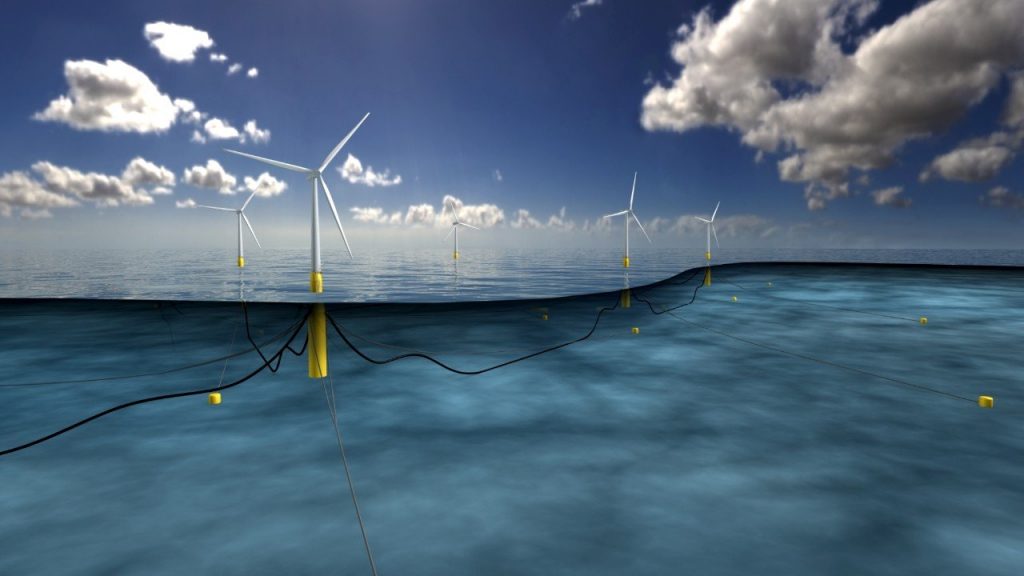 Friends of the Earth Scotland Director Dr Richard Dixon warmly welcomed the opening: “The wind farm opening off Peterhead is a sign of the great progress that Scotland has made in embracing the renewable energy revolution. Together with partners from around the globe we will make history with the world’s first ever floating wind farm. We can be rightly proud of the role that Scottish effort and ingenuity has played in bringing this ground breaking project to fruition.

“Recent events including a series of hurricanes and wildfires in California have once again brought the urgency of tackling climate change to the fore. That’s why the success of innovative energy projects like Hywind are so vital in putting us on a path to a fossil free Scotland. This technology will enable wind farms to be built in previously inaccessible areas.”

Dr Dixon commented on the important role that offshore wind will play in decades to come:

“Both fixed and floating offshore wind farms are a key part of Scotland and the world’s energy future. Developing our huge offshore wind potential on a large scale is crucial for meeting Scotland’s ambitious climate and energy targets and delivering a fossil-free Scotland.

“Further support from both Holyrood and Westminster will be key in creating and driving forward the next generation of clean marine energy. The economic opportunities from becoming a world leader in renewable technologies are immense and Scotland’s natural advantages in this area must be capitalised upon.

“It is symbolic that clean energy history is being made in the North East, an area that has been suffering so much from the chaotic decline in the oil industry in recent years. The Scottish Government must plan for this inevitable transition away from fossil fuels by supporting workers currently in oil and gas sectors to transfer their skills and experience to a clean energy economy.”