Counter Terrorism Police have launched their first ever safety campaign which they believe will teach 11-16 year olds how to react in the unlikely event they are caught in a gun or knife terror attack, including being told NOT to stop and use their phones until they are safely away from danger.

Counter Terrorism Policing have enlisted the support of celebrities from entertainment and sport to launch their first-ever safety campaign aimed at children and teenagers.

TV star Bear Grylls and England footballer Jamie Vardy are among the leading stars supporting the first phase of a new initiative designed to teach 11-16 year olds how to react in the unlikely event they are caught in a gun or knife terror attack – including advice not to wait around taking pictures on their phones.

With the UK terror threat level at SEVERE, children will be taught to RUN if they are able to, HIDE if they are not, and TELL police of the threat only when it is safe to do so. They will also be advised to warn others about an on-going threat, and crucially told NOT to stop and use their phones until they are safely away from danger.

Previous messaging – which has formed part of the wider Action Counters Terrorism campaign – has been aimed at adults, but following extensive research with children and young people, security experts from the National Counter Terrorism Security Office (NaCTSO) have created age-appropriate safety advice to engage and empower a younger audience. 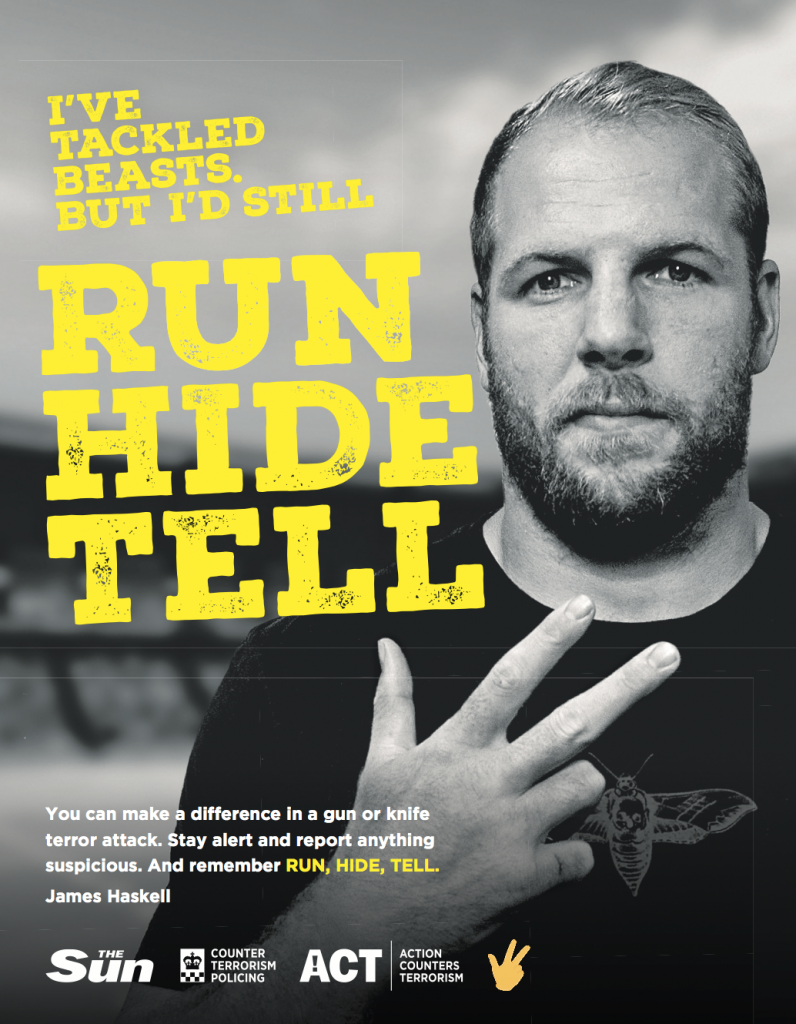 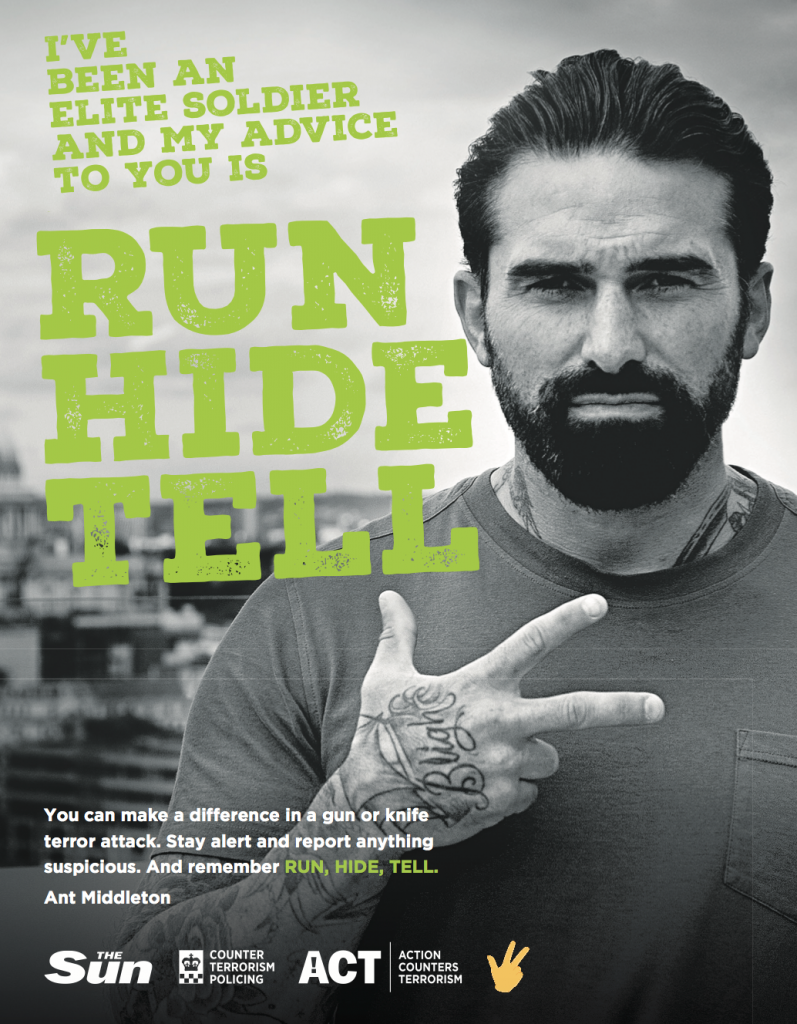 NaCTSO have also teamed up with key partners such as the NSPCC, Childline, The Sun and Educate Against Hate, to help and support parents who are understandably anxious about discussing such a topic with their children.

“We appreciate that talking to young people about terrorism can be scary, for parents and children alike,” said the National Lead for Protective Security, Deputy Assistant Commissioner Lucy D’Orsi.

“But the atrocities in London and Manchester have sadly resulted in some of the youngest victims of terror this country has ever seen, and if we are able to teach children to act in a way which could potentially save their lives then it is our responsibility to do so.

“We are particularly concerned when we see people – young and old – using their mobiles to film scenes when they should be moving away from the danger. The recent incident in Parsons Green is a good example of this.

“Our research showed that many young people think filming would be a good thing to provide evidence for police. We must get them to understand that the priority must be their safety.”

John Cameron, head of NSPCC Helplines, said: “Since April, Childline has already received more than 300 contacts from young people anxious about terrorism, so we know it’s a child welfare issue that is impacting on their emotional wellbeing.

“Adults can help a child by listening to their worries, reassuring them these events are rare, and teaching them to Run, Hide, and Tell.

“Although these conversations might be difficult, the spate of devastating events means that they cannot be brushed under the carpet and we all have a duty to help every child stay safe.”

Welcoming the Police’s new campaign, Security Minister, Ben Wallace, said: “Although weapons attacks are rare, events this year have been a stark reminder that everyone must know what to do if they are caught up in a terrorist incident, whatever their age.

“This should not stop young people from going out and enjoying the best years of their lives but being alert, not alarmed and knowing the Run, Hide, Tell advice could well be life saving.

“Today, I am encouraging parents to discuss this important advice with their children so that they know how to act should the worst happen.”

The partnership with The Sun has seen editorial and creative teams at the title get behind the campaign, as well as enlisting the support of high profile celebrities. They have created a ‘Run, Hide, Tell emoji’ for phase one, with features promoting the key messages appearing in paper throughout launch week.

Tony Gallagher, editor in chief, The Sun, said: “This is a hugely important campaign that will deliver critically important information to a young audience. Through paper, online and our social media platforms we’re delighted to do our bit in helping to ensure that the widest possible audience knows to Run, Hide and Tell”.

Bear Grylls said: I’ve tackled some of the most dangerous environments on earth, but in the event of a terrorist attack there is only one thing I would advise: Run, Hide, Tell.”

The campaign launch will be followed in October by a second, longer, video, designed to explain the ‘Run, Hide, Tell’ messaging, and also teach children how to spot and report suspicious behaviour or suspicious items.

Later phases of the campaign will then launch this messaging across youth groups such as the Scouts, Guides and Cadets, before finally being made part of the citizenship curriculum of formal education at schools and colleges.

The NSPCC has released advice for parents who want to talk to their children about terrorism, which can be found here.

What can parents do to talk to their children about what’s happened?