The Drum Marketing Awards are one of the industry’s most sought after accolades. Although there are many great agencies with great campaigns out there vying for a gong. I thought it might be nice to concentrate on the Cause Related Marketing Strategy of the Year. I will try to put together some info about the campaign and where possible some information from those behind it.

In 2016, Johnnie Walker released the short documentary film Ode to Lesvos. It told the remarkable story of the Greek islanders who opened their hearts to the thousands of refugees who arrived on their shore fleeing war and terror. Global PR and content agency Smarts Communicate, based near Belfast,  have been nominated for Cause Related Marketing Strategy of the Year and they were responsible for the worldwide earned media campaign for the film.

Anomaly worked with Sundance-winning director Talal Derki on the film as part of its “Storyline” initiative for Johnnie Walker. He himself is a Syrian exile who was honored at Sundance for his documentary on the war in his homeland – Return to Homs. Derki said, “This was a deeply personal project, influenced by my life experience of the Syrian and Greek cultures”.

The film highlights the work of the Mercy Corps, the charity that has been working with the Lesvos community. Mercy Corps said of the film:

“As a leader in the global refugee crisis response, Mercy Corps works in Greece to respond to the urgent needs of the most vulnerable people, support their safe passage and uphold the dignity of those seeking asylum. Today, our refugee response provides support to more than 8.3 million people who have fled their homes in 22 countries.

Mercy Corps is grateful that Johnnie Walker has selected us as the beneficiary of this initiative. We hope that people will be inspired by the islanders’ simple, yet extraordinary actions in the “Ode to Lesvos” films.” 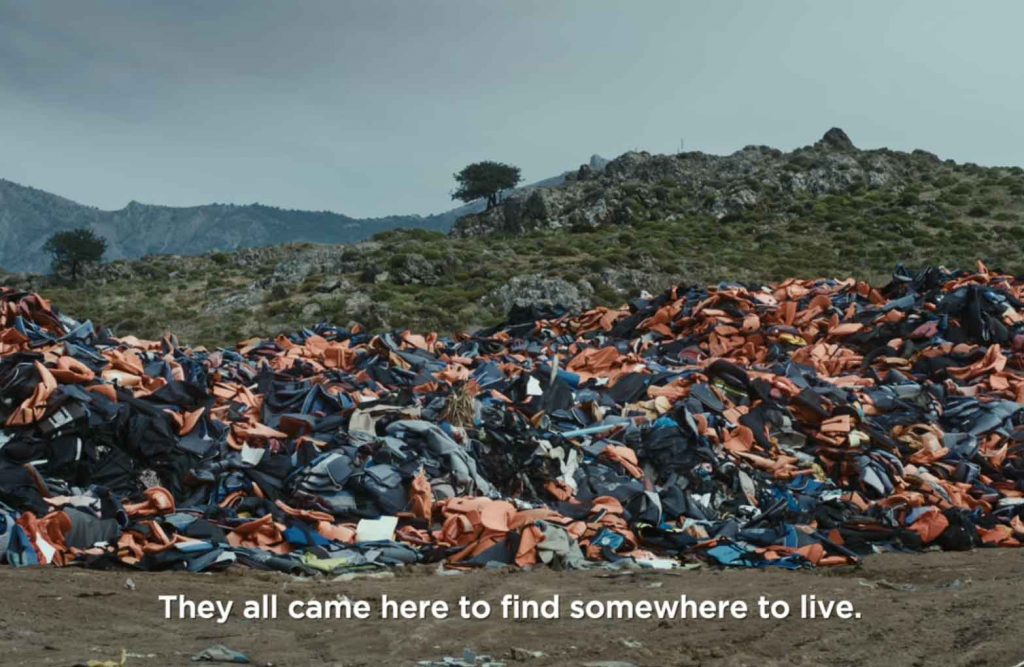 Smarts Communicate on Ode to Lesvos

Selina Wallace, Brand Communications Director, of Smarts Communicate spoke to us of their campaign and told us:

“The film that lies at the heart of this work tells a real human story with a context that is one of the defining news stories of this generation, the refugee crisis. However, Ode to Lesvos shines a light on a lesser told side of that story – that of the islanders of Lesvos – whose lives were changed by the arrival of thousands of displaced people.  Our campaign told the heartfelt stories of the islanders through content rich PR that brought to life the film’s themes of possibility, progress, optimism and hope in the most challenging of situations. It was a privilege to share the inspirational story of these people with the world and to work with a brand that is committed to acting with real purpose in the world.”

She also spoke to us of ethical marketing in general and why they viewed campaigns like this as so important:

“Increasingly, consumers are asking themselves, ‘is this good for my generation?’ Companies that make positive social efforts are working overtime to answer that very question. Strengthening relationships with consumers means building trust and adding value. That’s what ethical marketing is all about for us – the most successful brands build real relationships with their customers and consumers and are brave enough to consider a higher purpose that the brand could serve.”

Johnnie Walker on Ode to Lesvos

“We want to tell inspirational stories that fire people in their desire to achieve more in the world.  Ode to Lesvos was one such story and one way for us as brand to genuinely live our foundational belief in the power of progress.”

A powerful film by an award winning director, a personal project as well for him, which showcased some incredible people. Some of the islanders have been nominated for a Nobel Peace Prize, and this is an important film as people need to be faced with these uncomfortable truths. I was disheartened to see some of the comments in the youtube section, where there were many people who cannot empathise with the suffering of others. A lovely piece of ethical marketing where a company uses its resources and platform to promote a good cause. An informative video which I would recommend everyone watches and I feel the last thing we should say is people can donate to the very important work of Mercy Corps by visiting: www.mercycorps.org/johnniewalker