One of the really interesting iniatives I have come across in recent months is Lightful. Lightful ran a major social media movement to “reclaim social media for good” which went viral in early February, with thousands of individuals, charities and organisations actively calling for more positivity on social media, including Comic Relief, NCVO, the Institute of Fundraising and Whizz-Kidz. I am speaking to Vinay Nair, co-founder and CEO of Lightful about his thoughts on the iniative and ethical marketing in general. 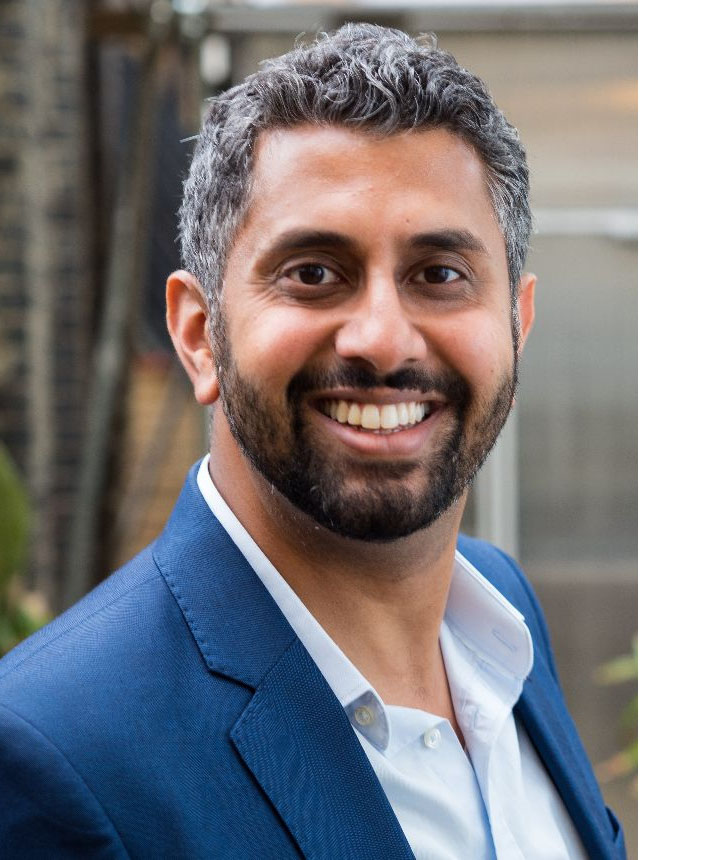 For those people who have not heard of you could you explain a bit about yourself and your background?

My career so far has spanned over two different sectors; the first decade or so was spent working in the private sector in finance and for the last nine years I’ve been working in the social impact sector, including at Social and Sustainable Capital (SASC), one of the largest social impact investors in the UK. My career has been driven by how we can take the tools from the private sector and elements of the social sector to drive more impact and positivity.

As well as my day job as CEO of Lightful, I’m also a practitioner-in-residence at The Skoll Centre for Social Entrepreneurship, Saïd Business School, Oxford University, a lecturer for the Impact Business Leaders programme, Trustee and board chair of the Social Entrepreneurs’ Trust, and a Fellow at the RSA.

Could you tell us about Lightful?

Lightful is a technology for social good company, which I set up with Carlos Miranda and Johnny Murnane in 2015 because we were frustrated at how difficult it was for charities to access the best technology at an affordable price.

We believe that charities, social enterprises and ‘beyond profits’ are doing the most important work and their stories deserve to be heard. We’re a creative digital consultancy and we’ve built a social media management platform to help charities and social enterprises build meaningful relationships, reach more people and raise more funds. We now have over 1000 people, charities and organisations using our bespoke platform, including Street Child, Woman’s Trust and Stay Up Late.

Can you tell us a little about the history of Lightful?

We set up Lightful to bring the latest technology – that has been transforming so many other industries – to the sector we think matters most: charities and social enterprises.

We were initially called Thunderboom – yes, really! A couple of friends and I looked into creating a video multi-channelled network and, in doing so, we soon realised that there was a much greater need and opportunity to look at all of the aspects of digital technology (including social media, CRM, websites) as a way to help charities tell their stories better. 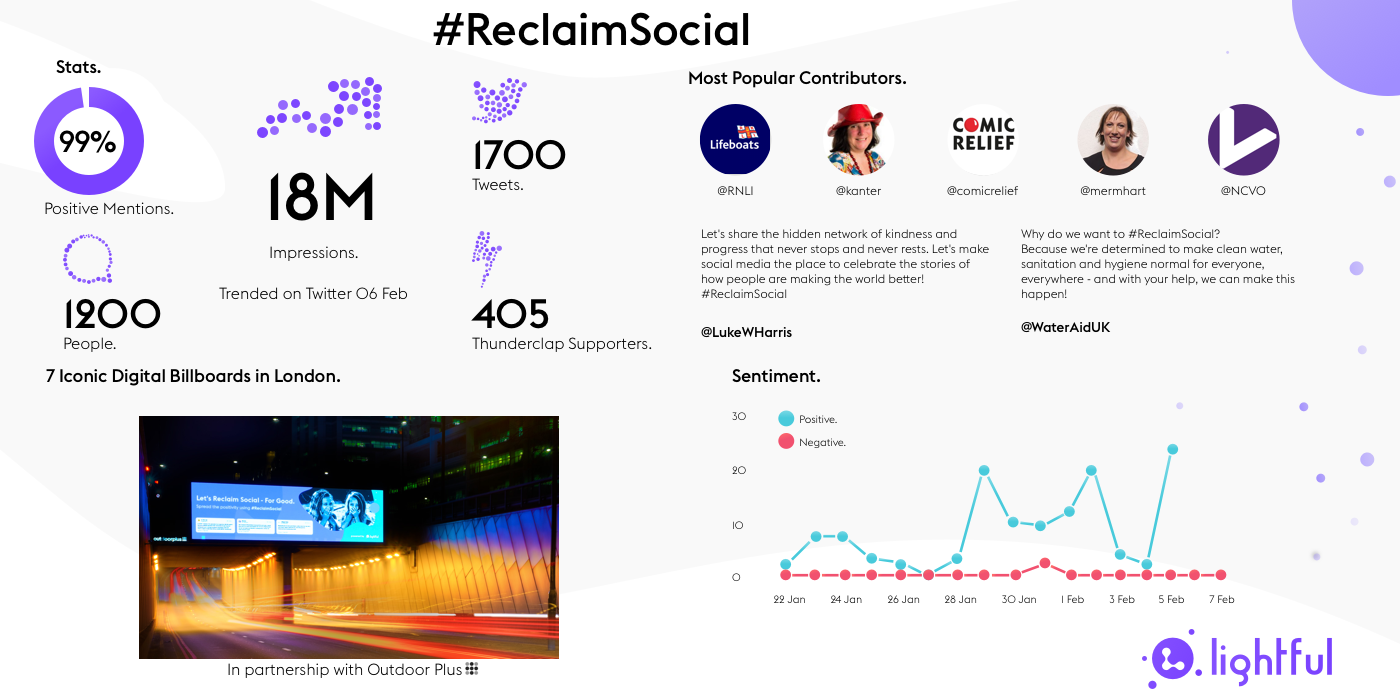 Can you tell us a little about #reclaimsocial?

We’re fortunate to work with so many organisations who have such positive stories to share; whether that’s the impact they’re making, stories of their inspiring staff and volunteers, or how they’re transforming lives.

But the world of social media has become increasingly nefarious – filled with haters, trolls and bots. We don’t think that’s the way social media should be. So, we put our heads together, spoke to a bunch of our partners and clients and coined #ReclaimSocial to reclaim social media for good.

We launched reclaimsocial.com and #ReclaimSocial in February 2018 in a concerted effort to rally people together to share messages of positivity. Organisations and individuals alike highlighted the amazing work they’re doing and celebrated the people who without, this great work would not be possible.

We were thrilled with the uptake and engagement of #ReclaimSocial, having reached over 1,100 people with 19 million impressions and we even trended on Twitter!

Can you tell us why you felt such an initiative was important, and has that opinion changed now?

We realised that while we’re immersed in the charity sector, we were finding that there was increasing negativity that was drowning out all the good. We knew this wasn’t the way social media should be or was intended to be. And if we were struggling to see the positive tweets and posts, what was the public seeing? We had to do something about it, hence #ReclaimSocial, which is not a campaign but a movement.

We felt we didn’t just hit a nerve, but we galvanised a large group of people to recognise that social media can, and must be, used for positive social impact.We continue to post positive #ReclaimSocial messages and we’ve even set up a Facebook group to carry on motivating others to keep the movement going.

Social media has become such an important part of marketing, do you feel there are changes to be made throughout the marketing industry as well as on social channels?

For those of us using online marketing channels, it’s important to recognise and acknowledge that trust is dwindling. Even regulation coming from the top, such as GDPR, is giving people more control over their personal data, which has implications for marketing.

There is the opportunity, however, to turn this from a regulatory challenge to an empowerment of individuals to have greater agency, involvement and understanding of marketing and their own digital footprint. We must champion this transparency.

Ethical marketing is hugely important especially in a sector which, in recent years, has seen record dwindling of trust. We must uphold our values and lead with authenticity.That’s why publications like Ethical Marketing News play such an important role in shining a spotlight on ethical marketing practices.

If you could make one ethical change in how we use social media, what would it be?

It comes down to a sense of being true to your values and recognising that ‘transparency’ isn’t just a buzzword. Increasingly, individuals and organisations are looking for organisations who ‘walk the walk’ and I would encourage everyone to make transparency less of something we talk about and more something that we put into practice. 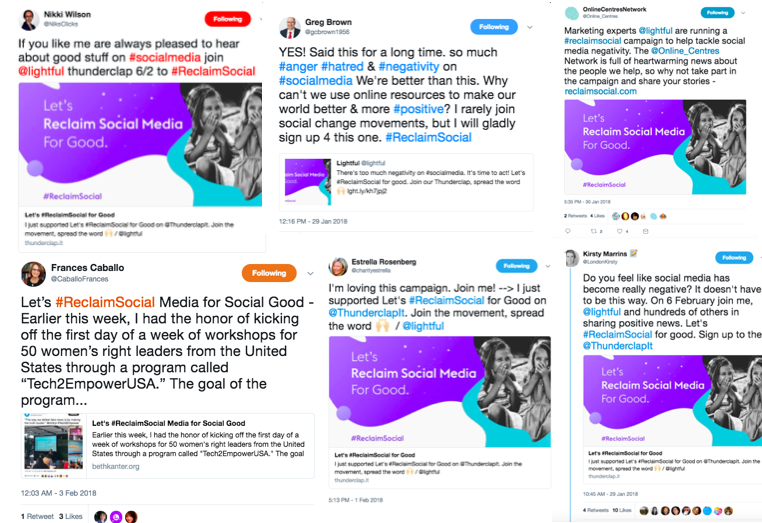 What’s next for Lightful?

We have so much momentum behind #ReclaimSocial that we want to take it beyond the sector and make it more of a populist movement to change the face of social media. We’ll continue to work with partners, grassroots organisations and on thought leadership to amplify the voice of charities and social enterprises.

Has there been any company or person who has influenced and inspired you?

There are so many people who have inspired me throughout my career – too many to name! We’re in a very fortunate position to work with so many organisations who do great work, so that’s a tricky question to answer, but I’ll give you a recent example. One of the amazing charities we support is Woman’s Trust. Its commitment to providing support for women affected by domestic violence and abuse is incredibly inspiring, and this led us to have a bake sale on International Women’s Day to raise funds to support their ongoing work.

Have there been any ethical campaigns by others you’ve particularly enjoyed?

Yes! The first is Stop Funding Hate, run by Richard Wilson. They have such a clear sense of how people can hit the news outlets where it hurts the most – by calling out retailers who advertise in these publications that spew hate and discourse. They are a prime example of how to use social media to galvanise people to action; inspiring individuals to call out big brands who want to protect their reputation.

The second is #GivingTuesday which is the perfect antidote following the commercialism of Black Friday and Cyber Monday. It’s a fantastic opportunity for charities to showcase the work that they do and raise a lot more funds.

Last one, how would you recommend Lightful to those reading and what can you do for them?

We help charities and beyond profits get the most out of technology, whether that’s through social media, digital fundraising or reading our blogs and guides. I’d encourage visiting www.lightful.com to learn more about what we do and to see how we can help your good cause. We’re always looking to work with more organisations to create positive change.

Thank you so much to Vinay for this great interview, all opinions and comments are those solely of Vinay Nair, and all images and photo’s used in this article are (c)Lightful, please check them out.