The Press Release promised something scary… 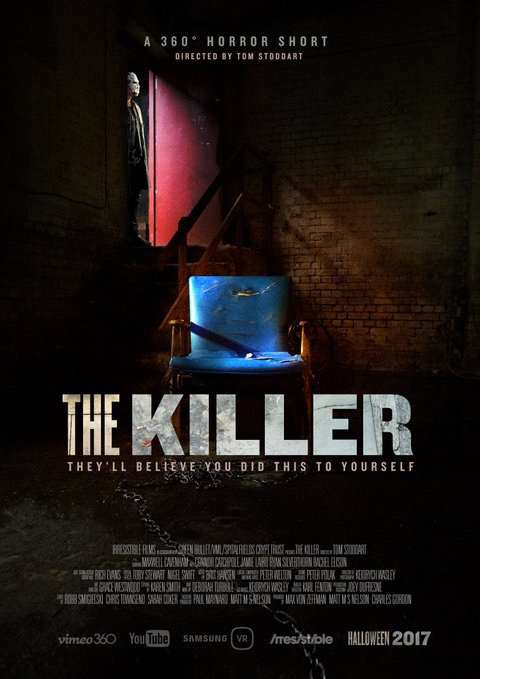 The Killer, a dark and disturbing virtual reality psychological thriller,forces viewers to not onlylose themselves in the storyline but to actually become the storyline, seeing the horrors unfold around them in 360˚.Taking inspiration from cult horror films such as Saw and It Follows, thisfilm is bound to be recognised by horror fans and film lovers alike for its first-person narrative, individuality and hypnotic storytelling.

SYNOPSIS: Through the eyes of an average office worker, the film viewer witnesses being captured by a masked man in a public space. The viewer then experiences the psychological horrors of this imprisonment and torture in a dark and desperate place at the hands of a unhinged and merciless madman. But in the end, it’s the twist that redefines the film and leaves a lasting impression no viewer will soon forget.

“We wanted to create a narrative driven 360 film experience, creating affective cinema in the VR world. Tom (director) and Max (Producer) have brought together a team of crew that have created a dark and unsettling world. Combining amazing art direction from Grace Westwood and a sterling job of stitching and effects work from Peter Welton, this collaborative project is something special.” –Executive Producer Matt M S Nelson.

In many ways the reality of the film is even scarier.

The film is actually not a suburban horror nightmare but is designed to raise awareness of the plight of the homeless by the Spitalfields Crypt Trust.

Each scene in the film is engineered to make the viewer feel what it’s like to be homeless. The script is taken from true stories of people who lived on the streets.

“From the beginning, VML and Irresistible Films were focused on pushing the limits of narrative storytelling in the emerging medium of immersive 360 film and using this to expose a new audience to the realities of London’s alarming homeless problem,” said Robb Smigielski, Executive Creative Director, VML London. “We are raising awareness for an incredible charity, and ultimately asking our audience to reconsider their assumptions about the terrifying reality of homelessness.”

“Anyone who has been homeless will understand this film” said one of the charity’s ex- regular visitors, now volunteer. “I couldn’t drink enough and had no way to get out. I was so depressed and down in a hostel. People around me kept on drinking. I ended up sleeping in a cupboard by a tunnel. Weeks turn into months, it’s endless.”