Madison Avenue Social has launched an important cause-campaign designed to illuminate the collaboration between Cross Pens, Liberty United and their work with the Cook County Sheriff’s Office in Illinois. Focused on the critical mission “Transform a Gun.  Transform a Life,” the social media campaign raises awareness of a joint program that helps transform the remnants of confiscated illegal guns and ammunition into handcrafted Cross X Liberty United Collector’s Edition Pens.

The initiative aims to shift cultural mindset and encourage the creation of writing instruments as weapons, in the fight for peace against gun violence on US city streets.  Liberty United then donates 20% of profits to fund safety and education for at risk children growing up with the threat of gun violence. 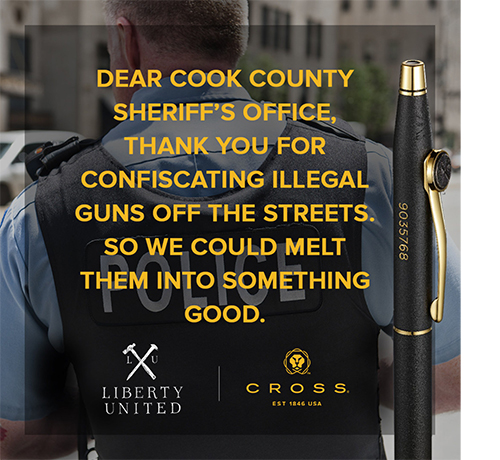 Founded in May 2017 as the first the social media creative agency grounded in mobile tech, Madison Avenue Social’s work with A.T. Cross and Liberty United demonstrates the provocative nature that social media agency takes, as it works to “evoke emotion” in each of their client’s diverse social media communications.

“Each year more than 17,000 American children fall victim to gun violence. Just one child is one too many,” said A.T. Cross CEO, Robert P. Baird, Jr. “Our partnership with Peter Thum and Liberty United allows us to do our small part to help address this.  Mad Ave Social’s creativity is an integral part of the program that’s given us power to create broad awareness for our messages almost immediately, so that we can help make a difference.”

The serial number on each Cross X Liberty United Collector’s Edition Pen was the exact registration number on the illegal confiscated gun. The pens bear different numbers, reflecting the last record of each gun that was used for illegal purposes. Twenty percent of Liberty United profits help provide safety and education for at-risk children growing up under the constant threat of gun violence.

In addition to the Cook County, IL Sheriff’s office, other US city police departments in New Orleans, LA, Newburgh, NY, Philadelphia, PA and Syracuse, NY are partnering with Liberty United and Cross Pens to expand this national effort.

To date, Liberty United has received more than 5,000 illegal guns that have been destroyed and funded programs helping over 3,000 at-risk children.

“Our work on behalf of Cross and Liberty United is one of the most emotion-evoking campaigns we have produced to-date,” said Mad Ave Social President, Deirdre Catucci. “We hope our work will put issues of gun violence prevention on the kitchen table.  It’s a profound responsibility which we take very personally.”