Public relations practitioners hold views on social mobility that are both inconsistent and at odds with most public opinion, according to figures published today in the Chartered Institute of Public Relations (CIPR)’s State of the Profession report. The findings suggest that the profession is as far away as ever from its aspiration to reflect the stakeholder groups it works with.

The report (below) – delivered in partnership with Chalkstream – reveals 37% of PR practitioners think family background has a positive impact on one’s career, a belief shared by only 20% of the wider public. Another 40% in PR believe one’s background has no impact on where they end up, compared to 60% of the public who are of this view. In other words, the impact of family background appears to hold greater significance to people working in PR.

This might suggest that PR practitioners believe success is mainly determined by background, but in fact they are in fact more likely than the public to believe that everyone has a fair chance to go as far as their talent and hard work will take them (41% vs. 35%) and much less likely to think that where you end up is mainly determined by your background  (29% of PR practitioners, 44% of the public).

Within the PR sector itself there is a clear split between those on higher salaries – who are more likely to believe that everyone has a fair chance to go as far as their talent and hard work will take them – compared to those who earn less, who are less likely to think this. 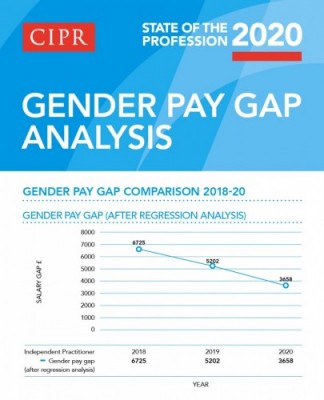 The report also reveals the profession has collectively reduced its gender pay gap by 46% since 2018. After regression analysis the gap between men and women now stands at £3,658. Among practitioners with up to four years’ experience, women now earn £1,687 on average more than men.

However, the pay gap widens with experience with women in Directors, Partners and Managing Directors roles earning over £19,000 less than males in equivalent roles. There are also pay gap differences between organisation types – women in not-for-profits and NGOs earn an average of £3,600 more than men, whereas the pay gap in agencies and consultancies is over £20,000 in favour of men.

Other key findings from the report include:

The survey captured data from before the Covid-19 pandemic but highlights an increasingly professional community serious about continuous professional development, interested in becoming chartered, and recognising the benefits of what being part of a professional body can deliver.

This year’s State of the Profession survey reveals little or slow progress in many of the challenges that have long been identified – most notably in the lack of diversity within the profession – but some positive developments in other areas. We appear to be realising our ambitions of becoming more strategic with more practitioners identifying the need to demonstrate their commitment to professionalism.

However, although the survey highlights the majority of those working in PR might believe everyone has a fair chance to go as far as their talent and hard work will take them, the fact remains we are an overwhelmingly white profession and we know from the 2019 study that the profession is made up of 28% who were educated at fee paying schools. Those practitioners earn £12,000 more per year, on average, than their fellow practitioners who attend state schools. Indeed, this year’s survey shows many in the profession recognise the advantages their privileged backgrounds have provided.

Positively, we have a profession that, to most within it, feels like a community. That’s not by accident and, in the challenging times we have been experiencing, that becomes a lot more than a just a feeling. We should also recognise the efforts to reduce the gender pay gap. We’re not there yet, and there is still much to be done in certain areas of the industry – but I’m delighted to see that figure getting smaller.

I’m most pleased to see a continued drive towards practitioners evidencing their professionalism. The impact of the pandemic will be felt throughout the profession, but this provides hope and assurances of a resilience which will help us to come back stronger.