Alzheimer Scotland has launched a new TV ad campaign called #ImStillMe. The Campaign centres on the lives of 4 people suffering from dementia. The aim of the ads is to try and get the public to donate £5 to the charity. The website says of the campaign: “‘I’m Still Me’ – that’s what Archie, Helen, Henry and Stewart, the faces of our winter TV campaign, are telling us this Christmas. Our funny, kind, mischievous and determined characters are great ambassadors for people living with dementia across Scotland. ”

The stars of the ad all highlight an important issue that the charity feels people should be aware of. 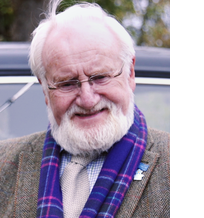 Everyone who meets Archie can’t fail to be charmed by his vivacious personality, warmth and humour.  His outgoing character and zest for life are infectious as his determination to do as much as he can to help others facing challenges in their lives whether it’s dementia, homelessness or loneliness.  Most importantly Archie is an amazing ambassador for people living with dementia within his own community and beyond and is passionate about reducing the stigma surrounding the illness.

Alzheimer Scotland believes that staying connected to your community is hugely beneficial in living well with dementia.

Archie says:  “When I was told I had dementia I was in limbo.  I really took fright because and I had no idea what to expect.  I never moved out my wee house for weeks.  I was just watching the world go by and I wasn’t part of it and that’s not me.  I’m usually out there causing havoc.

Eventually I picked up the phone and said “I need help”, because I was frightened of going out in to my own community.  It was really, really frightening and there was nobody at that time to help me.  That was until someone from Alzheimer Scotland came.  She took me to the Scottish Dementia Working Group and its there that my life changed completely.  Now I cook, now I create havoc everywhere.  But all joking aside it was a life changing moment when this happened”. 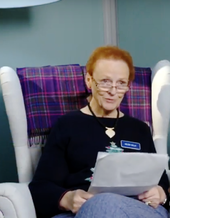 Helen’s smile could light up a room.  When you meet Helen you get wrapped up in her warm and mischievous character and feel instantly at ease.  Helen is a family girl through and through and is loved by her many family members, friends and peers.  She’s a shining example of how being among friends and part of something can really help you overcome your personal challenges.  Helen is a great friend to many and is passionate about getting involved and showing others the importance of peer support.

Helen says:  “When I first found out I had dementia I was in a state of shock.  I suddenly felt very depressed, angry and frustrated.  I had panic attacks and didn’t want to speak to anyone or leave the house.  That was until I was introduced to a worker from Alzheimer Scotland who helped me.

She changed my whole life and outlook toward dementia and showed me how to carry on and lead a normal life just like I always had.  I don’t know what I’ve had done without people like her.  I see people less fortunate than me and I try to help them.  We meet up and go to activities together.  Having dementia doesn’t worry me any more because I have so many new friends and we’re all in the same boat”. 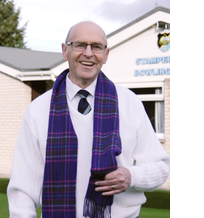 Henry leaves a lasting and meaningful impression with everyone he meets.  His gentle words, kind character, sincerity and understated presence leave you in no doubt that this is a man of substance.  Henry retired from the Police service after serving 30 years and since receiving his delayed diagnosis of dementia in an unsupported manner, Henry has been an advocate for the rights and needs of people living with dementia, their family and carers.  He has also been an advocate of never giving up and doing everything on your bucket list!

Alzheimer Scotland believes that with the right support in place people can and should continue to live well with dementia in their own homes and communities for as long as possible.

Henry says: “The psychiatrist told me I had dementia, there was no cure and to come back in six months time.  I walked out the surgery to my wife and daughter and burst in to tears – it was a shock to the system.  I didn’t feel there was any point in staying alive and that was the hardest moment to overcome.  I met two of the loveliest people you’ll ever meet from Alzheimer Scotland who put me at ease right away.  They told me I had a lot of life left and they introduced me to a programme called ‘Facing Dementia Together’. I’ve done nearly everything on my bucket list now. I do struggle at times but to be honest I’m still here and I’m living well with dementia”. 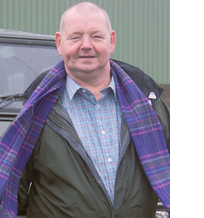 Stewart has a big personality, a can do attitude and is an active ambassador for the Dementia Friends Scotland programme.  When he’s not enjoying his off-road hobby he can often be found giving talks to workplace organisations, schools and groups to help reduce the myths, misconceptions and stigma surrounding dementia. His positive attitude is inspiring.

The message Stewart wants to get across is that younger adults can get dementia too, and it’s vital to diagnose and treat the illness early. Stewart also wants to encourage employers to become ‘dementia friendly’ and be supportive of staff, family of staff and customers alike who may be affected by dementia.

Stewart says:  “When I was told I had early onset vascular dementia at age 51 I thought dementia was only something that older people get. With the support of my employer I was able to continue working for several years.  I had to accurately manufacture rotor blades jet engines and had been in the role for 18 years. I took early retirement after other health problems exacerbated my dementia.  My wife and I became increasingly involved with Alzheimer Scotland. We started using their local services and I even started helping out on interview panels.

This gave me a sense of purpose and helped keep my mind active. Dementia cafés and other services like those run by Alzheimer Scotland are great and we’d like to see more people with young onset dementia at them. They’ve really helped us build a new support network since I retired.”

Anna Devine, Director of Fundraising and Marketing at Alzheimer Scotland speaking to Third Force News, said: “Receiving a diagnosis of dementia can be a devastating and frightening time for both the person with dementia and for their families and friends but life doesn’t stop just because you have had a diagnosis.

“Staying connected to places and people who are important are so important to help those living with the illness and Alzheimer Scotland is working hard every day to put dementia firmly at the heart of the community to help those living with dementia live their lives for as long as possible. It is vital that we raise urgent funds to help us increase this vital support network and raise funds for urgent dementia research.”